A prime target for the development of anti-inflammatories

For the first time, scientists from the Institut Pasteur and Inserm have demonstrated the key role played by a particular molecule in intestinal infection. The study was published online in Immunity on December 12, 2013. The molecule, known as ATP, serves as a trigger signal for the inflammatory response targeting pathogenic agents. Using the Shigella flexneri model, the scientists have also shown how this bacterium is able to block the release of ATP in order to escape this defense reaction.

Discovery of this blocking mechanism could be a milestone in therapeutics: the development of new drugs that mimic this process could open up new possibilities for the treatment of chronic inflammatory diseases, such as Crohn’s disease. 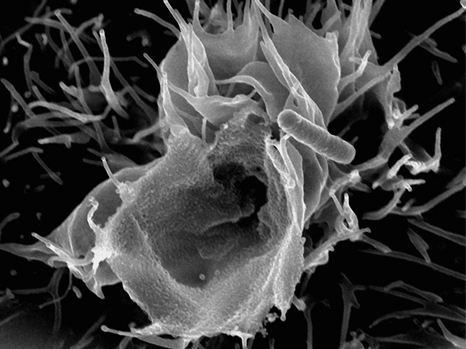 It has been known for some years that the extracellular presence of ATP – a molecule normally found inside cells – is able to alert the body to danger and trigger an inflammatory defense response. Such may be the case when tissue is damaged and cell contents are released. Yet, whether an infectious agent would be capable of triggering the same mechanism remained unclear.

The team led by Philippe Sansonetti, who heads the Molecular Microbial Pathogenesis Unit (Inserm U786 / Institut Pasteur), in association with scientists from the University of Toulouse and the Collège de France have recently shown in vitro and in vivo that infection with enteric pathogenic bacteria – in this study Shigella, Salmonella and enteropathogenic E. coli – induces the cell to actively release ATP into the extracellular environment: in the presence of the bacterium, intestinal epithelial cells open cell surface channels, allowing ATP molecules to escape. By binding to extracellular receptors, ATP triggers a chain of reactions that drive the inflammatory immune response designed to eliminate the threat of infection.

The scientists also proved that the Shigella flexneri bacterium is capable of blocking this release of ATP by injecting an enzyme directly into the infected cell. The enzyme acts by closing the channels. This is the first time a pathogen has been observed to have the ability to suppress this mechanism, thus allowing it to escape defenses put in place by the body. This discovery underlines the importance of ATP as a key regulator of intestinal inflammation.

Although inflammation is a natural defense mechanism that plays an essential role in tissue response to attack, it persists abnormally in some cases. It then becomes chronic, and can lead to inflammatory diseases. These diseases result in a malfunction of the immune system, which attacks the body’s normal components. By showing this potential to halt the inflammatory process, the study highlights this process as a new, prime therapeutic target for the development of anti-inflammatory drugs.

Currently, there are no anti-inflammatory drugs on the market that targets the release of ATP. However, this release mechanism could have an important, as yet undefined part to play in the future treatment not only of certain chronic inflammatory diseases of the intestine, such as Crohn’s disease, but also other pathologies such as cancer, obesity, type 2 diabetes or arteriosclerosis.