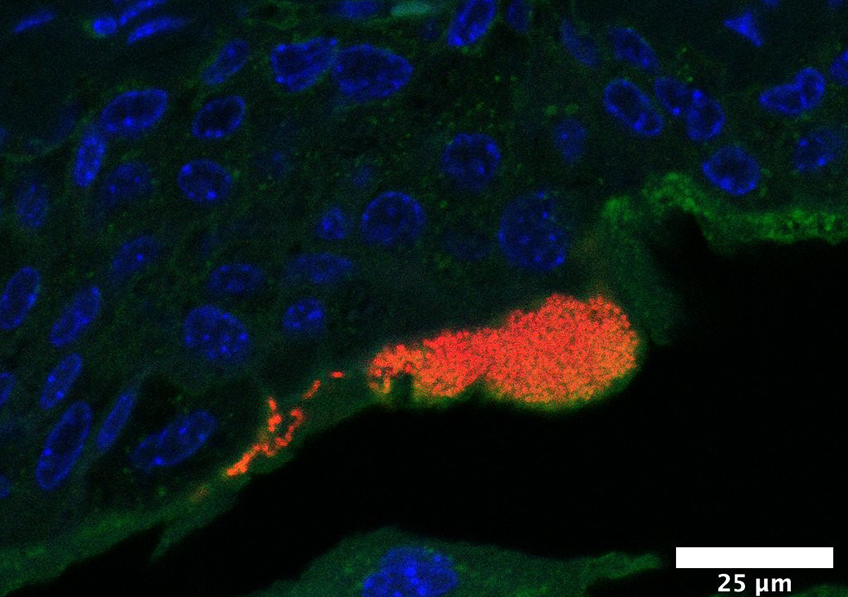 During a urinary tract infection, uropathogenic Escherichia coli bacteria (in red, their DNA) form bacterial communities within superficial cells of the bladder (in blue, their nuclei; in green, their cellular sugar content), here 6 hours following an infection reproduced in mice. © Inserm/Motta, Jean-Paul/Chagneau, Camille

Urinary tract infections affect over 50% of women, in some cases recurrently. E. coli bacteria are very often implicated in their development. For the first time, researchers from Inserm, Toulouse University Hospital, INRAE, Université Toulouse III – Paul Sabatier and École nationale vétérinaire de Toulouse have identified the presence of a toxin produced by these bacteria in the urine of patients, which is thought to damage bladder cell DNA. These findings pave the way for new reflection on how to refine the treatment of patients prone to recurrent urinary tract infections. The study was published in Plos Pathogens on February 25, 2021.

Every year, 150 million people are affected by urinary tract infections. These are more common in women, with more than one in two experiencing them at some point in their lives. This represents a major public health problem, especially since the frequent need for antibiotic treatment is promoting the emergence of antibiotic resistance.

Urinary tract infections develop when the urogenital area is contaminated with bacteria from the gut microbiota. Escherichia coli (E. coli) bacteria are implicated in 80% of these infections[1] and have been the subject of several years of study by Eric Oswald and his team at the Digestive Health Research Institute (Inserm/INRAE/Université de Toulouse III Paul Sabatier/École nationale vétérinaire de Toulouse) in collaboration with various research teams in Toulouse.[2]

The scientists are particularly interested in the virulence factors of these bacteria, namely their ability to infect or damage the tissues of the host. They had already shown that under certain conditions E. coli in the intestinal tract can produce a toxin, colibactin, which is associated with an increased risk of colorectal cancer. In this new study, the team analyzed the urine samples of 223 adults with a urinary tract infection linked to the presence of E. coli and who were being treated in the emergency room of Toulouse University Hospital.

They identified a biomarker reflecting the presence of colibactin produced by the E. coli in at least 25% of the urine samples collected. This is the first time that this toxin has been identified in the context of a urinary tract infection and that researchers have provided direct evidence of its production during infection in humans.

In an attempt to better understand and characterize the effects of colibactin in the context of urinary tract infections, the researchers turned to animal models, showing in mice that the toxin is produced during urinary tract infection with E. coli and that it induces damage to the DNA in the bladder mucosa cells.

“These experiments allow us to step outside of a highly theoretical framework and show that, during a urinary tract infection, colibactin can have a genotoxic effect: the damage to the DNA does not completely repair itself and genetic mutations can occur. While we can only speculate on the impact of these mutations at this time, it is likely that they are linked to an increased risk of bladder cancer,” clarifies Oswald.

While these findings in animal models cannot in their current state be applied to humans, the researcher and his team believe that they could nevertheless lead to more extensive and targeted monitoring of people who are prone to recurrent urinary tract infections.

In addition, a better understanding of the links between gut microbiota and recurrent urinary tract infections is considered a priority. “We could consider implementing more specific management of patients suffering from regular urinary tract infections, with systematic screening for colibactin markers in their urine.And, more proactively, propose therapeutic approaches aimed at modulating the composition of their gut microbiota, which represents the main reservoir for the E. coli implicated in these infections,” emphasizes Oswald.

More particularly, the team is working on several research projects surrounding probiotics and the intestinal reservoir to limit harmful populations of E. coli in the microbiota and promote the emergence of “good bacteria”. A domain in which they have patented with Inserm-Transfert a non-pathogenic strain of E. coli that is capable of waging “biological warfare” on uropathogenic strains.

[1] This is referred to as uropathogenic Escherichia coli (UPEC).

[2] In particular, the coordination of a French National Research Agency (ANR) project in partnership with the company VibioSphen and an Inserm team working on iron metabolism.