The 2014 Lasker Award has just been won by Alim Louis Benabid, Director of Inserm Unit 318 “Preclinical Neurosciences” from 1988 to 2006, and winner of the 2008 Inserm Prix d’Honneur for his work on deep brain stimulation for the treatment of Parkinson’s disease.

Since 1945, the Lasker Award has distinguished the most brilliant researchers who have contributed to major advances in the diagnosis, treatment and prevention of human disease. In the international community, it is widely considered a precursor to the Nobel Prize. Prof. Benabid is the 8th French person to receive this prize. 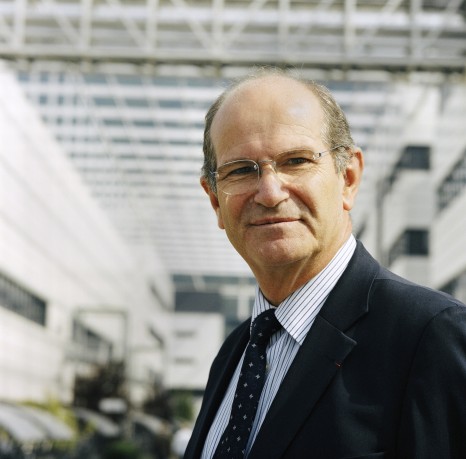 Born on 2 May 1942 in la Tronche, near Grenoble, Alim Louis Benabid spent his childhood in Sétif in Algeria. He returned to France to attend secondary school in Grenoble, and received his higher education in medical and science faculties in Paris.
Following his hospital residency, Doctor of Medicine (1970), Doctor of Science in Physics (1978) and a period as Professor of Biophysics at Université Joseph-Fourier in Grenoble, he directed the Inserm Unit 318 “Preclinical Neurosciences” from 1988 to 2006.
Alim-Louis Benabid focused his research on several brain pathologies, especially tumours and abnormal movements, and developed the surgical technique known as stereotactic (or stereotaxic) surgery, which makes it possible to target certain areas of the brain with a high degree of accuracy. He extended its applications to the treatment of patients with drug-resistant Parkinson’s disease and the treatment of other brain disorders.
From 1987 to 1991, Alim-Louis Benabid and his team developed a technique that involves implanting electrodes directly into the brains of patients with Parkinson’s disease in order to apply high-frequency electrical stimulation. They were thus able to eliminate the motor symptoms (tremor, akinesia, rigidity) of the disease. This intervention shows remarkable efficacy, with very low morbidity, and allows a reduction in drug-based treatments. It presently constitutes the most effective surgical treatment for Parkinson’s disease, and also provides basic data of considerable theoretical value.
Alim-Louis Benabid has also extended the indications for deep electrical stimulation to other pathologies, namely dystonia, refractory epilepsy, and obsessive compulsive disorder.
The introduction of electrodes into the brain, a technology developed under his direction, was greeted as a major discovery by the international scientific community.
Alim-Louis Benabid has subsequently focused his efforts on understanding the mechanisms of action of high-frequency deep brain stimulation and demonstrating its potential long-term effects, including its neuroprotective effects, on the natural course of Parkinson’s disease. He is also eager to identify in detail the effective targets and neuronal networks involved in this intervention.


Yves Lévy, Chairman and CEO of Inserm, wishes to convey his warmest congratulations to Alim Louis Benabid: “This prestigious award is a fitting tribute to his brilliant work on Parkinson’s disease, which has significantly improved the everyday lives of patients. The awarding of this internationally recognised prize confirms the excellence of French biomedical research. It also emphasises the importance of carrying out basic research and high-level clinical research in parallel.”

A scientific advisor for the French Atomic Energy Commission (CEA) since 2007, today he combines his research in this area with research carried out in the field of nanotechnology for the CLINATEC project. Developed by the leaders of technological research at CEA, in partnership with Grenoble University Hospital, Inserm and the Université Joseph Fourier in Grenoble, this biomedical research laboratory, devoted to the health-related applications of micro-nanotechnologies, is responding to a major public health challenge: developing new therapeutic approaches for brain diseases.

Read and view the profile of Alim Louis Benabid, winner of the 2008 Inserm Prix d’Honneur :

Researchers described how the cerebellum modulates our ability to socialize

The cerebellum is essential for sensorimotor control but also contributes to higher cognitive functions including social behaviors. An international research consortium uncovered how dopamine in the cerebellum modulates social behaviors via its action on D2 receptors (D2R). These new findings pave the ...