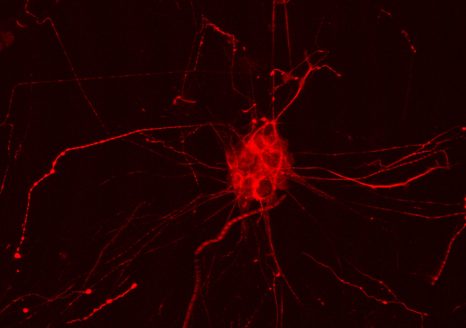 An international consortium has identified rare variants in two new genes that markedly increase the risk of developing Alzheimer’s disease (AD). The work was led by two research groups in France (headed respectively by Gaël Nicolas, Rouen and Jean-Charles Lambert, Lille) and a group in the Netherlands (headed by Henne Holstege, Amsterdam). The new results provide a better understanding of the genetics of AD and open up new research themes on more relevant in vitro and in vivo models. The consortium’s findings are also likely to catalyze the development of new strategies for treating AD. The results were published in the journal Nature Genetics in November 2022.

As the most prevalent neurodegenerative disease, AD affects about 55 million people across the world – 4% of whom are under the age of 65. It is a complex, multifactorial disease caused by interactions between many genetic and non-genetic predisposing factors. Given that AD has a large genetic component, the characterization of these factors is a major challenge for basic research and therapeutic development.

Our knowledge of the involvement of common gene variants (those present in more than 1% of the general population) in AD has improved enormously over recent last years, through the discovery of 75 chromosomal/gene regions associated with the risk of developing the disease. However, the role of rare or even very rare variants has not been extensively studied. In fact, these variants might contribute significantly to genetic predisposition to AD as a result of their direct biological effects and their great diversity.

It is in this context that a large international consortium has identified a number of rare mutations in two genes that markedly increase the risk of developing AD. Along with their European and American colleagues, researchers from the INSERM, the Pasteur Institute in Lille, Lille University Medical Centre, the University of the Lille, the University of Rouen Normandy, and the French National Reference Centre for Patients with Early-Onset Alzheimer’s Disease (Centre national de référence pour les malades Alzheimer jeunes (CNRMAJ)) at Rouen University Medical Centre and from the Amsterdam University Medical Center performed a high-throughput sequencing study of 16,032 AD patients and 16,522 controls. This sequencing approach provides the most precise possible picture of an individual’s genetic variants.

By specifically studying the DNA regions that code for the proteins in our body (the exons), the researchers were able to map deleterious, rare variants that might change the corresponding proteins’ biological functions. The researchers confirmed the pathological role of rare variants in the SORL1, TREM2 and ABCA7 genes and, for the first time, highlighted potentially pathological variants in two other genes (ATP8B4 and ABCA1). The potentially pathological role of variants in one other gene (ADAM10) remains to be confirmed.

Some of the rare variants in these genes are associated with a significantly greater risk of developing AD in general and early-onset forms of the disease in particular.

Better understanding the mechanisms of AD

The identification of the effects of these rare variants should provide a better understanding of the mechanisms that underlie AD.

In fact, two disease pathways have already been well documented in the AD brain: the accumulation of beta-amyloid peptides, and changes in and the accumulation of Tau protein. Importantly, some of the genes studied by the researchers are involved in the production or aggregation of beta-amyloid peptides – confirming the latter’s central role in the development of AD. Furthermore, the present research confirmed previous reports of the importance of microglial cells (cells that help to remove waste from the brain) in AD.

These results from the largest yet sequencing study in this field constitute a major step forward in our understanding of the genetics of AD and the underlying biological mechanisms. Furthermore, these results will open up new research themes on more relevant in vitro and in vivo models in which the newly identified genes are knocked out. By continuing this work, the consortium’s scientists’ also hope to foster the development of new strategies for treating AD.