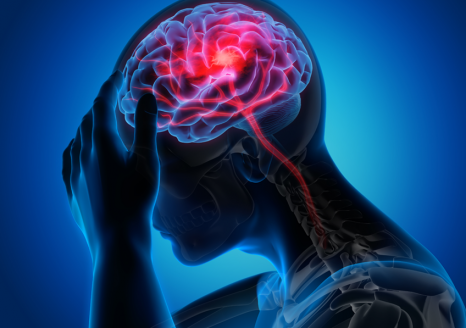 Every year in France, 140,000 people have a stroke1. Around 80% are ischemic strokes or cerebral infarctions, which occur when a brain artery is obstructed by a blood clot. Studies have shown that the risk of ischemic stroke is increased by the use of antipsychotics: medications with antidopaminergic2 properties that are commonly prescribed in psychiatry. Researchers from Inserm and Université de Bordeaux (Bordeaux Population Health Research Center) and Bordeaux University Hospital evaluated the ischemic stroke risk associated with exposure to other antidopaminergic medications—antiemetics, which are very commonly used in the symptomatic treatment of nausea and vomiting. The findings of this study, which were obtained by analyzing French national health insurance reimbursement data, show a link between the use of these medications and the risk of ischemic stroke. These findings have been published in British Medical Journal.

Since the early 2000s, the use of antipsychotic medications indicated in psychiatry has been associated with an increased risk of ischemic stroke. This risk, which has been demonstrated for all of these medications with antidopaminergic properties, increases with age and the existence of dementia. Given that the mechanisms behind this phenomenon have not been elucidated, one possible hypothesis is the antidopaminergic action of these medications. The antiemetics—domperidone, metoclopramide and metopimazine—used in the symptomatic treatment of nausea and vomiting of various causes (acute gastroenteritis, migraine, chemo- or radiotherapy, or following an operation) are other medications that possess this property.

Prior to this, there had been no studies published evaluating the risk of ischemic stroke associated with exposure to antidopaminergic antiemetics. Yet these are very commonly used medications: in 2017, over 4 million people in France had at least one reimbursement for metopimazine, the antiemetic most often used.

Researchers from Inserm, Université de Bordeaux and Bordeaux University Hospital decided to take a closer look at this risk. They conducted a “case-time-control” study3 using French national health insurance reimbursement and hospital admissions data. In this type of study, the potential use of the medication in the period immediately preceding the stroke (here 14 days) is compared with the same use during an earlier period (here more than one month preceding the stroke) in which it could not have caused the event. More extensive use in the period immediately preceding the stroke suggests that the medication may well have played a role.

This method, in which the subject is their own reference, automatically takes into account personal risk factors for ischemic stroke, such as smoking, body mass index, physical activity, and dietary habits. Other factors that may vary over the short follow-up period in a given individual were considered, including the use of medications that present a risk for stroke (such as vasoconstrictors) or those that on the other hand prevent this risk (anticoagulants, antiplatelet agents).

The researchers began by analyzing the data for 2,612 adults hospitalized for a first ischemic stroke and who had started antiemetic treatment in the 70 days prior to it. In these subjects, they found that the use of antiemetics was more extensive in the days preceding the stroke, with a peak in treatment initiations during this period. This finding suggests an increased risk of ischemic stroke in the first days of using these medications (Figure below). 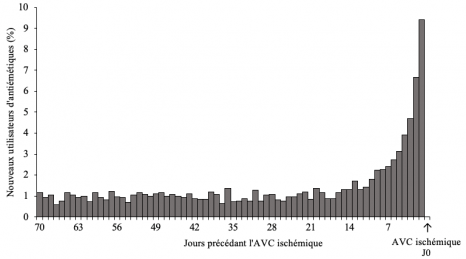 To eliminate bias in the results that could occur should medication use vary greatly over time in the general population (for example during outbreaks of acute gastroenteritis), the study went on to consider, over the same period, a randomized group of 21,859 people who had not had a stroke. In this group, no peak or excessive use of antiemetics comparable with that seen in patients having presented a stroke was found (Figure below). 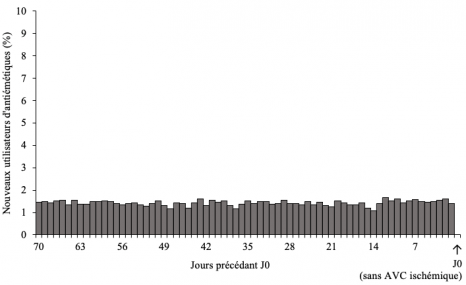 Distribution of antiemetics initiation within the 70 days preceding the reference date (N=21 859 subjects without ischemic stroke).

“This first study provides a strong signal concerning medications that are widely used in the general population. In the immediate term, it appears to be very important to have these findings replicated in other studies—studies which could also provide indications on the frequency of this adverse effect, which we could not measure here given the methodology chosen. Having accurate information on the subtypes of ischemic stroke and their location would also allow us to explore the mechanisms involved,” explains Anne Bénard-Laribière, one of the authors of the study.

1Stroke, the leading cause of acquired disability in adults, Inserm, 2019 (only available in French)

2 Antidopaminergics block the action of dopamine, a neurotransmitter involved in regulating behavior, muscle tone and movement coordination, among other things.

3 This study was conducted as part of the work program of the DRUGS-SAFER Center, funded by the French medicines agency (ANSM) and partner of the EPI-PHARE GIS.

Risk of first ischemic stroke and use of antidopaminergic antiemetics: nationwide case-timecontrol Study