Caffeine is the most consumed psychoactive substance in the world, including during pregnancy. Christophe Bernard, Inserm research director, and his team within the “1106 Institut de Neurosciences des Systèmes” unit (Inserm/Aix-Marseille University), have recently described certain harmful effects after caffeine consumption by female mice during pregnancy on the brains of their offspring. This work, despite performed in rodents, suggests that careful studies should be performed to assess the consequences of caffeine consumption by women during pregnancy.

These results are being published in the Science Translational Medicine review of 7th of August 2013.

Many substances have a direct effect on brain function, by modifying the activity of neurons. This applies to antidepressants, anti-anxiety drugs, nicotine, alcohol and recreational drugs such as cannabis, heroin, cocaine, etc. These substances, known as psychoactive substances, bind to proteins present in brain cells and modify their activity. When consumed during pregnancy some of these psychoactive substances can affect the construction of the fetal brain, as the proteins to which they bind play key roles in brain development. The consumption of some of these substances is thus strongly discouraged during pregnancy.

Researchers from the “1106 Institut de Neurosciences des Systèmes” unit (Inserm/Aix-Marseille University) reproduced regular coffee consumption in female mice (equivalent to 3 cups of coffee a day for a human), throughout pregnancy until the weaning of the offspring, by adding caffeine to the drinking water. 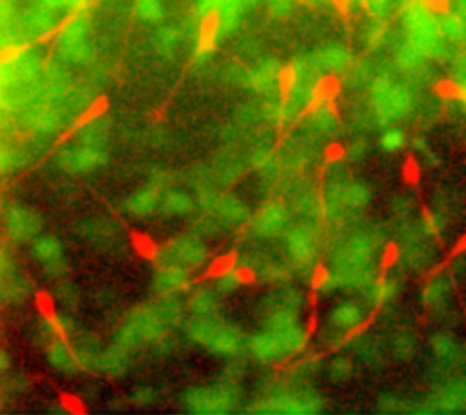 The research team managed to identify the mechanism responsible for the deleterious effects of caffeine on the developing brain. During development, some cells are generated in specific cerebral regions, and later migrate to the regions where they will function. This is the case for neurons releasing GABA – a principal chemical mediator in the brain – which later migrate to, among other locations, the hippocampus, a brain region that plays a key role in memory formation.

Caffeine directly influences the migration of these neurons, which contain a particular receptor called A2A. When caffeine binds to these A2A receptors, the migration speed of these neurons is decreased. The cells therefore reach their intended destination later than planned. This delayed migration affects the construction of the brain with effects seen at birth (cellular excitability and susceptibility to seizures) and during adulthood (loss of neurons and memory deficits on certain tests).

Given their observations in mice, the authors suggest developing longitudinal studies—both short-term and, above all, long-term—to assess the consequences for newborns. Newborns may be exposed to caffeine, either during pregnancy and/or during breastfeeding, or if the child is treated for sleep apnea using a caffeine citrate based treatment.

“This study is the first demonstration of the harmful effects of exposure to caffeine on the developing brain. Although this study raises the question of caffeine consumption by pregnant women, it is necessary to reiterate the difficulty of extrapolating these results obtained in rodents to the human population without taking into consideration the differences in brain development and maturation between the species”

, highlighted the main author of the study.
TO CITE THIS POST :
Press release – Inserm press room Caffeine consumption during pregnancy and its effects on the brain during development Link : https://presse.inserm.fr/en/caffeine-consumption-during-pregnancy-and-its-effects-on-the-brain-during-development/9083/

See photos and video on the subject on Serimedis, the image bank of Inserm