Creation of first accelerators of technological research at Inserm 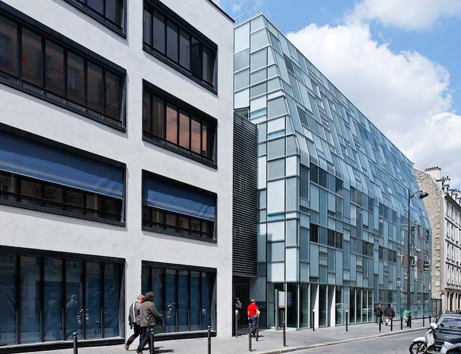 Inserm is launching its first accelerator of technological research according to the objective that is part of the Institute’s strategic plan 2016-2020. This first “Biomedical Ultrasound” ART will be dedicated to research and the use of ultrasound in medicine, particularly in the field of cancer diagnosis and treatment, as well as cardiovascular and neurological diseases. This new therapeutic framework consolidates multiple skills within a single unit in order to develop a high capacity for innovation and to provide this to other Inserm laboratories or hospitals. The biomedical ultrasound ART will be based at ESPCI Paris, a talent pool for future leading engineers and researchers.

Research is now becoming more and more interdisciplinary in order to compete and to generate real progress. This is the philosophy behind the first accelerator of technological research established by Inserm in the field of biomedical ultrasound. To achieve this goal, physicists, biologists, clinicians and engineers capable of taking the technological constraints into account, are translating the concept into usable and transferable tools for other researchers and physicists that will be working at the same site.

Innovations stemming from the “Biomedical Ultrasound” ART will be designed so that they can be transferred to other Inserm laboratories or hospitals within the three major areas of medical research — cancer, cardiovascular diseases and neuroscience.

Researchers hope to offer in the near future:

– Brain-computer interface for treating major neurological disorders such as depression;

– Portable smart sensors capable of measuring and storing a variety of functional parameters;

– Ultrasound imaging systems for the remote delivery of drugs to tumours under perfectly controlled conditions, or to activate these drugs remotely in the targeted area only.

A group of high-level Inserm engineers will continue to accompany the physicists from the “Wave Physics for Medicine” team (Inserm/CNRS/ESPCI Paris) led by Mickael Tanter, in order to further the development of new technology emerging from the laboratory. These engineers will also be in charge of making this technology simple to use, consistent with medical standards, training new users and constantly improving the performance of these tools.

“In order to make major medical advances, it is now becoming more essential to provide innovative technology shortly after its creation. Many interdisciplinary partnerships already exist between hospitals, research centres and our “Wave Physics for Medicine” team. Our laboratory has already been the source of major industrial success, such as SuperSonic Imagine (Aixplorer ®) and Echosens (Fibroscan®), two devices now used by medical teams to reduce liver biopsies for cases of hepatic fibrosis and for cases of suspected cancer tumours. Many other discoveries are currently being developed and our collaborations will be helped and strengthened by ART staff dedicated to deploying technologies to partners. The “Biomedical Ultrasound” ART shall act as a genuine accelerator for new discoveries in medicine” says Mickael Tanter.

The ART will be housed on the new premises at ESPCI Paris (City of Paris Advanced School of Industrial Physics and Chemistry) located in the heart of Paris.

Created in 1964, the French National Health and Medical Research Institute (Inserm) is a public scientific and technical research establishment, under the joint supervision of the French Ministry of Education, Higher Education and Research and the French Ministry of Social Affairs, Health and Women’s Rights. Inserm is the only French public body dedicated to biological and medical research and human health, and occupies a position along the entire pathway from the laboratory to the patient’s bedside. Its researchers study all diseases from the most common to the most rare.

ESPCI Paris is unique place at the centre of Montagne Sainte-Geneviève in the fifth arrondissement, which combines education, research and innovation. The school is characterised by its high-level scientific training and interdisciplinary approach, strongly backed by research excellence, combining fundamental science and openness towards applications and innovation. Housing 9 joint research units (UMR), the school is recognised worldwide for research excellence in fundamental and applied science and drives innovation within the industry. It was founded as an engineering school in the City of Paris in 1882. A paragon of French education, the school has 6 Nobel Prize laureates since its inception. The “Wave Physics for Medicine” team from the “Waves and Imaging” unit at Institut Langevin is based at the school.