Defective connections throughout the brain involved in certain autistic disorders

Researchers at Neurocentre Magendie (Inserm/University of Bordeaux) have just shown how altered connections between cells of the nervous system are involved in fragile X syndrome, a cause of severe autistic spectrum disorders. Using MRI, Andreas Frick, Inserm Research Fellow, and his team have actually observed, in a mouse model of this syndrome, an alteration in the connections and communication between different areas of the brain. These new data are likely to explain certain symptoms of autistic spectrum disorders, such as hypersensitivity to sensory information and alterations in visual perception.
Details of this work are published in the 20 November 2015 issue of Science Advances.

Recent estimates from the US Center for Disease Control suggest that one child in 68 suffers from Autistic Spectrum Disorders (ASD). ASD are neurological disorders characterised by a spectrum of symptoms, including problems with social interaction and communication, abnormal processing of sensory information, and stereotypic repetitive behaviours.
It has long been suggested that the brain of individuals with autism shows different connections. However, there is still no consensus either in regard to a model for these differences, or a possible link between these differences and the symptoms expressed by people suffering from these disorders.
A theory is currently emerging among neuroscientists at international level that suggests that the brain of individuals with ASD is “hyper-connected” at local level, but that overall, the different areas of the cortex are functionally “disconnected” from one another. The local connections can “process” a specific type of information (some aspects of vision, for instance). Conversely, longer range connections allow the brain to integrate more complex information from parts of the brain that often deal with different aspects. This latter type of connection is therefore needed for fine perception and understanding of our external environment. 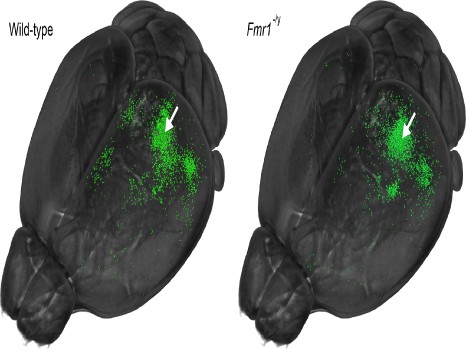 Reorganisation of local and long-range connections in a mouse model of autism (right) and a wild-type mouse (left)
Neurons that become fluorescently labelled (in green) following injection of a tracker dye into the primary visual cortex (white arrow) send projections to the visual cortex and are distributed throughout different regions of the brain. In the fragile X mouse model (Fmr1-/y), one can observe a high density of neurons in the visual cortex (local connections), but a reduced number of neurons at a distance from this region (long-range connections).

Figure taken from Haberl et al. Science Advances 20 November 2015; 10.1126/sciadv.1500775. This figure is licensed under CC BY-NC. Modification of Figure 2a from the publication (modified thresholding and viewing angle, and removal of red mark indicating the point of injection).

To study how the brain network is changed in ASD, Andreas Frick and his colleagues used a mouse model of fragile X syndrome (FXS, a neurodevelopmental disorder closely linked to autism). In 2014, this same team had observed, in these mice mimicking ASD and FXS, alterations in the manner of reacting with sensory information (especially information associated with touch), and described a mechanism explaining the neurobiological changes underlying this phenomenon .
In the present work, the researchers from Andreas Frick’s team (in collaboration with a Dutch team) used magnetic resonance imaging (MRI), a technique frequently used in humans, to better demonstrate the disruption of connections between the neurons. Indeed, their results show disorganisation of the nerve fibres of the corpus callosum of these mice. The corpus callosum contains nerve fibres that connect the neocortical areas to one another and to other regions of the brain.
“Together, the brain connections work like a motorway, enabling traffic to be distributed to different parts of a town, as well as to other towns and villages on the outside,” explains Andreas Frick. The researchers wanted to take a closer look at the role of neocortex, which processes visual information.
Overall, functional MRI indicated reduced communication between different areas of the brain.
All these results support the idea that local connections are increased in FXS/ASD, but that long-range connections are reduced. As a result, this work confirms the long-held assumptions (mentioned above), and also provides an explanation for some of the symptoms of ASD and FXS. For example, over-processing of local information and/or an inability to integrate information coming from multiple sources may explain altered sensory perception. Alterations in visual perception, characteristic of ASD, may be explained by over-processing of fine detail or structures at the expense of the overall picture.
“MRI techniques presented in our work are also routinely used in humans, and therefore constitute a method applicable to patients for measuring changes in connections,” explain the researchers. “Transposed to humans, our results could make it possible to change the manner of evaluating new therapeutic approaches for treating FXS and ASD, and to better understand the potential role of modified connections in other psychiatric or neurodevelopmental disorders,” they conclude.
TO CITE THIS POST :
Press release – Inserm press room Defective connections throughout the brain involved in certain autistic disorders Link : https://presse.inserm.fr/en/defective-connections-throughout-the-brain-involved-in-certain-autistic-disorders/21521/