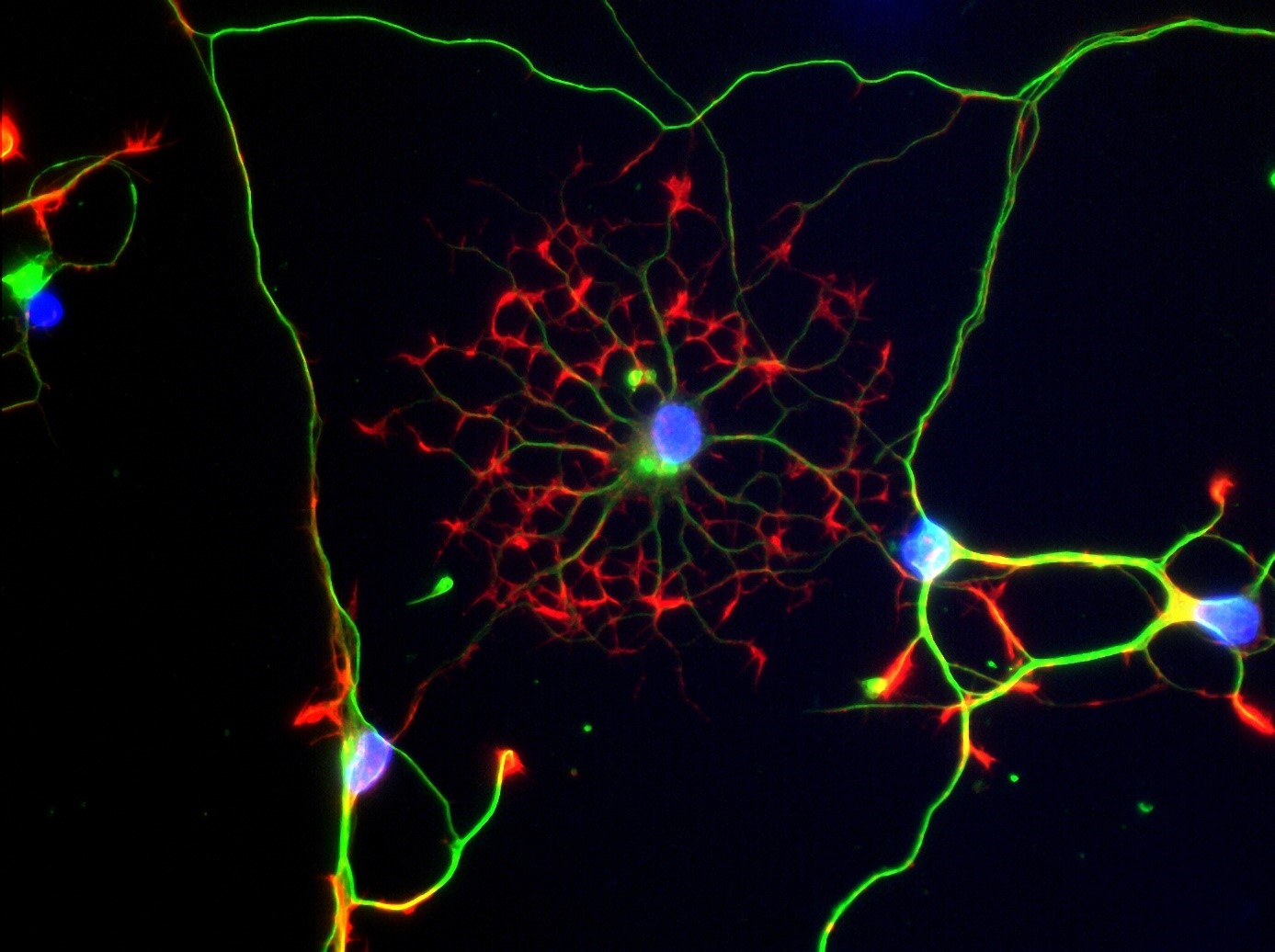 In a culture of neurons, feeder cells and astrocytes (star-shaped cell in the center in red) cohabit. Marking of tubulin in green, actin in red, and nuclei in blue. Researchers have focused on these cells to understand the impact of cannabis use on sociability.©Inserm/Saoudi, Yasmina/Ballet, Sandrine

Cannabis use can lead to behavioral changes, including reduced social interactions in some individuals. To better understand the phenomenon, Inserm researcher Giovanni Marsicano and his team from NeuroCenter Magendie (Inserm/Université de Bordeaux), in collaboration with Juan Bolaños’ team from the University of Salamanca, have identified for the first time in mice the cerebral mechanisms underlying the relationship between cannabis and reduced sociability. Their findings have been published in Nature.

Regular exposure to cannabis may have a harmful impact on sociability. For some consumers, studies show that it may lead to withdrawal and reduced social interactions. However, the brain network and the mechanisms involved in this relationship were unclear until now.

In order to learn more about the subject, a group led by Inserm researcher Giovanni Marsicano at NeuroCenter Magendie (Inserm/Université de Bordeaux)[1] has joined forces with a Spanish team from the University of Salamanca led by Juan Bolaños[2].

More broadly, their work is aimed at improving our knowledge of how cannabinoid receptors (the brain receptors that interact with chemical compounds in cannabis) work.

In their study published in the journal Nature, the researchers show that after exposure to cannabis, behavioral changes related to sociability occur as a result of the activation of specific cannabinoid receptors, located in star-shaped cells of the central nervous system called astrocytes.

These findings are the result of almost a decade of hard work. In 2012, Marsicano and his team had made a surprising discovery: cannabinoid receptors are not only present on the cell membrane, as previously believed. Some of these receptors are also located on the membrane of the mitochondria, the intracellular organelles whose role is to provide the cells with the energy they need.

This new study comes after the team has identified cannabinoid receptors located on the membrane of the mitochondria within astrocytes. Among other functions, these cells play a very important role in energy metabolism of the brain. They capture glucose from the blood and metabolize it into lactate, which acts as “food” for neurons. “Given the importance of astrocytes and energy use for brain function, we wanted to understand the role of these specific cannabinoid receptors and the consequences for the brain and behavior when exposed to cannabis,” explains Marsicano.

Researchers then exposed mice to the cannabinoid THC, the main psychoactive compound in cannabis. They observed that persistent activation of mitochondrial cannabinoid receptors located in astrocytes resulted in a cascade of molecular processes leading to dysfunction of glucose metabolism in astrocytes.

As a result, the ability of astrocytes to transform glucose into “food” for neurons was reduced. In the absence of the necessary energy intake, the functioning of neurons was compromised in the animals, with a harmful impact on behavior. In particular, social interactions were decreased for up to 24 hours after exposure to THC.

“Our study is the first to show that the decline in sociability sometimes associated with cannabis use is the result of altered glucose metabolism in the brain. It also opens up new avenues of research to find therapeutic solutions to alleviate some of the behavioral problems resulting from exposure to cannabis. In addition, it reveals the direct impact of astrocyte energy metabolism on behavior,” says Marsicano.

At a time when the debate over therapeutic cannabis is returning to the forefront, the researchers also believe that this type of work is needed to better understand how the body’s various cannabinoid receptors interact with the drug, and whether any of them are particularly associated with harmful effects. Such research would make it possible to ensure the optimal management of patients who might need this type of therapy.