Developing iPS stem cells … from the hair of schizophrenic patients

Thanks to a simple human hair, INSERM researchers (headed by Daniel Aberdam, Inserm Unit 976 “Dermato-Oncology, immunology and stem cells”), in collaboration with an Israeli team from the Haifa Technion, have succeeded in developing an original iPS[1] stem cell model in order to gain a better understanding of schizophrenia. This “reversion” of human hair to its stem cell origin has made it possible to preserve a possible imprint of cell defects in schizophrenics and a reversion to their origins. When iPS cells are then reconverted into neurons, a very early defect emerges as the neurons and the pathways between them mature, especially those that are dopaminergic and thus associated with mitochondrial disturbance.

Schizophrenia is a multifactoral mental illness which, among other things, alters the functioning and interconnection of dopaminergic and glutaminergic neurons, as well as their mitochondrial activity. One of the predominant hypotheses suggests that the factors that trigger schizophrenia originate from a maternal disorder (stress, infection) in the first trimester of pregnancy, during the formation of the neuroectoderm, the embryonic tissue from which the brain and skin cells are derived.

To check these two hypotheses and develop a cell pattern capable of screening new medicational molecules, the researchers had the idea of converting cells from the hair of patients into induced pluripotent cells or iPSCs (i.e. immature cells capable of producing any type of cell in the organism in the culture), then differentiating them into neurons.

The hypothesis was that cells from the hair would have the same neuroectodermal origin as the neurons and thus, any possible defects acquired during the course of the development of the neuroectoderm would be preserved.

For this purpose, cells from the hair of three schizophrenic patients and two healthy patients were reprogrammed into induced pluripotent stem cells.

“Hair was chosen due to the ease of sampling and because the follicular keratinocytes share a common origin with neurons”, explains Daniel Aberdam.

This technique is far less traumatic than a skin biopsy performed under local anaesthetic and used routinely for the production of iPSC “Once we were in possession of these cells, we could study them and convert them into every cell type in order to understand what was not working and where it wasn’t working”. In view of the existing data, it was particularly interesting to see which neuron activity and their mitochondrial activity might malfunction.

Once these IPS cells had been obtained, researchers caused them either to become neurons specialising in the transmission of information via dopamine or via glutamate. According to their observations, the dopaminergic neurons exhibited a greatly reduced capacity to terminate their differentiation, while the glutaminergic cells were unable to reach maturity.

The researchers also showed that the dopamine sensitivity of mitochondria is disrupted in patients, causing an altered respiratory function in dopaminergic and glutaminergic neurons.

This data shows that the cell model, even if it does not mime the complexity of the brain, reproduces certain defects observed in patient samples and could be used for screening thereapeutic molecules in schizophrenia. 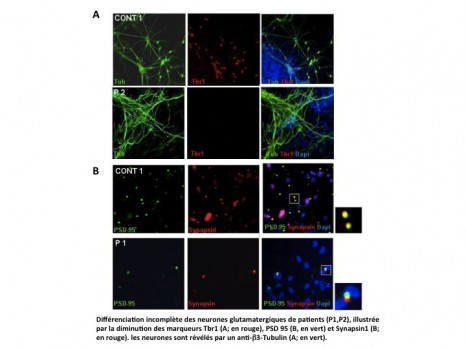 [1] Pluripotent induced cells (IPS) are obtained by transforning a specialist adult cell (in this case the cell from a hair) into an immature cell capable of producing any kind of cell in an organism.