Although excessive quantities of cholesterol in the body are known to have adverse effects on health, researchers might polish up its reputation via one of its derivatives. The research team from Inserm and the CNRS led by Marc Poirot and Sandrine Silvente-Poirot at the “Centre de recherche en cancérologie de Toulouse” (Inserm / CNRS / Université Toulouse III – Paul Sabatier), has not only discovered a new molecule derived from cholesterol (known as dendrogenine A), but has also provided proof in mice that this molecule has anti-cancer properties.

This work has been published in the journal Nature Communications.

Cholesterol is involved in different chronic pathologies, such as cardiovascular diseases and cancer. Current knowledge led us to suppose that cholesterol had a negative effect on cancers, mainly for two reasons. Firstly, cholesterol is a precursor of androgens and estrogens, both of which are involved in the development of cancers known as “hormone-dependent” cancers. Secondly, the synthesis process of cholesterol (that contains over 20 different stages) activates tumour-related genes.

Blocking the upstream biosynthesis pathway using inhibitors such as statins should have provided protection against cancer or some measure of anti-cancer efficiency, but this was not confirmed by clinical studies involving very large patient cohort studies; This suggests that its metabolism is much more complicated[1].

So the team of researchers led by Marc Poirot and Sandrine Silvente-Poirot concentrated particularly on the metabolism of cholesterol. Using screening and chemical synthesis techniques, the researchers were able to show that the product of the chemical reaction between a cholesterol derivative and a histamine generates a new class of sterols known as Dendrogenine A (DDA). This molecule, obtained in laboratory conditions, shows remarkable properties for inducing differentiation and death of cancer cells.

These observations led the team to search for this molecule in the tissues of mammals. And they discovered that DDA is present in healthy tissue and cells in humans, whereas it is not detectable in tumour cells. In women, its level is 5 times lower in breast tumour tissue than in normal tissue.

“Our results suggest that DDA protects the cells from carcinogenic processes” points out Marc Poirot.

In order to test this hypothesis, the researchers then attempted to repair the DDA deficiency in tumours implanted in animals. And in these animals, the administration of DDA controlled the proliferation of the tumour and extended the life expectancy.

For the researchers, this is a major discovery, because it provides the proof of the existence of a new metabolic pathway in humans, at the interface between the cholesterol metabolism and the histamine metabolism, and also because, thanks to its anti-cancer properties, DDA could be used to treat different cancers. 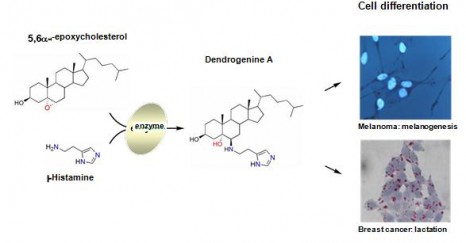 [1] A group of processes than involve both synthesis and breakdown of cholesterol into products that can be used by the body.

TO CITE THIS POST :
Press release – Inserm press room Discovery of a molecule derived from cholesterol that has anti-cancer properties Link : https://presse.inserm.fr/en/discovery-of-a-molecule-derived-from-cholesterol-that-has-anti-cancer-properties/8175/