Discovery of an innate immunological memory in the intestine 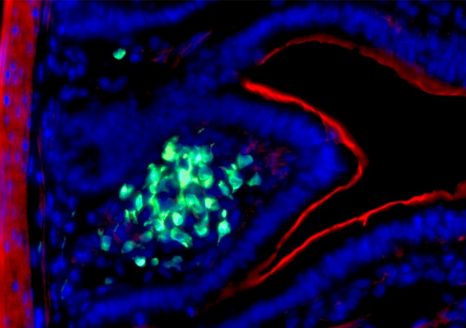 The innate immune system plays a crucial role in regulating host-microbe interactions, and especially in providing protection against pathogens that invade the mucosa. Using an intestinal infection model, scientists from the Institut Pasteur and Inserm discovered that innate effector cells – group 3 innate lymphoid cells – act not only during the early stages of infection but can also be trained to develop an innate form of immunological memory that can protect the host during reinfection. The study was published in the journal Science on February 25, 2022.

Combating Escherichia coli infections, which are responsible for intestinal diseases or gastrointestinal bleeding, is a major public health challenge. These bacteria, which are present in drinking water or food, can cause persistent diarrhea associated with acute intestinal inflammation. Consequently, enteropathogenic and enterohemorrhagic Escherichia coli are responsible for nearly 9% of child deaths worldwide.

The gut mucosa harbors a complex defense system that allows it to combat pathogen infection while maintaining tolerance to commensal microbiota, which are essential for the normal bodily function. This constant surveillance is performed by the innate immune system, which provides early defense in the initial hours after infection.

The adaptive immune system then develops a memory for the pathogens that it encounters by activating specific receptors expressed at the surface of B and T lymphocytes, thereby enabling the production of protective antibodies and inflammatory cytokines. Unlike the clearly established function of the adaptive system in long-term tolerance and protection, the role of the innate system in immune memory remains to be determined.

In 2008,[1] the team led by Inserm scientist James Di Santo (Innate Immunity Unit, Institut Pasteur/Inserm) described group 3 innate lymphoid cells (ILC3s) as a novel family of lymphocytes that were distinct from adaptive T and B lymphocytes. ILC3s play an essential role in the innate immune response, especially in the gut mucosa, by producing pro-inflammatory cytokines, such as interleukin (IL)-22.

The cytokine release activates the production of antimicrobial peptides by epithelial cells, thereby reducing the bacterial load in order to maintain the integrity of the intestinal barrier.

In this study, scientists from the Innate Immunity Unit (Institut Pasteur/Inserm) used an innovative protocol to expose the immune system to a time-restricted enterobacterial challenge based on Citrobacter rodentium (a mouse model of E. coli infection). They observed that ILC3s persist for several months in an activated state after exposure to C. rodentium.

During a second infection, the “trained” ILC3s have a superior capacity to control infection through an enhanced proliferation and massive production of IL-22.

“Our research demonstrates that intestinal ILC3s acquire a memory to strengthen gut mucosal defenses against repeated infections over time,” explains Nicolas Serafini, first author of the study and an Inserm scientist in the Innate Immunity Unit (Institut Pasteur/Inserm).

“The ability to “train” the innate immune system in the mucosa paves the way for improvements to the body’s defenses against a variety of pathogens that cause human diseases,” comments James Di Santo, last author of the study and Head of the Innate Immunity Unit (Institut Pasteur/Inserm).

This discovery demonstrates a new antibacterial immune defense mechanism and could lead, in the long term, to novel therapeutic approaches to treat intestinal diseases (IBD or cancer).

TO CITE THIS POST :
Press release – Inserm press room Discovery of an innate immunological memory in the intestine Link : https://presse.inserm.fr/en/discovery-of-an-innate-immunological-memory-in-the-intestine/44846/