Researchers from Inserm and Pierre and Marie Curie University (UPMC), in collaboration with the university hospitals of 6 French cities, have analysed data on pre- and postnatal exposure to tobacco in the homes of 5,200 primary school children. They show that this exposure is associated with a risk of behavioural disorders in children, particularly emotional and conduct disorders. The association is stronger when exposure takes place both during pregnancy and after birth. These data show the risk associated with smoking in early life and its behavioural repercussions when the child is of school-going age. These results are published in the journal Plos One. 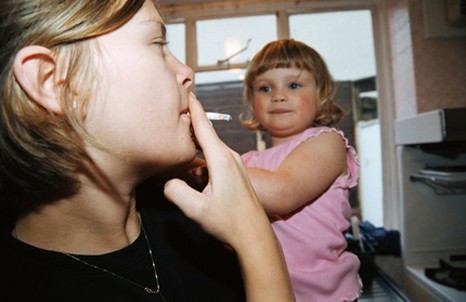 The consequences of tobacco exposure are widely documented. It leads to many illnesses, including asthma. However, the potential role of environmental tobacco smoke (ETS) is much less well known in terms of its link to behavioural problems in children. In this context, the team led by Isabella Annesi-Maesano, Inserm Research Director at Unit 1136, “Pierre Louis Public Health Institute” (Inserm/UPMC) examined the association between pre- and postnatal ETS exposure and behavioural problems in children.

“Exposure to ETS in the postnatal period, alone or in association with exposure during pregnancy, increases the risk of behavioural disorders in primary school children,” explains Isabella Annesi-Maesano, Inserm Research Director

These data come from the 6 Cities Study (see box), which targeted 5,221 primary school children. Prenatal (in utero smoking) and postnatal exposure to tobacco smoke in the home was assessed using a standardised questionnaire completed by the parents. Behavioural disorders were assessed via the Strengths and Difficulties Questionnaire (SDQ) used to assess the behavioural and psychosocial functioning of the children, which was also completed by the parents.

These observations seem to confirm those carried out in animals, i.e. that the nicotine contained in tobacco smoke may have a neurotoxic effect on the brain. During pregnancy, nicotine in tobacco smoke stimulates acetylcholine receptors, and causes structural changes in the brain. In the first months of life, exposure to tobacco smoke generates a protein imbalance that leads to altered neuronal growth.

“Our data indicate that passive smoking, in addition to the well-known effects on health, should also be avoided because of the behavioural disorders it may cause in children,” concludes the researcher.

Specific objectives of the study

The International Study of Asthma and Allergies in Childhood (ISAAC) is aimed at measuring the frequency and severity of asthma and allergic disease (phase I), determining the risk factors for these diseases (phase II), and studying their progression (phase III).

The French component was carried out in 6 large cities, chosen for their varying air quality (Reims, Créteil, Strasbourg, Clermont Ferrand, Bordeaux and Marseille).

The 6 Cities Study initially enrolled 9,615 children with a mean age of 10 years, distributed among 401 classes in 108 schools.

To analyse exposure to environmental tobacco smoke, 5,221 children were enrolled in this component of the study.

TO CITE THIS POST :
Press release – Inserm press room Early exposure to tobacco as a cause of behavioural problems in children Link : https://presse.inserm.fr/en/early-exposure-to-tobacco-as-a-cause-of-behavioural-problems-in-children/20728/