Epileptic seizure: a primitive brain activity with mechanisms that are conserved across species

Everything seems to distinguish a fly from a man. However, as remarkable as it may seem, Inserm researchers led by Christophe Bernard and Viktor Jirsa at the Institute of Systems Neuroscience (INS) – Inserm U1106 in Marseille have just shown that epileptic seizures follow simple mathematical rules that are conserved across species. The epileptic seizure is a form of neuronal activity that is encoded in every healthy brain, but expressed only in pathological situations. By identifying these basic principles, the researchers were able to precisely classify seizures into 16 distinct types, a classification which will be very useful to clinicians for planning increasingly personalised treatments and seeking new drugs. This research is published in the journal Brain. 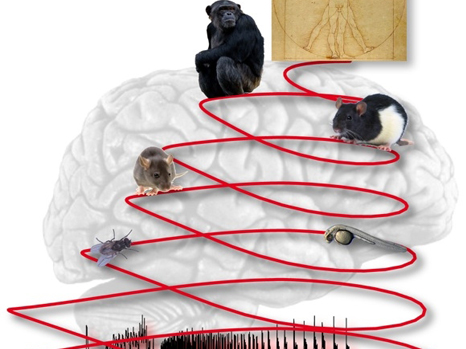 What is an epileptic seizure? For centuries this question has represented an enigma for patients and those close to them, as well as for researchers and physicians. Seizures often occur without any warning sign, with clinical manifestations that can be spectacular (examples?) For researchers and physicians, the seizure is considered a very difficult problem to solve, involving highly complex mechanisms.

A major breakthrough has just been made by two teams from the Institute of Systems Neuroscience (INS) – Inserm U1106 in Marseille. Combining theoretical neuroscience with basic and clinical research, the researchers have provided evidence that the principles governing the onset, middle and end of focal epileptic seizures (a very common form of epilepsy) are very simple and do not vary from one region of the brain to another or from one species to another, from fly to man.

The starting point is simple: any healthy brain can have a seizure, for instance after an electric shock, head trauma, etc., without being or without necessarily becoming epileptic. In other words, this brain activity which constitutes a seizure exists in a latent state in every one of us. The seizure is naturally encoded in our neurons. It is always possible, but in a “healthy” brain, the probability of occurrence is very small.

We will therefore use a metaphor to describe the main outcome. Let us represent the brain’s activity as a character travelling in a country made up of mountains, valleys, plains, beaches, etc. The different areas of the country represent as many activities in which the brain is involved (e.g. reading a book, riding a bicycle, etc.). In this country, there is one very particular place—a forbidden zone surrounded by a very high barrier. This forbidden zone is always there; it forms part of the landscape, but our character cannot enter it. This forbidden zone is the epileptic seizure. Extreme conditions are required in order to enter it—after an electric shock for example.

The researchers at the Institute of Systems Neuroscience have constructed a mathematical model that describes what happens from the time the barrier is crossed (onset of seizure) until the time the character finishes by leaving the forbidden zone (end of seizure) and returns to normal activity outside of it. They showed that the trajectories for entering and exiting the seizure follow simple and precise mathematical rules. They also showed that the seizure is the simplest—or most primitive—form of activity that the brain can generate.

“The mathematical model predicts the existence of 16 types of seizures, which enables a precise classification of seizures, a classification which will be highly useful to clinicians treating these seizures and seeking new treatments,” explains Christophe Bernard, a Research Director at Inserm.

The researchers then verified the predictions of the mathematical model experimentally, by analysing the seizures recorded for different species, including man (using an international database).


They were thus able to show that the rules for entry into and exit from the seizure were invariable, from fly to man. The same forbidden zone is therefore present in most regions of the brain across species.

Why is epilepsy so difficult to treat?

By using an experimental mouse model of epilepsy, the researchers have demonstrated that the forbidden zone can be entered at many locations. Furthermore, there are many ways of damaging the barrier. This multiplicity of opportunities explains why treatments must be tailored to every patient, because crossing the barrier does not necessarily take place at the same location from one individual to another.

This research is of major importance, not only because it contributes to demystifying epilepsy, but also because it supplies a conceptual framework for better understanding the mechanisms of seizures and proposing new solutions for treatment.

What is happening in patients who have seizures?
In patients, the barrier is damaged, and it is much easier to enter the forbidden zone. This destruction of the barrier is a very common phenomenon. It occurs naturally in the course of ageing, and this is why the frequency of epilepsy increases with age. Children are also very prone to epileptic seizures, because their barrier is not high enough. Many pathological conditions, such as autism, Alzheimer’s disease and Huntington’s disease, are associated with epileptic seizures, because the destructive effects generated in the brain by these pathologies ultimately erode the barrier.
For this reason, epilepsy may exist alone or in association with other pathologies. Pathological conditions and diseases only unmask an activity that potentially exists in every one of us.
TO CITE THIS POST :
Press release – Inserm press room Epileptic seizure: a primitive brain activity with mechanisms that are conserved across species Link : https://presse.inserm.fr/en/epileptic-seizure-a-primitive-brain-activity-with-mechanisms-that-are-conserved-across-species/12759/