Fatty acids, essential for the nervous system… of the gut (as well)

How does a fatty acid deficiency explain Crohn’s disease?

Two Inserm research teams have just shown that failure of the intestine to produce a lipid “messenger” is associated with Crohn’s disease, a common and highly disabling inflammatory bowel disease (IBD). This messenger, derived from an essential fatty acid, regulates the permeability of the intestinal barrier, and could thus become a choice target in the management of IBD. These studies also throw fresh light on the role of the enteric glial cells. Like their counterparts in the central nervous system, for too long considered to play a “secondary role,” the intestinal glial cells are starting to “show their hand,” which is actually indispensable to intestinal homeostasis. Details of this work are published in Gastroenterology.

The enteric nervous system plays a central role in controlling the homeostasis of the digestive functions, such as motor function, and in controlling the functions of the intestinal epithelial barrier. This integrative nervous system, located along the entire length of the digestive tract, is made up of neurons and glial cells. Much remains to be discovered about the role of the enteric glial cells. A growing number of studies shows that they regulate, in a manner analogous to the astrocytes in the brain, the functions of the enteric neurons, as well as those of the intestinal epithelial barrier, such as the proliferation of epithelial cells, their migration and permeability (paracellular and transcellular), and repair processes. Glial cells regulate these functions by liberating different glial mediators, including certain lipid metabolites of n-6 polyunsaturated fatty acids (PUFA).

Otherwise, characterisation of enteric glial cell (EGC) involvement in diseases associated with dysfunctions of the intestinal barrier remains limited to description of the altered expression of glial markers. These dysfunctions in the intestinal barrier (increased permeability, failure in repair) are recognised as playing a possible key role in inflammatory bowel disease (IBD) by helping to trigger recurrences. Reducing these dysfunctions is also a likely mechanism of action of the biotherapies used in the management of IBD.

In this context, Malvyne Rolli Derkinderen and Michel Neunlist, researchers in the Inserm/Nantes University Joint Research Unit “Neuropathies of Enteric Nervous System and Digestive Diseases: Involvement of Enteric Glial Cells,” and their collaborators at the Toulouse Purpan Digestive Health Research Institute (IRSD) initially sought to characterise the production of lipid mediators derived from n-6 fatty acids in animal and human enteric glial cells. They then analysed the impact of the most abundantly produced PUFA metabolites on the functions of the intestinal epithelial barrier, and ultimately demonstrated that production of one of them was defective in patients with Crohn’s disease. 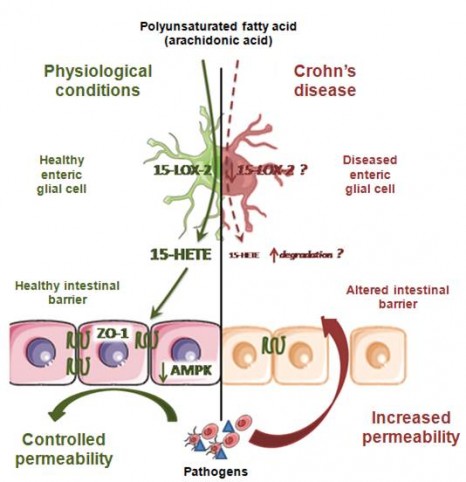 In green: under physiological conditions, the enteric glial cells produce lipid metabolites including 15-HETE, which strengthens the resistance of the intestinal epithelial barrier, and prevents entry of pathogens. In red: during Crohn’s disease, there is a deficiency in glial production of 15-HETE, which leads to an increase in the permeability of the barrier, and facilitates the entry of pathogens. This may contribute to disease recurrence or severity.

Thus the researchers showed that human (as well as rat) EGC are able to produce n-6 PUFA, especially 15-HETE, synthesised by 15-lipoxygenase-2. This 15-HETE strengthens the intestinal epithelial barrier, and reduces paracellular permeability in vivo and in vitro, particularly by increasing the expression of tight-junction molecules including zonula occludens-1. In EGC isolated from patients with Crohn’s disease, the researchers demonstrated defective production of 15-HETE, associated with a loss of ability of the EGC to control the permeability of the intestinal epithelial barrier.

This work therefore identifies n-6 PUFA as a source of metabolites with potentially beneficial effects on the functions of the intestinal epithelial barrier in IBD. For Camille Pochard and Sabrina Coquelorge, the two first authors,

“These results help to underscore the role of the glial cells in particular, and of the enteric nervous system in general, in the physiopathological processes involved in IBD, and to identify new targets of therapeutic interest.”
TO CITE THIS POST :
Press release – Inserm press room Fatty acids, essential for the nervous system… of the gut (as well) Link : https://presse.inserm.fr/en/fatty-acids-essential-for-the-nervous-system-of-the-gut-as-well/21248/