Odorology is a technique that uses specially-trained dogs to identify human scent. It is used in police investigations to establish that an individual has been at the scene of a crime. However, there is no international norm on how these dogs are trained. At the Centre de recherche en neurosciences de Lyon (CNRS/Université Claude Bernard Lyon 1/Inserm), researchers specializing in scents and their memorization have analyzed data, provided since 2003 by the Division of the Technical and Scientific Police (DTSP, Ecully) on dog performances in scent identification tasks. Their results show that, at the end of a 24-month training program, the dogs are able to recognize the smell of an individual in 80-90% of cases and never mistake it for that of another. These findings validate the procedures that are currently in use and should convince the international community of the reliability of this method. This work was published on 10 February 2016 in the journal PLOS ONE. 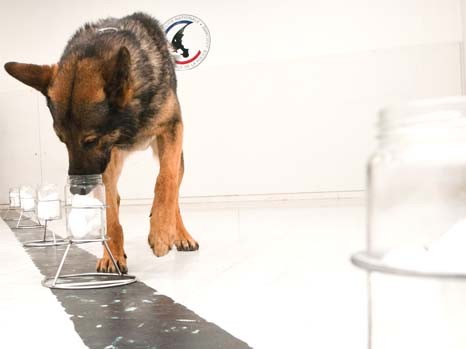 Odorology, or the science of smells, is a method of identifying human scents. It has been used in France since 2003 in police investigations to establish that an individual has been present at a crime scene. The method is based on the fact that each person has their own scent and relies on the powerful canine sense of smell (which can be 200 to 10,000 times more sensitive than that of a human being[1]). It involves a long period of dog training.

This technique consists in using a specially-trained dog to compare a human scent collected from an object found at a crime scene with scents from several people, including that of a suspect or victim. As the results of these tests are of critical importance for investigators, they need to be obtained through viable and reproducible methods. However, there are no internationally recognized norms for the training of these dogs or for their inclusion in investigations—hence the occasional reluctance to treat their evidence as proof. By analyzing results collected since 2003 at the Division of the Technical and Scientific Police (DTSP, Ecully), researchers from the Centre de recherche en neurosciences de Lyon have succeeded in demonstrating the viability of the technique used.

During basic training, the German and Belgian shepherd police dogs must learn to make the link between two scents from the same individual through the completion of increasingly complex tasks. By the end of this training, the dogs are able to carry out identification exercises during which they sniff a reference human scent and then compare it with five different human odors, one of which is the reference scent. When a dog matches the scent in the jar to the reference one (which it shows by lying down in front of the correct jar) it is rewarded with a treat or a game. The human odors may consist of traces collected from an object that someone has touched or of a scent collected directly from a person.

The analysis of the data obtained with the 13 DTSP dogs since 2003 shows that after they have learned the task’s principles, 24 months of regular training is necessary for stable and optimal performances. At the end of the first twelve months, the dogs no longer made any recognition errors, i.e., they did not confuse the scent of one person with that of another. Furthermore, their olfactory sensitivity increased significantly over the training period: on average, after two years, the dogs managed to recognize two scents from the same person in 85% of cases. The remaining 15% of cases in which no match was obtained, were mostly the result of poor scent sampling rather than poor recognition.

The researchers also found that German shepherds were better than Belgian shepherds, undoubtedly because they are more disciplined and attentive.

At the end of their basic training, the dogs are able to participate in criminal cases and receive continuing training throughout their lives. In practice, each identification test is carried out by at least two dogs. Additionally, each dog performs at least two tests with the same panel of scents: the collected scent is presented either as a sample to be sniffed at the start of the task, or in one of the jars that the dog sniffs successively. Between 2003 and 2016, odorology was used in 522 cases at the SDPTS and helped to resolve 162 cases.

In these criminal cases, the sampled scents were only a few hours or days old. The researchers now want to study how the dogs perform on older scents. Scent samples can in fact be stored in scent libraries over several years.