Beta-thalassaemia and sickle cell anaemia are genetic disorders caused by mutations in a single gene but non-coding genomic regions seem to have a strong influence on disease severity. The teams of Eric Soler, researcher at Inserm unit 967, Fontenay-aux-Roses, France (Inserm / CEA), Swee Lay Thein, Clinical Director of the Red Cell Centre in King’s college London and King’s College Hospital, London, UK, and Frank Grosveld, professor of Cell Biology at the Erasmus Medical center, Rotterdam, unraveled the molecular mechanisms explaining how non-coding genomic variants, located far away from genes, were able to modify the clinical severity of beta thalassaemia and sickle cell anaemia. To reach this goal, the researchers have combined different expertise, including the study of spatial chromosome architecture. This work will be published in The Journal of Clinical Investigation and will be accessible online starting from March 10th 2014.

It is now clear that the vast majority of mutations and genetic variations uncovered by Genome-Wide Association Studies (GWAS), associated with common and rare diseases (diabetes, cardiovascular diseases, cancers) lie within non-coding sequences in the genome, i.e. do not directly hit the structural part of genes. Surprisingly, these genomic variants, found in the human population may be located at considerable distances from genes. This fact strongly complicates their functional analysis, and illustrates the complexity of the human genome organization and its relationship with diseases. 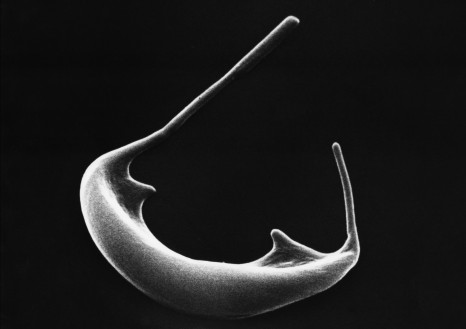 The researchers used a combination of chromosome conformation technologies and high throughput DNA analyses on thalassemia patient samples to elucidate the molecular mechanisms of how non-coding variants exert their action and improve the symptoms of thalassaemia and sickle cell anaemia.

” The decrease of MYB expression in patients carrying the variants leads to a reactivation of fœtal haemoglobin which compensates for the defect of adult haemoglobin and significantly ameliorates sickle cell and beta thalassaemia severity “, the authors say.

These data identify directly and for the first time the MYB gene as the target of chromosome 6q23 non-coding variants. Thus, the MYB gene represents a major therapeutic target for the induction of fœtal haemoglobin, a potential therapeutic approach for beta thalassaemia and sickle cell anaemia, Eric Soler and Swee Lay Thein suggest.