Neisseria meningitidis, also called meningococcus, is a bacterium responsible for meningitis and septicemia[1]. Its most serious form, purpura fulminans, is often fatal. This bacterium, which is naturally present in humans in the nasopharynx, is pathogenic if it reaches the blood stream. Teams led by Dr. Sandrine Bourdoulous, CNRS senior researcher at the Institut Cochin (CNRS/Inserm/Université Paris Descartes), and Professor Xavier Nassif, Institut Necker Enfants Malades (CNRS/INSERM/Université Paris Descartes/Assistance Publique – Hôpitaux de Paris), have deciphered the molecular events through which meningococci target blood vessels and colonize them. This work opens a path to new therapeutic perspectives for treating vascular problems caused by this type of invasive infection. The study was published on June 1, 2014 in Nature Medicine. 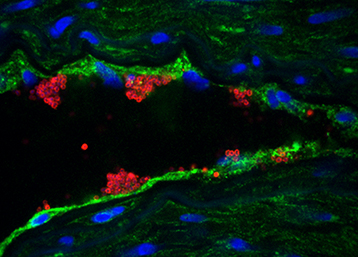 When the bacterium Neisseria meningitidis multiplies in the blood, it interacts with the endothelial cells that line the inside of blood vessels and adheres to their walls. In the skin and mucous membranes, meningococcal infection in the vessels creates hemorrhagic skin lesions (called purpura) due to bleeding in the tissues. Those can rapidly progress to a serious and often fatal form of the disease (purpura fulminans). In the brain, when meningococci adhere to the vessels they can pass through the blood-brain barrier[2], and cause meningitis when they invade the meninges[3].

Teams of researchers have deciphered how Neisseria meningitidis adheres to blood vessels, a step that underpins the bacterium’s pathogenicity. In blood vessels they have identified receptor[4] CD147, whose expression is essential for initial meningococcal adherence to endothelial cells. If this receptor is absent, N. meningitidis cannot implant in blood vessels and colonize them.

It is a well-known fact that the adherence process of meningococcal bacteria to human cells relies on pili, long filaments that are expressed by the bacterium and composed of different sub-units (pilins). However, the pilins specifically involved in N. meningitidis’ adherence to blood vessels had never been identified. The researchers have determined that two pilins, PilE and PilV, interact directly with the CD147 receptor. Without them, meningococci cannot adhere to endothelial cells.

The researchers also showed in an ex vivo[5] infection model that cerebral vessels and meninges, particularly rich in CD147 receptors, allow colonization by meningococci, unlike other parts of the brain.

The scientists now wish to develop a new type of vaccine (to complement those already available) that would block the interaction between N. meningitidis and the CD147 receptors, thereby stopping the bacterium from colonizing the vessels.

[2] The endothelial cells in the brain’s capillaries are a physiological barrier at the interface between the blood and the brain (the blood-brain barrier). These cells, which have unique properties, act as a selective filter through which the necessary energy sources are transmitted to the brain and the waste is removed. Therefore they protect the brain from the external environment, including pathogens.

[4] A receptor is a protein in the cell membrane onto which a specific factor (a ligand) can bind, triggering a response in the cell.

[5] This expression refers to culture tissues and live cells made in the laboratory, outside the organism they came from.