Each year, obesity kills 2.8 million people worldwide. When confronting morbid overweight—and its direct consequence, type 2 diabetes—surgery is used as a last resort. Strangely, in patients who have had such an operation, the diabetes disappears before and independently of weight loss. Inserm researchers, with the help of physicians from Bichat Hospital, AP-HP, have shown that the surgically reconfigured intestine might be at the root of this improved glycaemic control. This study is published in Gastroenterology.

Overweight, even to a mild degree, is never harmless. As a cause of cardiovascular disease, joint and muscle problems and the development of type 2 diabetes, it can lead to premature death.

When a person is so overweight that his/her health is under threat, there is sometimes only one solution, i.e. bariatric surgery to reduce the patient’s appetite. The most frequently offered procedures are sleeve gastrectomy and gastric bypass. Both of these solutions involve removal of most of the stomach. In sleeve gastrectomy, the stomach is reshaped so that it forms just a tube. In gastric bypass, the food pathway is modified: the surgeon directly connects a small pouch from the top of the stomach to the intestine, forming a “roux limb.” The rest of the stomach, through which food no longer passes, continues to supply the enzymes needed for digestion. These enter the food pathway further down the alimentary tract, at the Y intersection.

Curiously, although patients lose weight rapidly in the months following the operation, physicians have noticed a clear improvement in their type 2 diabetes, practically as soon as they leave hospital. How can this phenomenon be explained? For the researchers at Inserm, the answer is clear: surgery not only affects food intake, but also modifies intestinal metabolism.

In order to confirm their hypothesis, the scientists reproduced both techniques in an obese rat model.

Following bypass, the Roux limb became strikingly enlarged in the rodents, as the cells constituting it proliferated abnormally. Moreover, these cells expressed a type of glucose transporter on their surface that is unusual for the intestine. These observations were also found in patients following surgery at Bichat Hospital.

People with type 2 diabetes secrete insulin, but their organs no longer respond to it. The level of the sugar in the bloodstream is no longer controlled, and remains abnormally high after every meal, resulting in damage to the tissues.

“We labelled glucose in order to follow its metabolic fate. Following surgery, the patient’s newly reconfigured intestine, like that of the rat, begins to consume very large quantities of glucose,” explains Maude Le Gall, Inserm Research Fellow. It diverts dietary and blood glucose for its own consumption. This phenomenon, which develops after barely a few days, might contribute to the rapid improvement in glycaemia and the disappearance of diabetes.”

Gastrectomy, a different mechanism with a similar result

Although gastrectomy does not affect the size of the intestine, it also acts on its cellular function. Absorption of dietary glucose by the intestinal cells becomes reduced. Conversely, the number of cells secreting GLP-1 peptide, which is usually inadequately produced in obese people, increases considerably. GLP-1 acts on the pancreas to increase its production of insulin. As a result, control of glycaemia in response to nutrient intake is more rapid.

“These results prove that sleeve gastrectomy and gastric bypass, while they have very similar effects on diabetes, do not involve the same mechanisms,” adds Maude Le Gall. “At the same time, they indicate the major role played by the intestine in controlling glycaemia.”

Although more studies are needed to understand these processes, this discovery indicates that there is hope of finding new options for treating type 2 diabetes without recourse to surgery. 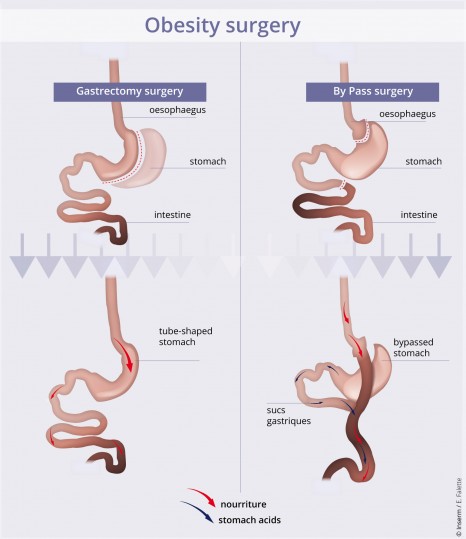