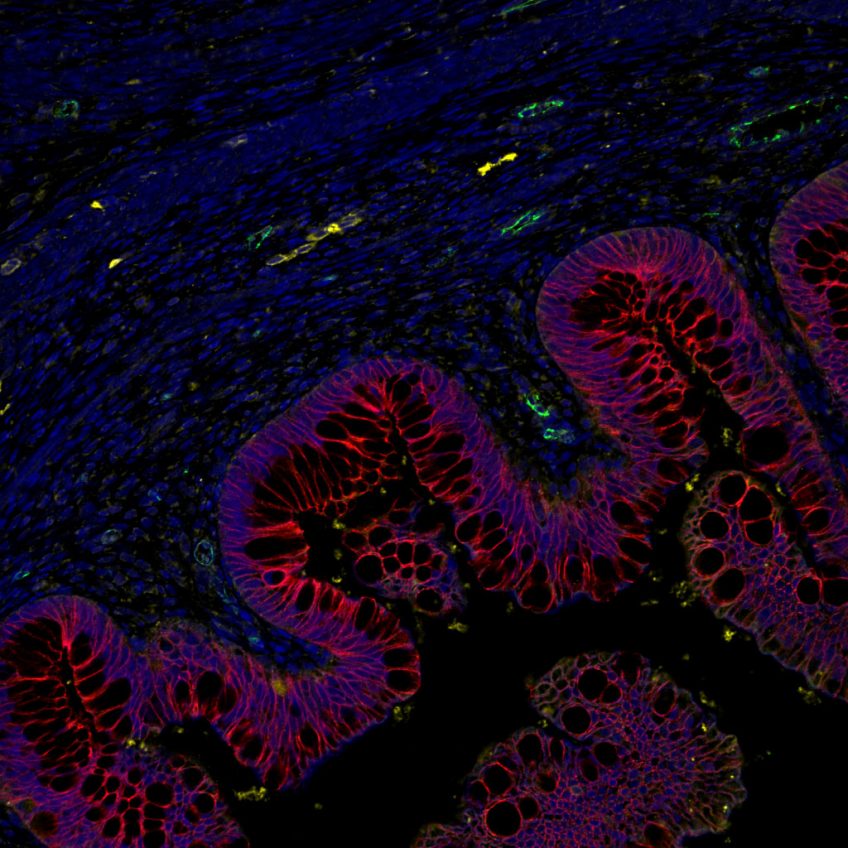 Cross-section of human intestinal organoid with enteric nervous system after transplantation in mice.*

The gut is an essential organ of the human body. It is the main interface for exchanges with the external environment and has a surface area equivalent to two tennis courts. Given its importance, the gut has its own nervous system and has been commonly known as “the second brain”. The enteric nervous system controls many functions, which include mixing and propelling food along the digestive tract, hormone secretion and epithelial permeability. Disruptions of this system are the cause of many diseases. Poor gut function can actually affect intestinal muscle contraction. This plays a role in triggering abdominal pain, diarrhoea, constipation and, in serious cases, leads to functional obstruction (intestinal occlusion) that requires surgery.

Researchers have developed an innovative approach to engineering tissue involving the use of stem cells to create a functional human intestine that can be used to study intestinal diseases.

To do this, the scientists successively added a cocktail of molecules designed to promote the differentiation of human pluripotent stem cells into intestinal tissue. The process was virtually the same used in 2010 and 2014 by the same laboratory that succeeded in developing the first generation of human intestinal tissue. However, the intestinal tissue did not possess an enteric nervous system through this approach alone, which is essential for absorbing nutrients and eliminating waste through the digestive tract.

At the same time and in order to develop a functional nervous system, researchers created embryonic nerve cells known as neural crest cells. These cells were manipulated to form cells that are enteric neural cell precursors. “The difficulty with this step was to identify how and when to incorporate the neural crest cells into the developing gut that was previously created in vitro”, explains Maxime Mahé, first co-author of this work and recently recruited as a junior research associate by Inserm.

The co-culture of intestinal tissue and enteric neural cell precursors resulted in human tissue that resembled a developing fetal intestine. This led to the first generation of complex and functional “mini-intestines” (known as intestinal organoids) created entirely from human pluripotent stem cells.

The next challenge was to transplant these functional organoids into a living organism, in this instance, lab mice that lacked an immune system. This step allowed scientists to observe tissue development and function in vivo. Data from this study show that the tissues function and are structured in a way that is remarkably similar to the human intestine. They develop and ensure intestinal functions, such as the treatment of nutrients. Finally, these tissues exhibit motor functions similar to peristalsis, i.e. the series of muscle contractions that move food through the digestive tract.

Researchers then used this technology to study a rare bowel disease — Hirschsprung Disease — a disorder where the rectum and colon do not develop a nervous system, which leads to constipation and intestinal occlusion. A lethal form of Hirschsprung disease is caused by a mutation of the PHOX2B gene. In vitro tests in mice have made it possible for researchers to show that the mutated PHOX2B gene causes significant deleterious changes in the innervated intestinal tissues.

“Our work marks an essential step in understanding human digestive diseases where few models exist. This new technology offers a screening platform for new intestinal treatments. This technology is still in its infancy. However, an approach towards regenerative and personalised medicine is possible, particularly with regards to patient-specific intestinal transplantation”, explains Maxime Mahé.

In this image we can see the intestinal epithelium in red (E-cadherin) with lumen opening. The tissue underlying the epithelium is rich in blood vessels (green, CD31) and has neurons (yellow, TUBB3) that are also derived from human pluripotent stem cells. The observed tissue is incredibly similar to normal human tissue.