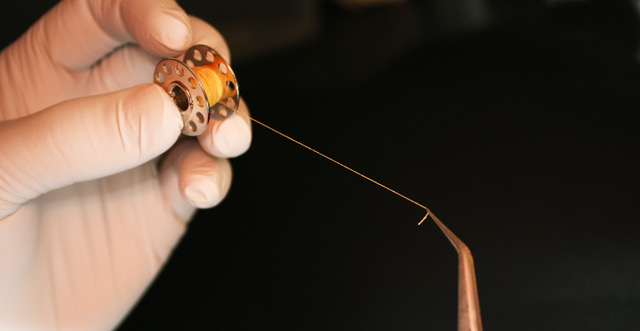 The researchers use extracellular matrix sheets to make yarn – a bit like that used to make clothing fabric. ©Nicolas L’Heureux

The leading cause of mortality worldwide, cardiovascular diseases claim over 17 million lives each year, according to World Health Organization estimates. To open up new research avenues into this serious public health problem, Inserm researcher Nicolas L’Heureux and his team at the Tissue Bioengineering unit (Inserm/Université de Bordeaux) are developing “human textiles” from collagen in order to repair damaged blood vessels. An innovation described in the journal Acta Biomaterialia, which still has to pass through several stages before it can be tested in humans.

What if we could replace a patient’s damaged blood vessels with brand new ones produced in a laboratory? This is the challenge set by Inserm researcher Nicolas L’Heureux, who is working on the human extracellular matrix – the structural support of human tissues that is found around practically all of the body’s cells.

In a study published in Acta Biomaterialia, L’Heureux and his colleagues at the Tissue Bioengineering unit (Inserm/Université de Bordeaux) describe how they have cultivated human cells in the laboratory to obtain extracellular matrix deposits high in collagen – a structural protein that constitutes the mechanical scaffold of the human extracellular matrix. “We have obtained thin but highly robust extracellular matrix sheets that can be used as a construction material to replace blood vessels”, explains L’Heureux. 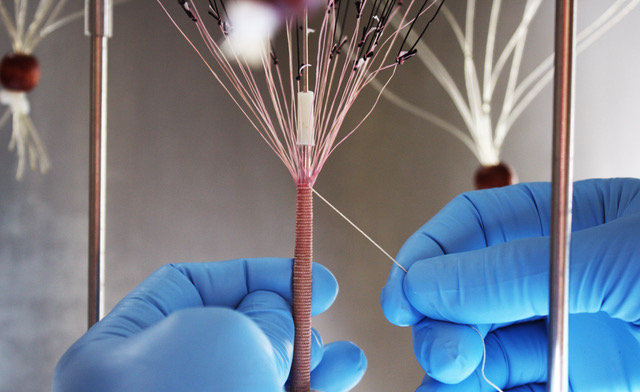 Made entirely from biological material, these blood vessels would have the advantage of being well tolerated by all patients.© Nicolas L’Heureux

The researchers then cut these sheets to form yarn – a bit like that used to make fabric for clothing. “The resulting yarn can be woven, knitted or braided into various forms. Our main objective is to use this yarn to make assemblies which can replace the damaged blood vessels”, adds L’Heureux.

Made entirely from biological material, these blood vessels would also have the advantage of being well-tolerated by all patients. Given that collagen does not vary from individual to individual, it is not expected that the body will consider these vessels as foreign bodies to be rejected.

The researchers would now like to refine their techniques used to produce these “human textiles” before moving on to animal testing, in order to validate this last hypothesis. If these are conclusive, this could lead to clinical trials.