Scientists from the CNRS, INSERM and Université de Limoges, working in the Laboratoire Contrôle de la Réponse Immune B et Lymphoproliférations (CNRS/Université de Limoges)[1] have demonstrated that the production of type E immunoglobulins (IgE)[2]by B lymphocytes induces a loss in their mobility and the initiation of cell death mechanisms. These antibodies, present in small quantities, are the most powerful “weapons” in the immune system and can trigger extremely violent immune reactions or immediate allergies (asthma, urticaria, allergic shock) as soon as their levels rise, even slightly. These findings, published online in Cell reports on 12 February 2015, thus elucidate how our bodies restrict the production of IgE in order to prevent an allergic reaction.

B lymphocytes under a confocal microscope (x1000). The cytoskeleton (actin molecules is labeled with a green fluorescent probe (phalloidin FITC). B lymphocytes with an IgM on their surface display protuberances (pseudopods) which testify to their mobility, while IgE+ B lymphocytes lose theses structures and become immobile.

Immunity is based on cells, B lymphocytes, which carry or secrete antibacterial or antiviral “weapons”, the immunoglobulins (IgG, IgM, IgA, IgE) or antibodies. Although these weapons of immunity offer protection, they can also sometimes turn on us. This is the case for the most effective of antibodies, IgE, where even infinitesimal traces (these IgE are 100,000 times less abundant than other antibodies) can trigger extremely violent allergic reactions.

The lymphocytes that produce IgM, IgG or IgA are numerous, easily identifiable and persistent (as “memory cells”). For hitherto unexplained reasons, the cells that produce IgE are rare and have thus been the subject of very little study. In order to understand the mechanisms controlling IgE, the scientists first of all used genetic engineering to force cells to produce these antibodies in large numbers. They then succeeded in demonstrating two principal control mechanisms. They showed that as soon as a B lymphocyte carries an IgE on its membrane, it “freezes”, swells, loses its pseudopods[3] and becomes incapable of moving, although lymphocytes are generally highly mobile. The scientists also revealed that the lymphocyte activates several mechanisms leading to apoptosis, or programed cell death. This self-destruction causes the rapid elimination of lymphocytes carrying IgE, while other cells in the immune system are able to survive for up to several years.

During evolution, our bodies have thus developed several self-restriction mechanisms around one of their most powerful immune “weapons”, IgE. Because a cell carrying IgE can no longer move, it can only survive for a brief period — just long enough to play a short-lived protective role against parasites, toxins and poisons. It then self-destructs by committing a sort of “hara-kiri” which strongly reduces IgE production and hence the triggering of allergies. The scientists now wish to explore in more detail the different molecular pathways governing this self-restriction. Indeed, these may constitute numerous new therapeutic targets whose pharmacological activation could block allergies, or even permit the reduction of other pathological B lymphocytes, such as those involved in lymphomas. 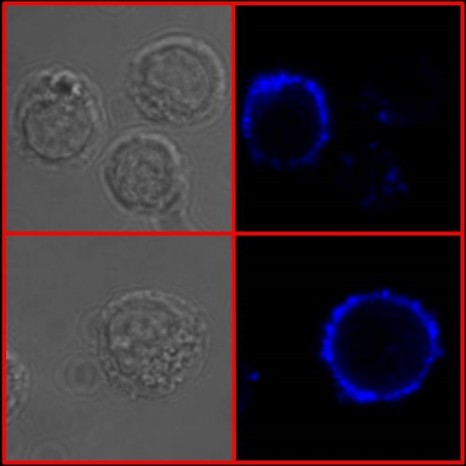 [1] In collaboration with an immunologist from the Laboratoire Microenvironnement et Cancer (INSERM/Université de Rennes 1).
[2] Immunoglobulins, or antibodies, are proteins secreted by type B lymphocytes in reaction to introduction into an organism of a foreign substance (antigen).
[3]  Deformations of the membrane that allow a cell to eat and “crawl”.
TO CITE THIS POST :
Press release – Inserm press room Immune cells commit suicide to prevent allergy Link : https://presse.inserm.fr/en/immune-cells-commit-suicide-to-prevent-allergy/17826/

It is world’s third most common tropical mycobacterial disease after tuberculosis and leprosy. Caused by Mycobacterium ulcerans, it leads to the destruction of skin tissue and the development of large ulcers which can affect entire limbs right down to the bone. ...