Against the current background of global warming, the relationship between the temperature and mortality is taking on a totally new significance. Are we getting used to rising temperatures over the years? This is the question that researchers in the Inserm Unit 1169 team ‘Epigenetics and Environment’ (Inserm/CEA/Paris-South University) are trying to answer. By analysing the link between the mortality of the elderly and daily temperature in France over 42 years, the scientists are providing evidence of our ability to adapt to temperature changes over time. This work is published in Environmental Health Perspectives.During recent decades, the rise in temperatures has already been observed in France. Furthermore, climatic model forecast that this warming will continue in future years. This observation raises the question of our ability to acclimatise to these changes.

When we plot the change in mortality against temperature on a given day, the graph obtained is generally a parabola (‘U’-shaped). The lowest point of this curve is reached for a given value: the minimum mortality temperature (MMT), or the temperature at which the death rate is lowest. Nicolas Todd and Alain-Jacques Valleron based their analysis on these observations and on the examination of 16,000,000 death certificates[1] dated between 1968 and 2009. 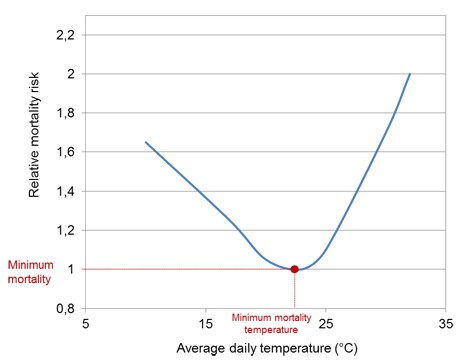 “This study of the link between temperature and mortality covers not only the longest period (42 years) but also the largest number of deaths ever studied on the subject”, emphasises Alain-Jacques Valleron, Emeritus Professor at the Pierre & Marie Curie University, and a member of the French Academy of Sciences.

“Although the mechanisms that explain this adaptation are not the purpose of this study, they are probably linked more to improvements in the insulation of homes, air-conditioning and preventive messages broadcast during heat waves than to physiological adaptation”, explains the researcher, also formerly the director of two Inserm units.

[1] Collected by Inserm’s CépiDc (epidemiological centre for medical causes of death) with authorisation from the French Commission for Data Protection (CNIL)
TO CITE THIS POST :
Inserm press room In 40 years the French have adapted their behaviour to climate change Link : https://presse.inserm.fr/en/in-40-years-the-french-have-adapted-their-behaviour-to-climate-change/18713/