Several years ago, INRA researchers in Jouy-en-Josas showed that levels of the gut bacterium Faecalibacterium prausnitzii tended to decline in the human gut at the onset of chronic inflammatory bowel disease (IBD). Is this disappearance of F. prausnitzii one of the causes of inflammation, or is its disappearance a consequence of the disease? Today, the same INRA team, in collaboration with an American team (Berkeley), AgroParisTech, lnserm, AP-HP and UPMC, are answering these questions. Not only do their results show that F. prausnitzii plays an active role in protecting against intestinal inflammation, they also propose explanations regarding mechanisms of action. This research is published in the journal mBio on 21 April 2015.

Seven years ago, researchers at INRA (French National Institute for Agricultural Research) drew the attention of scientists and the public to a specific bacterium found in our gut. This bacterium, Faecalibacterium prausnitzii, is abundant in the gut of healthy humans, but as soon as a chronic inflammatory bowel disease (IBD) occurs, it tends to decline. One nagging question has been raised by the scientific community: is the disappearance of F. prausnitzii one of the causes of inflammation, or is its disappearance a consequence of the disease? In other words, is F. prausnitzii a bacterium that might protect our digestive tract from an inflammatory disease?

To find an answer, the researchers used mice harbouring only two types of bacteria in their digestive tract, in contrast to several billion under normal circumstances. Following a treatment that generates inflammation, the presence of F. prausnitzii on its own protects from the development of intestinal inflammation. This demonstrates the anti-inflammatory potential of F. prausnitzii.

The INRA researchers and their colleagues from Berkeley, in collaboration with AgroParisTech, the French National Institute of Health and Medical Research (Inserm), the Paris public hospitals (AP-HP), and Pierre and Marie Curie University (UPMC), also propose new approaches to explaining how this bacterium could protect us. The presence of this bacterium is actually associated with many anti-inflammatory molecules in the gut and bloodstream of animals. F. prausnitzii may be able to provide protection to our digestive tract by a varied arsenal of metabolic activities. For example, salicylic acid, a precursor in the synthesis of drugs used to treat patients with IBD, is found in the gut of mice carrying F. prausnitzii. The bacteria that we harbour may well play an active role in our health via the same strategies that are used in the medical arena.

[exergue]Once there is intestinal inflammation, the decline in the presence of the bacterium F. prausnitzii therefore aggravates the disease. In order to break this vicious cycle leading to chronic inflammation of the digestive tract, the scientists plan to restore the presence of F. prausnitzii using new food supplements containing the bacterium (probiotics) and/or favouring development of the bacterium (prebiotics). [/exergue]This study, which has added to our fundamental knowledge in the area of microbiology, is also at the interface of new industrial and medical applications. 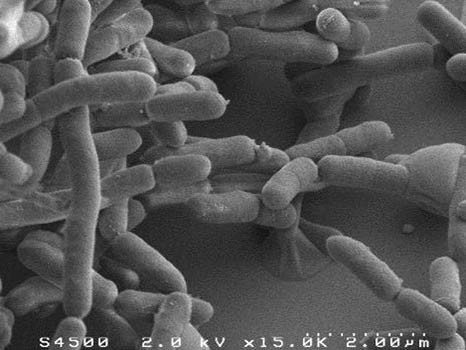