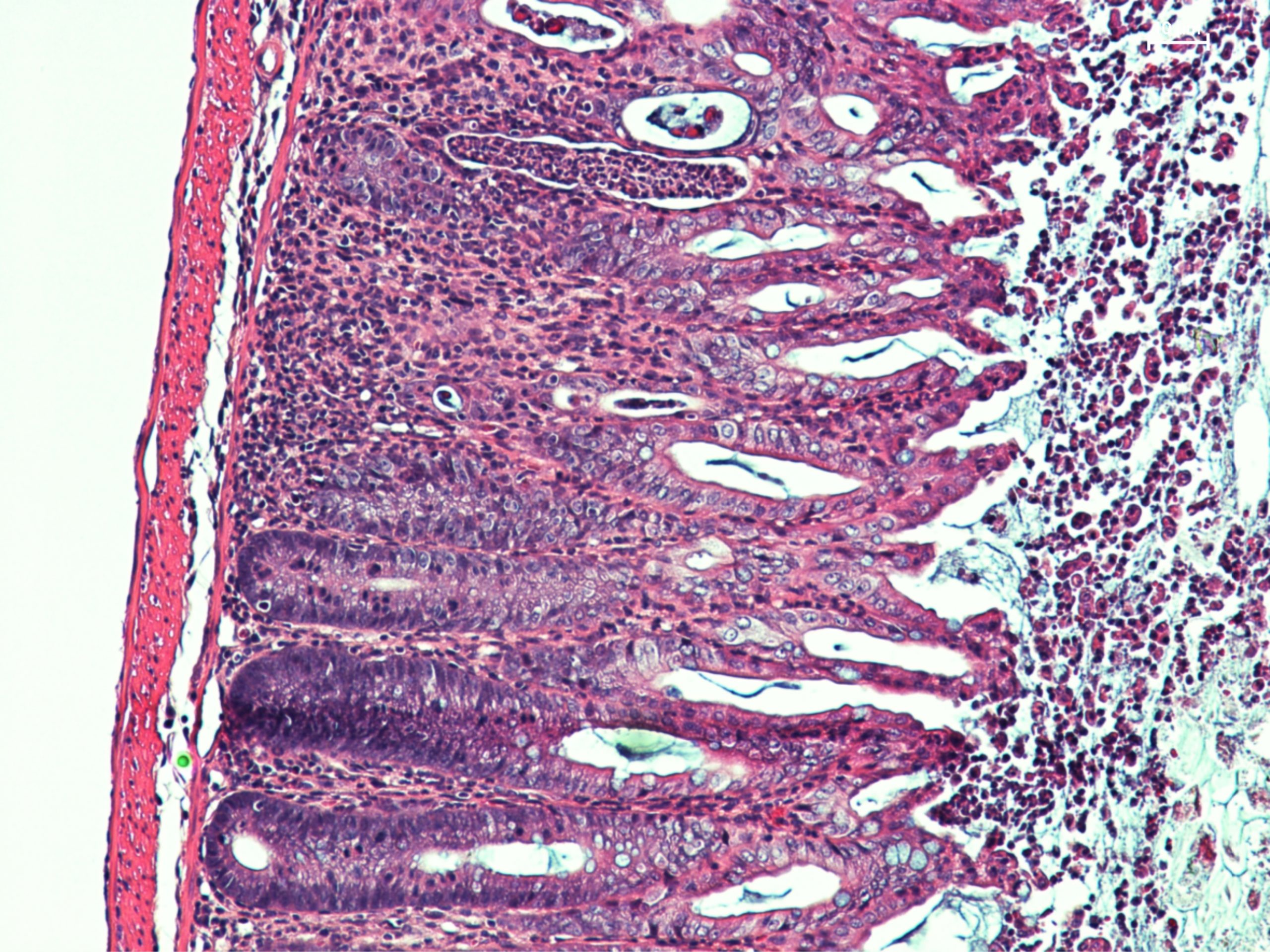 This microscopic image of a section of mouse intestine shows significant lesions, inflammatory signs and dysfunctional healing of the intestinal mucosa. © Sonnenberg Lab

Inflammations of the intestine affect many patients, often with reduced therapeutic prospects. The role of iron in these inflammatory processes is increasingly well documented, opening up new avenues of treatment. A collaborative study between the team led by Inserm research director Carole Peyssonnaux at Institut Cochin (Inserm/CNRS/Université de Paris) and Greg Sonnenberg’s team in New York (Weill Cornell Medicine) shows that the hormone that regulates iron levels in the body is produced by immune cells during inflammation of the intestine, and that it helps repair damage to the intestinal mucosa. This research has been published in Science.

Infections, inflammatory bowel disease (IBD) such as Crohn’s disease, and colorectal cancer are associated with inflammation of the intestine. In patients, the intestinal mucosa may then be damaged, with bleeding and impaired distribution of iron in the body often being observed.

For several years, Inserm research director Carole Peyssonnaux and her team at Institut Cochin (Inserm/CNRS/Université de Paris) have been interested in the role of hepcidin in disease settings. This hormone regulates iron metabolism in the body and is mainly produced by the liver. However, the researchers had already shown that in the case of certain pathologies, hepcidin is also secreted in other tissues.

Their new study, carried out in collaboration with Gregory F. Sonnenberg’s team from Cornell University in the United States and published in April 2020 in the journal Science, shows that in a context of intestinal inflammation, hepcidin is also expressed by specific immune cells, the dendritic cells of the intestine.

The researchers have confirmed that hepcidin plays an important role in the healing of intestinal lesions. However, they still wondered whether it was the hepcidin normally secreted by the liver that had this beneficial effect or whether, in this disease setting, this iron-regulating hormone was produced in other organs.

Using mouse models in which the gene coding for hepcidin was only deficient in the liver, the researchers were able to show, surprisingly, that the healing process was independent of hepatic hepcidin production. Following intestinal injury and in a context of inflammation, the local dendritic cells of the intestine were the dominant source of production of this hormone.

The research also emphasizes that hepcidin interacts with a key iron transporter called ferroportin, which is present on other immune cells in the intestine (macrophages), thereby promoting iron sequestration and preventing the proliferation of iron-dependent bacteria in intestinal lesions. This process helps to limit the severity of the inflammation.

To determine whether this phenomenon also occurs in humans, the researchers looked at samples taken from pediatric IBD patients. They confirmed that the dendritic cells in the human intestine also produce hepcidin in response to injury. This pathway may therefore be clinically important for people with IBD. “Our study suggests that hepcidin may have a protective role because if the gene that codes for this hormone is deleted, the severity of the disease is greater. The use of hepcidin mimetic treatments could therefore have a therapeutic role in promoting iron sequestration, reducing its availability to bacteria that proliferate in the intestine and promoting the healing of lesions,” concludes Peyssonnaux.