Influenza: combating bacterial superinfection with the help of the microbiota 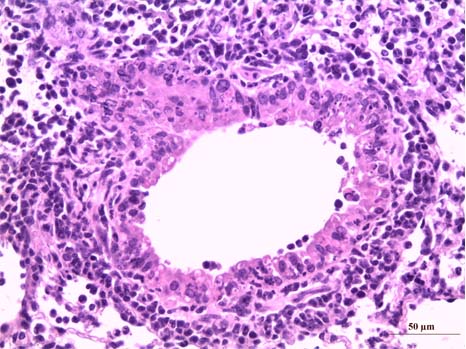 Section of lungs infected with influenza virus with a major inflammation which results in a marked infiltration of neutrophil polynuclear cells, dark cells. © Inserm/Si-Tahar, Mustapha

Researchers from the CNRS, INSERM, the Institut Pasteur de Lille, INRAE (France) and from Brazilian (Belo Horizonte), Scottish (Glasgow) and Danish (Copenhagen) laboratories have shown for the first time in mice that perturbation of the gut microbiota caused by the influenza virus favours secondary bacterial superinfection. Published in Cell Reports on March 3, 2020, these results open up new prospects for the prevention and treatment of bacterial pneumonia, a major cause of death in elderly or vulnerable people infected with the influenza virus.

Influenza and its complications continue to be a significant public health concern as well as a major social and economic burden. Vaccination campaigns, together with the discovery of new antiviral therapies, provide preventive and therapeutic solutions. However, impairment of defence mechanisms against secondary bacterial infections, which considerably worsen the clinical picture of people with influenza, remains a major problem.

Specializing in the field of pulmonary immunity, a team led by François Trottein, a CNRS researcher at the Lille Centre for Infection and Immunity (CNRS/INSERM/Institut Pasteur de Lille/University of Lille/CHU Lille), focused on the gut microbiota, well known for their key role in many physiological processes, including immune defence mechanisms. Scientists have shown that, in mice, influenza temporarily alters the composition and metabolic activity of the gut microbiota, probably due to reduced food consumption during illness. During influenza, the production of short-chain fatty acids by the bacteria of the microbiota is also diminished. The team has now shown that these fatty acids remotely favour the bactericidal activity of macrophages present in the lungs.  Perturbation of the intestinal microbiota by influenza thus compromises lung defences, particularly against Streptococcus pneumoniae, the leading cause of bacterial pneumonia in humans.

The researchers also showed that this sensitivity to bacterial superinfection can be corrected by treatment with acetate, one of the main short-chain fatty acids produced by the microbiota. Their work could have practical applications for the well-being of infected patients, who would be better protected against influenza-related complications.  This work was made in collaboration with scientists from the Micalis Institute (INRAE/AgroParistech/Université Saclay), the Lille Inflammation Research International Center (INSERM/Université de Lille/CHU Lille), the Laboratory of Design and Application of Bioactive Molecules (CNRS/University of Strasbourg), the Molecular Virology and Immunology Unit (INRAE) and GenoScreen (Lille), the Universidade Federal de Minas Gerais (Belo Horizonte, Brazil), the Institute of Molecular, Cell and Systems Biology (Glasgow, Scotland) and the Department of Pharmacology (University of Copenhagen, Denmark). This discovery represents a major breakthrough in the understanding of the mechanisms behind bacterial superinfections in influenza patients. It could lead to the development of new nutritional and/or therapeutic strategies to better control bacterial infections.

In response to the 2014-2016 Ebola epidemic, the clinical development of a two-dose regimen of vaccines Ad26.ZEBOV and MVA-BN-Filo was accelerated. Approved in 2020 by the European Commission for use in epidemic emergencies, this regimen continues to demonstrate its relevance. An Inserm ...