Improved understanding of the diabetic process via the Rfx6 gene

For the first time, the team led by Gérard Gradwohl, an Inserm Research Director at the Institute of Genetics and Molecular and Cellular Biology, Illkirch (IGBMC/Inserm-CNRS-University of Strasbourg), has shown that the Rfx6 gene is essential for the functioning of the cells that produce insulin, the pancreatic beta cells. In adult mice, this gene has proved important not only for allowing the secretion of insulin, but for also playing a major role in beta cell identity. As a logical progression of this work carried out in the rodent, the team led by Raphaël Scharfmann, an Inserm Research Director (Unit 106, “Cochin Institute”/Inserm-Paris Descartes University-CNRS) has confirmed these results in human pancreatic beta cells and in a 6 year old child with neonatal diabetes.
Both of these studies are published in the 11 December 2014 issue of the journal Cell Reports. 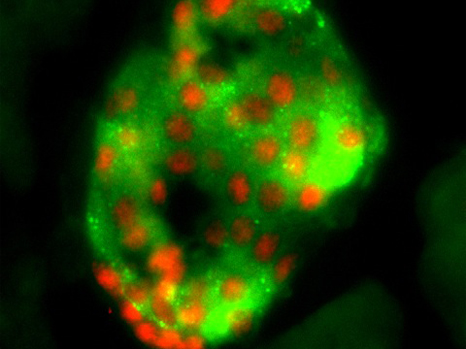 Immunofluorescence, histological section of an islet of Langerhans from an adult mouse pancreas showing expression of Rfx6 transcription factor (red) in the β-cell nuclei (stained green with insulin) ©Julie Piccand

In 2010, scientists provided evidence that the Rfx6 gene plays a key role in the formation of insulin-producing cells. In mice where this gene was mutated or deleted (absent), severe diabetes appeared at birth, resulting in death of the pups. In human newborns with mutations, neonatal diabetes is diagnosed very early, and then controlled with insulin treatment.

Among the factors involved in neonatal diabetes, Rfx6 is acquiring the status of an essential gene in the control of insulin secretion, and is therefore potentially involved in the diabetic process in adults. Indeed, researchers at IGBMC have created animal models in mice, in which the mature β-cells have been modified so as to inactivate their Rfx6 gene. The result: these mutant mice show glucose intolerance (prediabetes). By what mechanisms? Without Rfx6 expression in β-cells, several critical steps in glucose-induced insulin secretion are disrupted, such as glucose detection, electrical activity of the β-cells and calcium ion flux.

In fact, Rfx6 directly regulates the expression of key genes controlling these processes. This sequence of steps leads to the secretion of insulin according to fluctuations in blood sugar levels, and disruption of the steps causes defective insulin production.

Even more surprisingly, on examining the transcriptome of mutant mice (without Rfx6), Gérard Gradwohl’s team observed that genes that are normally repressed in β-cells become active. These genes, known as “disallowed,” are expressed instead of remaining silent. Their activation then leads to loss of β-cell identity. In a manner of speaking, they undergo dedifferentiation and “forget” their raison d’être and function.

As a logical progression from this work carried out in the rodent, Raphaël Scharfmann’s team has confirmed the results for human β-cells. For 30 years, researchers throughout the world had been trying to reproduce these β-cells in the laboratory in order to study them and understand their dysfunction. In 2011, Raphaël Scharfmann and his academic and industrial collaborators from the EndoCells company were the first in the world to produce functional human β-cell lines in vitro. They therefore possessed the necessary “toolkit” to explore the role of Rfx6 in humans.

Moreover, their genetic analyses of children with neonatal diabetes had shown mutations in the Rfx6 gene, without their knowing what its role might be in the disease.

The researchers therefore sought to crack the Rfx6 mystery simultaneously in normal functional human β-cells, β-cells in which the Rfx6 gene was not expressed, and in a 6 year old child with neonatal diabetes.

Their studies show, like those of the researchers in Strasbourg, that Rfx6 plays a central role in controlling not only insulin production in β-cells, but also the secretion of insulin into the bloodstream.

More specifically, Rfx6 acts on the β-cell membrane by controlling the opening and closing of the Ca2+.(calcium) channels. Normally, glucose enters the pancreatic β-cell by facilitated diffusion. This entry causes a cascade of reactions that lead to the opening of the calcium channels that allow the release of insulin into the bloodstream. Where Rfx6 is mutated and nonfunctional, it prevents the opening of the Ca2+.channels, and blocks subsequent insulin secretion.

For the researchers, this work has three-fold value. It confirms the results obtained in the rodent model. It also makes it possible to scientifically validate the interest of β-cells produced in the laboratory as a genuine tool for exploring the mechanisms of diabetes. Finally, from a therapeutic perspective, it might be very interesting to develop a treatment that modulates the opening and closing of Ca2+ channels.