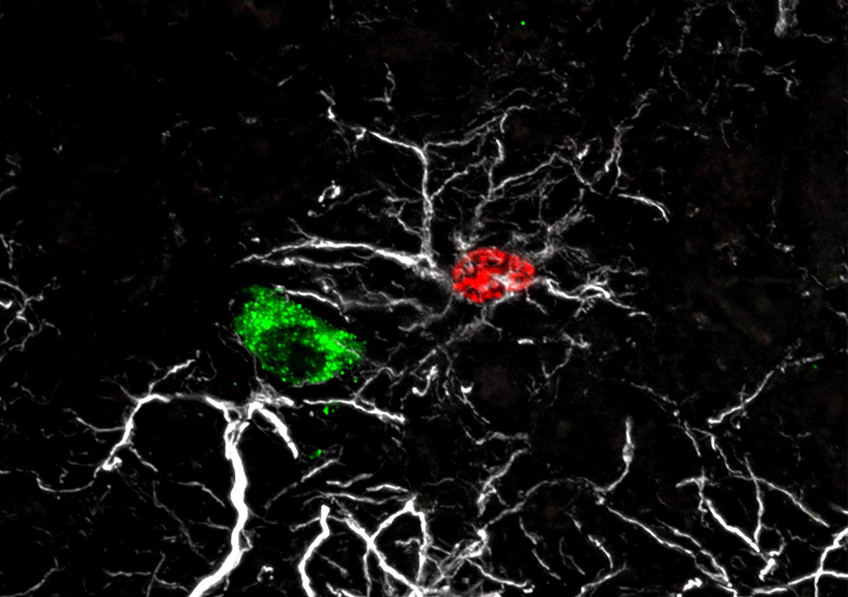 Astrocyte born during the infancy period (red) (7 to 20 days after birth) adhering to a GnRH neural cell body (green). The astrocytes’ processes are shown in white. © Vincent Prévot, Inserm.

Researchers from Inserm, Lille University Hospital and Université de Lille, at the Lille Neuroscience and Cognition laboratory, have discovered one of the mechanisms by which endocrine disruptors can alter reproductive function development from birth. At the neural level, they saw in animals how exposure to low doses of bisphenol A – a known endocrine disruptor – a few days after birth disrupts the integration of GnRH neurons within their neural circuit and alters their reproductive function regulation activity. The findings of this study have been published in Nature Neuroscience.

In mammals, reproduction is regulated by the GnRH neurons, a population of neurons that, during embryonic development, appears in the nose and then migrates to the hypothalamus in the brain. Being well established in the brain at birth, these neurons go on to control the various processes associated with reproductive function: puberty, acquisition of secondary sexual characteristics, and fertility in adulthood.

To perform their functions, the GnRH neurons must be surrounded by another type of neural cell: the astrocytes. The adhesion of the astrocytes to the GnRH neurons plays a decisive role in their integration within the neural network. The encounter between these two cell types takes place during the so-called “mini-puberty” period that begins one week after birth in mammals, when the GnRH neurons are first activated, and which is when the first sex hormone secretions occur.

“Failure of GnRH neurons to integrate during mini-puberty may lead to a predisposition to developing puberty and/or fertility disorders, and also potentially affect brain development, thereby leading to learning disorders or metabolic disorders, such as being overweight,” explains Vincent Prévot, Inserm Research Director and last author of the study.

But how does this encounter between GnRH neurons and astrocytes take place? According to the findings of this research, the astrocytes do not get there by chance but respond to molecular signals emitted by the GnRH neurons, which recruit them as soon as they appear in the hypothalamus.

Going further, the researchers wanted to understand the importance of this meeting between astrocytes and GnRH neurons in the development of mammalian reproductive functions during the mini-puberty period. With recent studies having shown that the GnRH neural network is particularly sensitive to endocrine disruptors and that there is a link between the latter and puberty disorders, the researchers investigated the impact of exposure to one of these endocrine disruptors, bisphenol A, in rats.

Bisphenol A is a compound used in the industrial manufacturing of plastics whose endocrine disruptive nature is now widely recognized. It is used for example in the production of food containers such as drinks bottles and baby feeding bottles. It is also found in the protective linings of drinks cans and tinned food, or on till receipts where it is used as a developer. In France, bisphenol A has been banned from use in baby feeding bottles and other  food containers since 2015. It has been replaced with substitutes such as bisphenol S (BPS) and bisphenol B (BPB) which also raise questions regarding their safety.

“Despite its ban, bisphenol A continues to remain present in our environment due to the slow degradation of plastic waste, and also because people are still using food containers they had purchased before 2015. With the recycling of waste, bisphenol A from plastics produced before 2015 has also found itself in new products,” explains Prévot.

During the 10 days following their birth, the female rats received low-dose injections of bisphenol A. Using an astrocyte labelling technique, the researchers saw that, under the effect of bisphenol A, the astrocytes were unable to permanently adhere to the GnRH neurons. The absence of such a phenomenon

occurring between these nerve cells then led to delayed puberty and the absence of estrous cycles in the adult female rats (equivalent to the menstrual cycle in women), suggesting that reproductive functions are affected.

“Our findings suggest that early exposure to chemicals in contact with food, such as bisphenol A, can disrupt the onset of puberty and have a lasting impact on reproductive functions, by preventing GnRH neurons from building an appropriate and necessary environment in the hypothalamus for their role as fertility coordinator,” explains Ariane Sharif, lecturer at Université de Lille, who co-led the study.

Taking this research further, the scientists are now seeking to understand the exact mechanism by which bisphenol A prevents communication between GnRH neurons and astrocytes. One hypothesis is that bisphenol A acts directly on the astrocytes’ receptors, preventing them from adhering to the GnRH neurons. The research team is also interested in the action of bisphenol A on DNA and the traces it may leave.

Charcot-Marie Tooth disease is the most common hereditary neurological disease in the world. It affects the peripheral nerves and causes progressive paralysis of the legs and hands. No treatment is currently available to fight this disease, which is due to the overexpression ...

Member of the “Development and Plasticity of the Neuroendocrine Brain” team

4 Service of Endocrinology, Diabetology and Metabolism, University Hospital and Faculty of Biology and Medicine, Lausanne, Switzerland.