In 2010, Sweden has the longest life expectancy at birth (79.6 years) for men in the European Union and Lithuania the shortest (68 years), a gap of almost 12 years. Swedish men also have the most Healthy Life Years (71.7 years) with men in the Slovak Republic having the least (52.3 years), a gap of almost 20 Healthy Life Years. And again Sweden has the highest proportion of years lived without disability (HLY/ LE) in 2010 with 90% of life expectancy without limitations in usual activities. Men in the Slovak Republic on the other hand spend the lowest proportion without disability (73%), a difference of 17 percentage points. This suggests that for men the longer the life expectancy the greater the proportion lived without disability.

In this short period 2008-2010 and despite its low life expectancy and HLY for men, Lithuania experienced the largest gain in HLY, almost three years, whilst the Netherlands saw the largest decline (a loss of 1.3 years). So there is also a tendency for health expectancies in Europe to converge since the gap between Lithuania and the Netherlands fell by more than four HLY in just 3 years. See attached tables for all figures 2008-20010 by Member State. 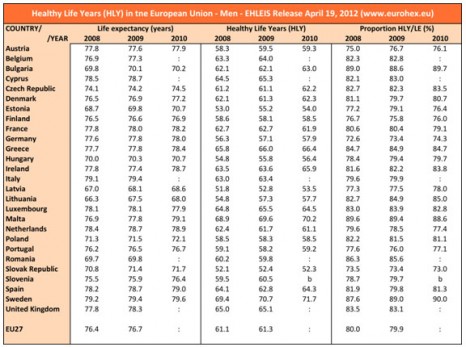 In 2010, France and Spain have the longest life expectancy at birth (85.3 years) for women in the European Union and Bulgaria the shortest (77.4 years), a gap of nearly eight years. In 2010 Malta has the highest HLY (71.6 years) for women and the Slovak Republic the lowest (52.1 years), the gap being the same as for men at almost 20 years. However for women in 2010, it is in Bulgaria that the proportion of years lived without disability (HLY/LE) reaches its maximum with 87% of life spent free of activity limitation. This contrasts with the Slovak Republic where women spend the shortest proportion (66%), a difference of 21 points. The results for Bulgaria show that a short life expectancy combined with a low prevalence of activity limitation leads to a large proportion of life expectancy apparently free of disability.

In the short time period 2008-2010, it is again Lithuania that experienced the largest gain in HLY in women (2.4 years), confirming the observation made for men, whilst Finland saw the largest decline (a loss of 1.7 years). As in men, women’s health expectancies show some convergence. 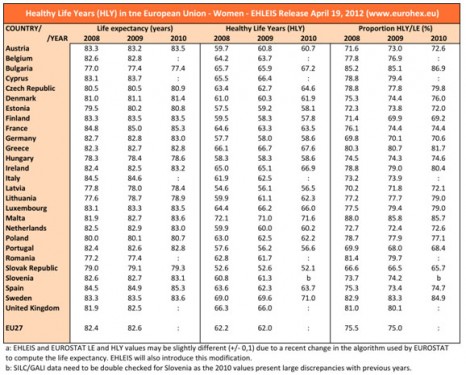 Differences between men and women

Whilst the gap in life expectancy (LE) between men and women is around 6 years (5.9 years) in the European Union in 2009, the gap in HLY is less than one year (0.7 years). Thus the proportion of years lived without disability is 5 percentage points lower for women compared to men (75% vs. 80%).

In 2010, Lithuania has the largest gap in life expectancy (LE) between men and women (10.9 years) and Sweden the smallest (4 years). Lithuania has also the largest gap in HLY (4.6 years) and the Slovak Republic the least (0.2 years). When these two measures are looked at in combination, Portugal has the largest gap in the proportion of years free of disability (HLY/LE) between men and women at almost 9 percentage points and Bulgaria the smallest gap at around about 3 percentage points. But in all European countries women live longer than men and spend a greater proportion of their lives with disabilities. Differences in HLY between men and women are much smaller than differences in life expectancy and in seven cases out of 27 (see figures for 2009), men experience a slightly more HLY than women. This is indeed the case in 2009 for Belgium, Denmark, Italy, the Netherlands, Portugal, Spain and Sweden, a significant number of western European countries.

France, which has the longest female life expectancy in 2009, occupies the 10th place in terms of HLY, illustrating a case where long life does not coincide with a low report of activity limitation. French men occupy respectively the 8th place (out of 27 MS) in terms of life expectancy and 11th place for HLY with respect to 2009 values.

The HLY (Healthy Life Years) is an important European policy indicator and was selected as part of the Lisbon Strategy (2000-2010) to assess the quality of life and functional health status of Europeans. The HLY is also part of the European Community Health Indicators (ECHI) and was set as the overarching target of the first partnership of Innovation Union (research and development component of the new strategy Europe 2020): the Active and Healthy Ageing Partnership, the target being an increase in HLY in the European Union of two years by 2020. HLYs are obtained by applying the prevalence of disability observed in the general population to a standard life table to distribute the years lived into those lived with disability and those lived free of disability. For HLY, the prevalence of disability comes from the annual EU-SILC survey whose implementation is coordinated by EUROSTAT. The prevalence of disability is measured by a general question on activity limitations known as the GALI question: To what extent have you been limited for at least 6 months, due to health problem, in activities people usually do? EUROSTAT calculates and disseminates the HLY as it does for all European policy indicators. The objective is to provide in year t (i.e., 2012) the HLY indicators of year t-2 (i.e., 2010). The Joint Action EHLEIS performs calculations in parallel and compares its results with those of EUROSTAT. The European Joint Action, supported and supervised by the European Commission, disseminates widely the results for all ages (not just birth and age 65 years) through country reports, dedicated websites, Wikipedia, and other media, encourages correct interpretation through training material and an interpretation guide, promotes their use in policies and, lastly and most importantly, produces in-depth analyses of trends and gaps in HLYs and their determinants.
TO CITE THIS POST :
Press release – Inserm press room Life expectancy (LE) and Healthy Life Years (HLY) in the European Union, 2008-2010 Link : https://presse.inserm.fr/en/life-expectancy-le-and-healthy-life-years-hly-in-the-european-union-2008-2010/1601/