Detrimental effect of obesity on lesions associated with Alzheimer’s disease

Researchers from Inserm and the Université Lille/Université Lille Nord de France have recently used a neurodegeneration model of Alzheimer’s disease to provide experimental evidence of the relationship between obesity and disorders linked to the tau protein. This research was conducted on mice and is published in the Diabetes review: it corroborates the theory that metabolic anomalies contribute massively to the development of dementia.

In France, more than 860,000 people suffer from Alzheimer’s disease and related disorders, making them the largest cause of age-related loss of intellectual function. Cognitive impairments observed in Alzheimer’s disease result from the accumulation of abnormal tau proteins in nerve cells undergoing degeneration (see the picture below). We know that obesity, a major risk factor in the development of insulin resistance and type 2 diabetes, increases the risk of dementia during the aging process. However, the effects of obesity on ‘Taupathies’ (i.e. tau protein-related disorders), including Alzheimer’s disease, were not clearly understood. In particular, researchers assumed that insulin resistance played a major role in terms of the effects of obesity.

“At the end of this diet, the obese mice had developed an aggravated disorder both from the point of view of memory and modifications to the Tau protein”

explains David Blum, in charge of research at Inserm.

This study uses a neurodenegeneration model of Alzheimer’s disease to provide experimental evidence of the relationship between obesity and disorders linked to the tau protein. Furthermore, it indicates that insulin resistance is not the aggravating factor, as was suggested in previous studies.

“Our research supports the theory that environmental factors contribute massively to the development of this neurodegenerative disorder” underlines the researcher. “Our work is now focussing on identifying the factors responsible for this aggravation” he adds.

The degeneration of neurons in Alzheimer’s disease 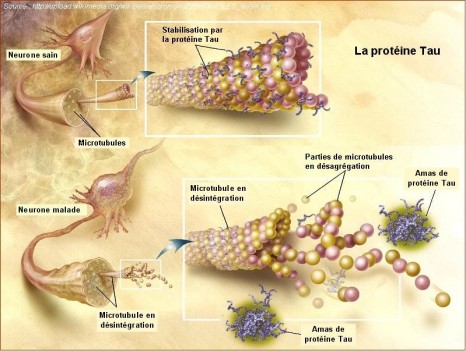 This research was supported by LabEx DISTALZ (development of Innovative Strategies for a Transdisciplinary Approach to Alzheimer’s Disease) within the framework of future investments.

For the first time, a team led by Inserm researchers Jean-Luc Martinot and Éric Artiges at the Developmental Trajectories and Psychiatry laboratory (Inserm/ENS Paris-Saclay) and the Borelli Center (CNRS/Université Paris-Saclay) looked for factors that would predict the onset of anxiety disorders ...