For 5 weeks, 5 international research teams will conduct a scientific expedition in Nepal, in the heart of the Himalayas, close to the summit of Mount Manaslu (8,156 m). The French component of the expedition, coordinated by a researcher from Inserm (Unit 1042, “Hypoxia and Cardiovascular and Respiratory Pathophysiologies,” Inserm/Université Joseph Fourier), will conduct an original project on the impact of altitude on the brain and heart, and on sleep disturbances induced by altitude. The French researchers will also study the benefit of a mask specially designed to improve oxygenation in combating the symptoms of acute mountain sickness. To do this, 50 volunteers will accompany them on this 5,000 m high trek. 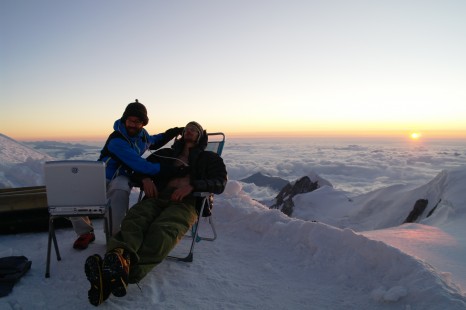 The development of recreational activities, and the increasing number of periods spent at medium and high altitude by people who are often inexperienced raises the issue of altitude intolerance. These problems of adaptation are the result of physiopathological mechanisms associated with the progressive reduction in oxygen availability as one rises to higher altitudes.

These illnesses, which are disabling to the point of interrupting one’s period at high altitude, and can be serious or even fatal, are acute mountain sickness (a combination of symptoms such as headache, fatigue, nausea, etc.), high altitude pulmonary oedema, (usually associated with a cough, and breathlessness due to a potentially serious fluid accumulation in the lungs), and high altitude cerebral oedema (fluid leakage in the brain, a particularly serious phenomenon, with marked effects on behaviour). Acute forms occur in people who are poorly acclimatised to altitude, with a rapid onset following exposure (6 h to 4 days). The more devastating forms occur even after acclimatisation, at altitudes above 5,000 metres. Generally speaking, one out of every two people is affected by acute mountain sickness above 4,000 metres, and three out of four people are affected above 5,000 metres.

These conditions may, to a certain extent, be avoided by following simple rules for prevention. However, it also appears that some people are more likely than others to develop these symptoms at high altitudes. Factors predicting altitude tolerance, the mechanisms underlying problems of adaptation, the management of these problems, and the optimum strategies for acclimatisation are still particularly poorly known.

These are the themes that will be studied by the French research team, under the coordination of Samuel Vergès, an Inserm Research Fellow at Unit 1042, “Hypoxia and Cardiovascular and Respiratory Pathophysiologies.” The team is made up of 6 experienced scientists and physicians, all of whom have experience of high mountains and scientific expeditions of this type.

A first research project on the heart and brain

With three main strands, this project is aimed at using innovative and portable techniques (that can be used at high altitude) to define in detail the effects of spending a period at high altitude on the brain and heart, and to assess the effect of a positive expiratory pressure ventilation mask on these cerebral and cardiac responses.

In vitro and in vivo studies show that lack of oxygen impairs neuronal function and may reduce human cognitive performance. A series of studies in the laboratory and at high altitude (VALLOT Observatory, Mont Blanc massif) has revealed significant brain disturbances induced by hypoxia, both in the initial hours of exposure and after several days. The anatomy of the brain, cerebral perfusion and oxygenation, and motor neuron function are particularly affected by hypoxia, a finding that has led to reconsideration of the mechanisms for adapting to altitude, with inclusion of the brain component as a factor that probably plays a major role.

High altitude exposure is associated with major cardiac changes. Previous studies have shown that acute hypoxia leads to changes in the relaxation properties of the myocardium. A reduction in the contractile properties of the cardiomycytes might be responsible for this phenomenon, although objective proof has not yet been obtained. Many studies have also shown that exposure to high altitude generates changes in the right ventricle, which may play an important role in the relaxation of the left ventricle, although the mechanical phenomena involved are incompletely known.

In recent times, a new technology based on following the acoustic signatures produced during echocardiography (Speckle Tracking Imaging) has made it possible to measure myocardial speeds and deformations in a comprehensive manner, allowing investigation of the myocardium’s contractility and ability to relax, thus opening up new perspectives in the understanding of the effects of altitude hypoxia on the heart.

Applying positive expiratory pressure (PEP) at mouth level in individuals under high altitude conditions allows an artificial increase in the intra-pulmonary pressure, and has been suggested by some research teams as a possible method for preventing or minimising the harmful effects of high altitude. Researchers at the Hypoxia-Physiopathology Laboratory (HP2) in Grenoble recently demonstrated the utility of this method for increasing oxygenation of the blood and muscles.[1]

Their results suggest that a portable mask type device inducing an increase in expiratory pressure might constitute an original and effective non-pharmacological method for improving altitude acclimatisation and alleviating the symptoms associated with acute mountain sickness. A large-scale field study at a high mountain location is needed to determine whether PEP is likely to become widely used method. The commercialisation of a PEP mask system may be envisaged, given its advantage of being portable, compact, non-medicinal and usable by most people.

A second project on the impact of altitude on sleep

Altitude is known to profoundly disrupt sleep and induce sleep apnoea, known as central sleep apnoea. From an altitude of 2,500 m, a moderate reduction and cyclic oscillations are observed in blood oxygenation. The development of these disorders is also accompanied by a reduction in sleep efficiency, an increase in the time it takes to fall asleep, a shortening in the duration of phases of deep sleep, and a substantial increase in intrasleep awakenings. The quantification of these disorders was for a long time limited to the analysis of oscillations in arterial O2 saturation.

However, at the present time, one question has not had a clear answer: is central apnoea a marker of bad or good adaptation of the body to altitude? This question is important because there are large intersubject variations in the intensity of sleep disturbances induced by altitude exposure. It was recently shown in the laboratory directed by Samuel Vergès that individuals showing severe symptoms of high altitude intolerance (in the course of one night in an altitude simulation laboratory) have less sleep apnoea than comparable individuals who tolerate high altitude well. However, this remains to be established in the field at high altitude.

Study of this question should improve understanding of the mechanisms of adaptation to altitude, and influence the advice and assessments offered to people travelling to high altitude.

The study proposed by the French group within the scientific expedition therefore has the following objectives:

The researchers’ study of the effects of lack of oxygen on the healthy body at high altitude should enable a better understanding of the consequences of lack of oxygen on some patients at normal altitudes, for example those with respiratory diseases. The high altitude is thus a real open-air laboratory, constituting an original study model for the adaptive abilities and limitations of the human body.

An initial phase of study at normal altitude

All participants in the trek and Manaslu climb made themselves available, between 16 and 23 February last, for a battery of scientific and medical assessments at sea level in Wales (Bangor University). All measurements that will be done at high altitude were carried out at sea level, thus enabling reference values to be obtained for every subject, for comparison with measurements taken at high altitude. 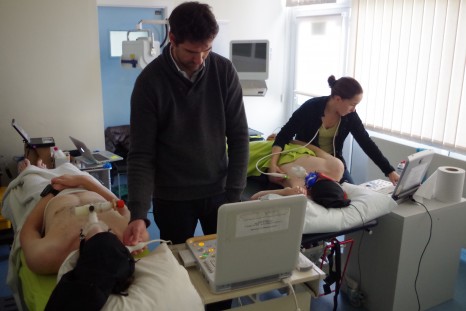 The phase of testing at normal altitude was an opportunity to address technical and logistic issues that needed to be resolved so that the tests can be repeated under the best possible conditions at high altitude at reduced atmospheric pressure (which strongly affects equipment), and in the cold (down to -20°C), and when the bodies of both the researchers and volunteer subjects will be severely affected by the altitude.

A science laboratory installed at 5,000 metres

Five groups of 10 people will leave Kathmandu at intervals of 1 day each to spread the measurements. It will take 10 days to reach the destination. The 5 international research teams will set up their laboratory and all the necessary logistics (tents, production of solar and wind energy, etc.) slightly above the Manaslu base camp, at a little over 5,000 metres altitude. Most of the high altitude measurements will be performed on all those participating in the trek, who will arrive day after day. Other measurements will be performed during the trek and during the Manaslu climb (8,156 m). The entire expedition will last 5 weeks, from 21 March to 26 April.

As with assessments carried out at normal altitude, assessments will involve measuring the pulmonary extravascular fluid by pleuropulmonary ultrasound, cerebral perfusion by transcranial Doppler, cerebral oxygenation by near-red spectroscopy, and cardiac function by Speckle Tracking echocardiography, before and during ventilation under positive expiratory pressure. Symptoms will be assessed by questionnaire. Finally, sleep will be assessed during nights spent in tents at the Manaslu base camp, by placement of various sensors that enable identification of the quality of sleep, and the occurrence of sleep apnoea associated with a drop in blood oxygenation, such as is frequently observed at high altitude. These measurements are identical to the tests known as polygraphy that are carried out in sleep laboratories in hospitals to diagnose sleep apnoea syndrome in patients.

Following 4 days of acclimatisation at 5,000 metres, this battery of tests will be repeated in order to observe the adaptations of the human body to this high altitude. All participants will spend 10 days at base camp, and the team will then complete the Manaslu circuit with a 3-day descent to Beshisahar.

The participants in this trek show a classic profile of populations taking part in treks at high altitude, aged from 22 to 65 years, with relatively varied levels of physical fitness and altitude experience. They have volunteered to complete a trek of several weeks around Manaslu and have also volunteered to participate in scientific experiments in this context, including 5 consecutive days at the camp located at the highest point in the Manaslu circuit, where the laboratories will be installed.

MEDEX (www.medex.org.uk) was created in Great Britain in 1992 to encourage scientific and medical expeditions. Since then, several large-scale scientific expeditions have been organised at 4-5 year intervals: Everest in 1994, Kanchejunga in 1998, Hongu in 2003 and Hidden Valley in 2008. These expeditions have led to major scientific and medical advances associated with altitude, resulting in scientific publications, news stories for the general public, and training activities for professionals and high mountain climbers.

During this expedition, 4 other scientific projects will be conducted at the same time as the 2 conducted by Samuel Vergès’ team.

Following the expedition on social media


To bring a scientific expedition to life for Internet users as if they were there, even though the location (the summit of Manaslu) is particularly inaccessible, Inserm is doing all it can to follow the expedition. Enriched content (photos or videos) will be posted daily on @Insermlive and on the Institute’s Facebook page. From the day-to-day (plan, arrival at location, setting up), to details of scientific experiments (design, goals, measurements, etc.)

A relay on @inserm_en is also planned for the international community

At the Inserm press room, an instant discussion module will be open to take questions for the researchers before they leave and after they return.

[1] These results have been published in PlosOne