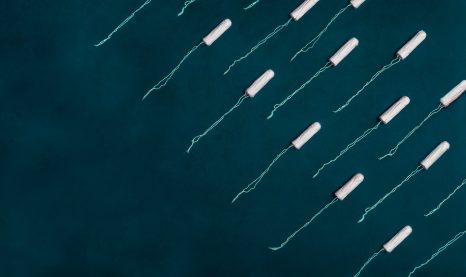 Tampon use is thought to currently concern around 60 to 80% of women in France. Credits:

Each year, some twenty cases of Staphylococcal toxic shock syndrome linked to tampon use are reported in France. Characterized by various symptoms, such as high fever and skin rash, it can lead to multiple-organ failure and death in the most extreme cases. Although its incidence remains rare, research teams from the International Center for Research in Infectious Diseases (Inserm/CNRS/ENS de Lyon/Université Claude Bernard Lyon 1) and the National Reference Center for Staphylococci (Hospices civils de Lyon/ Université Claude Bernard Lyon 1) have identified several risk factors, notably showing that wearing tampons for more than six hours or overnight is linked to an increased risk of toxic shock syndrome. This study was published in eClinicalMedicine on March 10, 2020.

Staphylococcal toxic shock syndrome associated with tampon use generated a lot of attention in the 1980s. Affecting almost 10 in 100,000 young women in the USA each year back then, its incidence has since fallen considerably thanks to the use of tampons made from cellulose fibers or cotton. Nevertheless, several cases are still being reported each year, on both sides of the Atlantic and primarily in adolescents. For the researchers it was therefore essential to identify the risk factors that increase the likelihood of developing this syndrome, especially since tampon use is thought to currently concern 60 to 80% of women in France.

Toxic shock syndrome is linked to the presence of Staphylococcus aureus in the vaginal microbiota of certain women, a bacteria which can produce the toxin TSST-1. However, the presence of this bacteria does not in itself explain toxic shock. The woman also needs to be using intravaginal protection (tampon, menstrual cup…) and she needs to lack the antibodies that are capable of fighting TSST-1. The fact that certain women fulfil these three risk criteria but do not develop complications suggests that the issue is not tampon use, but rather misuse.

In a study published in eClinicalMedicine, researchers from Inserm, CNRS, ENS, Université Claude Bernard Lyon 1 and Hospices Civils de Lyon, within the teams of the International Center for Research in Infectious Diseases and National Reference Center for Staphylococci, sought to identify the characteristics of tampon use that are linked to an increased risk of toxic shock syndrome.

The study took the form of a questionnaire, completed by 55 tampon users who had toxic shock syndrome between 2011 and 2017, and by 126 control women who had never had it. The median age of the participants was 17, which reflects the fact that it primarily affects young women. The questions concerned the length of time for which they wear tampons, their reading of the package leaflet enclosed with the tampons, and the education they had received on the subject.

The researchers have shown that the risk of toxic shock syndrome doubles when tampons are worn for longer than six hours, and triples when worn overnight (whereby the duration of use can be up to eight hours or longer). In addition, not reading the instructions supplied with the tampons, or not respecting them, is also linked to an increased risk of toxic shock.

“In the USA, the FDA recommends not exceeding eight hours of use, which is generally also stated on the tampon packs sold in France. Our study is the first to challenge this duration. In addition, we also wish to draw attention to the need to improve the education of adolescents. It is often their mothers who educate them on this, and although they are quite capable of explaining how to use tampons, they are not always properly informed about the risk of toxic shock and how to prevent it”, emphasizes study leader, Gérard Lina.

While menstrual toxic shock syndrome mainly affects adolescents, with a peak at around 15 years of age, the authors of the study call for inclusion of the subject in school sex education lessons and for greater involvement of the healthcare professionals of these young patients, in order to get the prevention messages across.