“Effective Perinatal Intensive Care in Europe: translating knowledge into evidence-based practice”, is the theme that will bring together the 12 institutions taking part in the EPICE project – Effective Perinatal Intensive Care in Europe – a European project funded by the EU 7th Framework Program “Health”, coordinated by Inserm. This meeting organised in Paris from the 25th to the 27th of October, will be the opportunity to mark the end of inclusions for a cohort of over 8000 very preterm infants and to provide feedback on preliminary results of the project, launched in 2011.

The EPICE project, set up 18 months ago, collects data from 19 European regions (shown in orange on the map) in order to identify the factors that promote the use of evidence-based medicine in the care of very preterm infants. 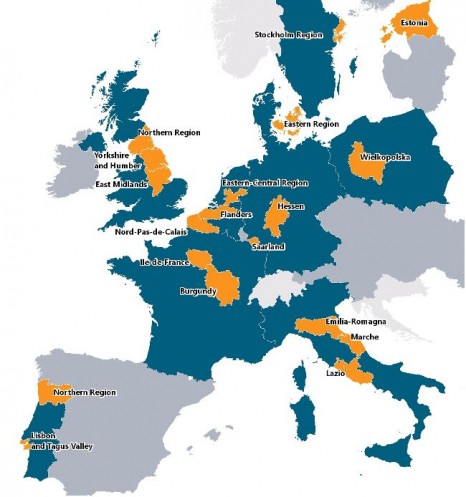 “The need to set up a European research project arose from the observation that mortality and morbidity rates for very preterm infants can vary by a factor greater than two between European regions”, states Jennifer Zeitlin, coordinator of the EPICE project and Researcher at Inserm (Unit 953 “Epidemiological Research Unit on Perinatal Health and Women’s and Children’s Health”).

Very preterm infants born before 32 weeks of gestation (the 8th month of pregnancy) represent between 1 and 2% of all births. They have a higher risk of mortality and long term neurological and developmental impairments than full term infants.

The EPICE project thus aims to improve the survival and long-term health of these children by ensuring that medical knowledge is translated into effective care. The project results will provide scientific knowledge on which to base intervention strategies to improve the use of evidence based medicine. It will also build a methodological and conceptual framework for future scientific work on the effectiveness of intervention strategies.

The development of evidence-based clinical-practice guidelines is one of the most promising and cost-effective tools for improving the quality of care The EPICE project researchers are studying a large range of interventions, in order to identify the factors that promote their dissemination in everyday clinical practice.

19 medical interventions have been selected based on their clinical importance, the solidity of the evidence base and the feasibility of collecting data. These interventions concern such aspects as:

– The use of antenatal corticosteroids to promote lung maturation prior to a very preterm delivery,

– The transfer of pregnant women before delivery to specialised centres with a neonatal intensive care unit (level III units),

– The restriction of post-natal corticosteroid use,

Since March 2011, two epidemiological studies have been running in parallel: the first is a cohort study of more than 8000 very preterm infants (between 180 and 1500 depending on the country); the second focuses on the maternity hospitals and neonatal units that care for these infants.

– The cohort study will provide data about the care of very preterm infants and their health from birth to discharge home. These data will be completed with information about health and development at 2 years of age by means of a questionnaire sent to the family.

– Questionnaires given to the medical teams of 261 maternity hospitals and neonatal units collect data on the characteristics of the units, their organization and protocols for use of selected medical interventions and procedures.

The project’s multidisciplinary team has expertise in obstetrics, neonatal medicine, epidemiology and health services research. By grouping and reinforcing national research initiatives, this project enhances cooperation and excellence in Europe.

Why is “evidence-based medecine” necessary?

Evidence-based medecine improves the quality of health care. It is defined by the solidity of the evidence proving the beneficial effects of a practice, its advantages and any risks involved in the treatment. It helps health professionals to select treatments and practices already proven to be effective.

The EPICE project is dedicated to the medical care of very preterm infants born before 32 weeks of gestation, in eleven European countries. The aim of the project is to assess practices in order to improve health care for this population of high risk babies.

The EPICE project was launched in 2011 and has been supported by the European Union (FP7) for five years. It is coordinated by Inserm, just like 27 other European “health” projects. The project involves 12 partners and 6 associate partners, based in 11 European countries.

The EPICE project in France is part of a national study entitled EPIPAGE 2 (an epidemiological study on very preterm babies). It is a cohort study of very preterm infants, launched in 2011 in the 22 regions of mainland France and the French overseas departments. The study will monitor over 6000 premature children up to the age of 11 to 12. Three regions in France: Ile-de-France, Nord-Pas-de-Calais and Bourgogne participate in EPICE project.

The EPIPAGE 2 project is managed by the Inserm unit 953 (“Epidemiological research into perinatal health and the health of women and infants”), in collaboration with team 2, from UMRS 1027, directed by Dr Catherine Arnaud (Perinatal epidemiology, handicap of child and health of adolescents.

For further information on this study: www.epipage2.inserm.fr (Head of studies: Pierre-Yves Ancel, Inserm U953)

Founded in 1964, the French National Health and Medical Research Institute (Inserm) is a public science and technology institute, jointly supervised by the French Ministry of Higher Education and Research and the Ministry of Health.

The mission of its scientists is to study all diseases, from the most common to the most rare, through their work in biological, medical and public health research.

With a budget of 905 million euros in 2011, Inserm supports more than 300 laboratories across France. In total, the teams include nearly 13,000 researchers, engineers, technicians and administrative staff, etc.

Inserm is a member of the National Alliance for Life and Health Sciences, founded in April 2009 with CNRS, Inserm, the CEA, INRA, INRIA, the IRD, the Pasteur Institute, the Conference of University Presidents – Conférence des Présidents d’Université (CPU) and the Conference of Chairmen of The Regional and University Hospital Centres – Conférence des directeurs généraux de centres hospitaliers régionaux et universitaires. This alliance forms part of the policy to reform the research system by better coordinating the parts played by those involved and by strengthening the position of French research in this field through a concerted plan.

Inserm is Europe’s leading European project instigator, with 28 projects coordinated by the Institute as part of the FP7 scheme.