Fine-tuning the approach to malaria and toxoplasmosis research

A study carried out by teams from the Institut Pasteur, the Institut Cochin (Inserm, CNRS, Paris Descartes University), and the Wellcome Trust Centre for Molecular Parasitology at the University of Glasgow, may very well redefine current approaches to malaria and toxoplasmosis research in terms of treatment development. Their research which focuses on the role played by the protein AMA1 (present in both parasites) was published october 9, on the Nature Communications website. For many years AMA1 has been the focus of studies aiming to develop malaria treatments and vaccines. However, the authors of this study express their reservations about strategies that focus strictly on blocking AMA1 and show that malaria and toxoplasmosis parasites without AMA1 are still capable of developing normally. 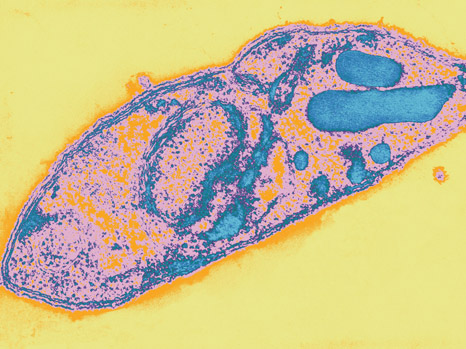 One million people die each year from malaria, making it the most widespread parasitic disease in the world today. Toxoplasmosis, which often presents no symptoms in healthy subjects, is a parasitic disease that mainly affects immunedeficient individuals. Pregnant women are also particularly at risk for this disease and if infected for the first time during their pregnancy could spread infection to the fetus.

Plasmodium and Toxoplasma, genera of apicomplexan parasites, are the agents responsible for these diseases. They both contain the same protein, AMA1, which many studies consider necessary for parasites to enter host cells and propagate infection. Because of this, numerous studies conducted since the discovery of the protein have made it their primary focus in the development of anti-parasitic treatments. However, this trend may soon change, thanks to the collaborative efforts of Robert Ménard (Institut Pasteur, Paris), Isabelle Tardieux (Institut Cochin, Paris), Markus Meissner (University of Glasgow), and their teams. These scientists recently showed that in the total absence of AMA1 Plasmodium berghei and Toxoplasma gondii are still capable of entering infected cells and multiplying. This discovery could have a significant impact on how research is conducted in the development of treatments for malaria and toxoplasmosis.

In 2011, the scientists had already shown that parasites genetically modified with very low levels of AMA1 were still able to infect host cells. In today’s study, parasites were created free of all AMA1 using “reverse genetics” (a technique never before used in this field). The scientists showed that in the absence of AMA1, during the blood and hepatic stages of Plasmodium berghei, as well as during the replication stage of Toxoplasma gondii (the stage where the disease spreads to humans), the parasites were still able to enter host cells. What was affected by the lack of AMA1, however, was the parasites’ ability to bind to host cells (this is the step that precedes cell entry). Because of this, the scientists concluded that AMA1 is not a requirement for cell entry but rather is used to bind parasites to the host cells. These observations have prompted the scientists to put forward new recommendations for optimizing research that focuses on AMA1 for the development of new treatments. In particular, they suggest that therapeutic strategies and vaccine development should focus on other proteins in addition to AMA1.