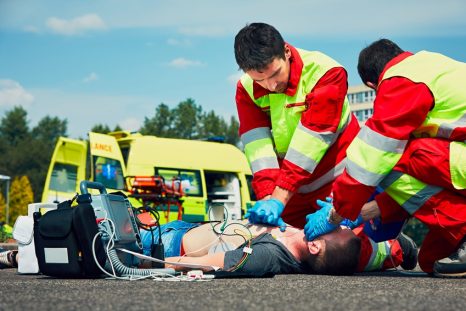 Multidisciplinary teams from the AP-HP Paris public hospitals network (SAMU75 emergency response dispatch centers and Hôpital européen Georges-Pompidou), as well as from Inserm, the Université Paris-Descartes, and the Paris BSPP medical emergency service, compared, in the French capital, two strategies of extracorporeal cardiopulmonary resuscitation (ECPR) used in patients suffering refractory cardiac arrest (defined as lack of return of spontaneous circulation after 30 minutes of resuscitation). The results of this study, which took place between November 2011 and December 2015 and involved 156 patients, were published on the website of the journal Resuscitation on April 14, 2017 and show that an aggressive strategy significantly increases patient survival following discharge from intensive care and with a favorable neurological prognosis.  It is the largest cohort to be studied in Europe and the United States.

Every year, approximately 50,000 adults in France die from cardiac arrest, which is fatal within minutes unless treated. At present, less than 5% of refractory cardiac arrest victims survive, hence the importance of an early and appropriate response.

In the Greater Paris region (Ile-de-France) at present, the emergency services dispatched by the SAMU75 hubs located within the AP-HP hospitals network use ECPR in the pre-hospital setting in patients with refractory cardiac arrest and potential for neurological recovery. These patients are selected according to a very precise algorithm in which, for example, they must have received chest compressions very soon after onset of the arrest and present signs of life (movement, breathing, etc.) – even in the absence of cardiac activity. If ECPR is indicated, it must be initiated within 60 minutes of onset of the cardiac arrest.

The role of ECPR, which is normally used in cardiac surgery, is to take over from the patient’s failing heart and lungs. A cannula is placed in the femoral vein through which the blood will pass into a machine that generates circulation and gas exchange to mimic heart and lung function, before being returned to the body via another cannula, this time in the femoral artery.

(Extracorporeal Cardiopulmonary Resuscitation (ECPR) in the Prehospital Setting: An Illustrative Case of ECPR Performed in the Louvre Museum.

They compared two strategies that were used over two different periods:

> From November 2011 to December 2014, 114 patients received ECPR on arrival at hospital or directly at the site of the arrest, following 20 minutes of resuscitation by the emergency services.

> Throughout the year 2015, a team specialized in ECPR was deployed together with the initial response team for 42 cardiac arrests in patients under the age of 70 having already received chest compressions from bystanders immediately after onset. The ECPR was generally deployed before arrival at hospital. This pre-hospital ECPR was supplemented by other treatments, such as immediate coronary angiography.

This study shows that the second, more aggressive, ECPR strategy significantly increases survival following discharge from intensive care, with a favorable neurological prognosis. Without ECPR, these patients had virtually no hope of survival.

This study is supplemented by a European multicenter study which has been ongoing for several months.

Aedes mosquitoes are the principal vectors of dengue and other arboviruses, including Zika, for which no vaccines or antiviral treatments currently exist. Understanding the factors that influence the transmission of arboviruses from mosquitoes to humans is therefore a priority because it could ...