Repairing the cerebral cortex: it can be done

A team led by Afsaneh Gaillard (Inserm Unit 1084, Experimental and Clinical Neurosciences Laboratory, University of Poitiers), in collaboration with the Institute of Interdisciplinary Research in Human and Molecular Biology (IRIBHM) in Brussels, has just taken an important step in the area of cell therapy: repairing the cerebral cortex of the adult mouse using a graft of cortical neurons derived from embryonic stem cells. These results have just been published in Neuron.
The cerebral cortex is one of the most complex structures in our brain. It is composed of about a hundred types of neurons organised into 6 layers and numerous distinct neuroanatomical and functional areas.

A major challenge in repairing the brain is obtaining cortical neurons from the appropriate layer and area in order to restore the damaged cortical pathways in a specific manner.

The results obtained by Afsaneh Gaillard’s team and that Pierre Vanderhaeghen at the Institute of Interdisciplinary Research in Human and Molecular Biology show, for the first time, using mice, that pluripotent stem cells differentiated into cortical neurons make it possible to reestablish damaged adult cortical circuits, both neuroanatomically and functionally.

These results also suggest that damaged circuits can be restored only by using neurons of the same type as the damaged area.

This study constitutes an important step in the development of cell therapy as applied to the cerebral cortex.

This approach is still at the experimental stage (laboratory mice only). Much research will be needed before there is any clinical application in humans. Nonetheless, for the researchers, “The success of our cell engineering experiments, which make it possible to produce nerve cells in a controlled and unlimited manner, and to transplant them, is a world first. These studies open up new approaches for repairing the damaged brain, particularly following stroke or brain trauma,” they explain. 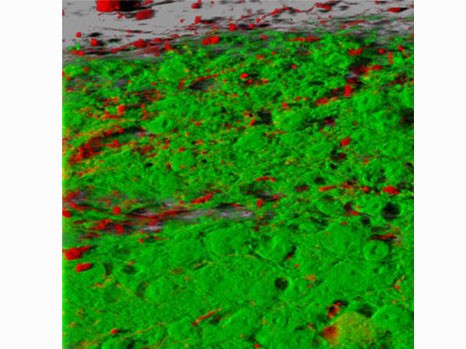 © A. Gaillard/Inserm. An illustration showing the integration of neurons transplanted into the brain following injury, two months after transplantation. Specific projections of the adult brain (red) into the transplanted neurons (green)

This project was funded by the French National Research Agency (ANR-09-MNPS-027-01).
TO CITE THIS POST :
Press release – Inserm press room Repairing the cerebral cortex: it can be done Link : https://presse.inserm.fr/en/repairing-the-cerebral-cortex-it-can-be-done/18316/