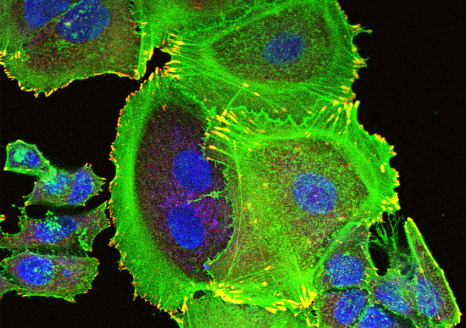 Although persistent organic pollutants (POPs) are already suspected to promote breast cancer, there has been little research into how they affect its aggressiveness. A research team from Inserm and Université de Paris in the Environmental Toxicology, Therapeutic Targets, Cell Signaling and Biomarkers laboratory has performed a preliminary study to explore the hypothesis that POPs could promote the development of breast cancer metastases. Its findings suggest a link between the aggressiveness of breast cancer and the levels of some POPs in adipose tissue, particularly in overweight women. While this research published in Environment International opens up new avenues for studying the impact of POPs on breast cancer, its findings must be taken with precaution given the limited number of subjects involved.

Breast cancer is a major public health concern with over 2 million new cases diagnosed and over 600,000 deaths worldwide in 2018. The presence of metastases distant from the original tumor is a marker of its aggressiveness. While the 5-year survival rate for cancer located only in the breast is 99%, this decreases to 85% if it has spread to lymph nodes and falls to 26% if distant metastases are present.

Recent studies have suggested that exposure to persistent organic pollutants or POPs (endocrine-disrupting and/or carcinogenic environmental pollutants that cannot be eliminated by the body) and which accumulate in the food chain1, is a risk factor for breast cancer. However, the influence of these POPs on its level of aggressiveness has received little attention.

A research team led by Xavier Coumoul in the Environmental Toxicology, Therapeutic Targets, Cell Signaling and Biomarkers laboratory (Inserm/Université de Paris) has been the first to test the hypothesis that exposure to POPs could affect the stage of development of metastases in breast cancer.

POPs are highly lipophilic and as such are stored in the adipose tissue. The researchers measured the levels of 49 POPs – including the Seveso dioxin (a waste product from incineration processes) and several PCBs (generated by various industrial processes) – in samples of adipose tissue surrounding the tumors of 91 women with breast cancer2. With excess weight (BMI > 25) known to promote and worsen breast cancer, special attention was paid to the women concerned.

Biological and statistical analysis of these samples enabled the researchers to reveal a link between the presence of distant metastases and dioxin levels in the adipose tissue of overweight women. What is more, in all patients, the concentrations of dioxin and two of the PCBs measured appeared to be linked to the size of the tumor as well as the invasion level and metastatic stage of the lymph nodes. Women with higher concentrations of PCBs were also found to have a higher risk of breast cancer recurrence.

These findings suggest therefore that the higher the concentration of POPs in the adipose tissue, the more aggressive the breast cancer, particularly in overweight women.

To explain this link, the research team has issued several hypotheses based on previous studies. One hypothesis is that dioxin and some PCBs send a signal which promotes tumor cell migration (an essential mechanism in the metastatic process), thereby reinforcing the cancer’s aggressiveness.

According to study leader Xavier Coumoul, “the adipocytes – the cells of the adipose tissue that store fats – play a major role as cells associated with the development of breast cancer. The adipose tissue works like an ʺendocrineʺ gland (secreting hormones into the bloodstream) and we had previously shown that POPs were responsible for the inflammation of this adipose tissue, changing the nature and behavior of the adipocytes. The excessive secretion of inflammatory molecules and the release of the POPs stored by these adipocytes could then promote the formation of metastases.”

However, the researcher insists on the fact that this study is only preliminary and that its findings must be considered with precaution, given the limitations in its methodology. A limited number of individuals were studied, which encourages statistical bias and means that some sub-categories of the study population cannot be considered to be highly representative. “While it does not enable us to draw firm conclusions on the link between POPs and the aggressiveness of breast cancer, it does open up a novel avenue for research, particularly in overweight patients. An avenue which should be explored by future studies with larger numbers of patients in order to offer more representative statistical findings”, concludes Coumoul.

2 Men were excluded from the study to limit statistical bias due to sex-specific biological differences.