On the 21 October 2014, Professor Philippe Menasché and his team from the cardiovascular surgery service of the Georges Pompidou European Hospital, AP-HP, carried out a transplant of cardiac cells derived from human embryonic stem cells*, according to a method developed by the Department of Cell and Tissue Biotherapies of the Saint-Louis hospital, directed by Professor Jérôme Larghero and through research led by this group within Inserm. The surgery, coupled with a coronary bypass*, was carried out on a woman of 68 years suffering from severe heart failure. Ten weeks after the intervention, the patient is feeling well, her condition has improved markedly, with no complications having been observed. This promising advance was presented this Friday, 16 January 2015 at the XXV European Days Conference of the French Society of Cardiology. 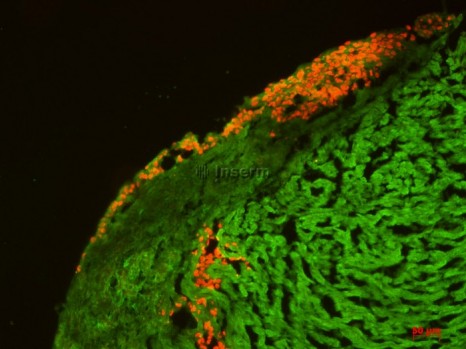 The transplant was carried out as part of a clinical trial developed by the Public Hospitals of Paris (AP-HP) and through the work of the teams from AP-HP, Inserm and the universities of Paris-Descartes and Paris-Diderot. The cardiac cells were prepared according to a technique developed by the Department of Cell and Tissue Biotherapies of the Saint-Louis hospital. The cytogenetics laboratory of the Antoine Béclère Hospital and the French General Agency for Health Products and Equipment also contributed to the preparation of this phase I trial which will enable the verification of the safety and feasibility of the procedure

For 20 years Professor Menasché, currently co-director of an Inserm team within PARCC (Paris Centre for Cardiovascular Research), and his colleagues have been involved in stem cell* therapy for heart failure.

The team first tested the implant of skeletal muscle stem cells in necrosed areas of the heart in the laboratory. These cells were implanted into the heart of a patient with heart failure for the first time in the world on 15 June 2000. Following an initial series of these implants, always coupled with a coronary bypass, the team coordinated a European multi-centre, randomised, placebo-controlled trial whose results have still not been able to establish any significant benefit of these cells on the contractile function of patients’ hearts.
One of the conclusions drawn from this trial was that to be fully efficient, transplanted cells should resemble the cells of the tissue to be repaired as much as possible, in this instance cardiac tissue. It was then decided to venture along the path of embryonic stem cells.  Derived from embryos conceived in in vitro fertilisation, these cells do in fact possess pluripotent properties, that is, they are capable of developing into any type of cell of the body, including of course cardiac cells, as soon as they receive the appropriate signals during the culture cycle in the laboratory.

In 2007, the team then composed of, among others, Michel Pucéat, Director of Research at Inserm, and Philippe Menasché showed that human embryonic stem cells could be differentiated into cardiac cells after being transplanted into the failing hearts of rats.
Since then, many experiments have been carried out on different animal species in order to validate the efficacity of these cells and to optimise conditions which can guarantee maximum safety. At the end of this stage, a bank of pluripotent embryonic stem cells was formed in the conditions which satisfied all regulatory constraints applying to biological products for human use. Then, the Department of Cell and Tissue Biotherapies of the Saint-Louis hospital, still in liaison with the Inserm teams, developed and tested “specialisation” procedures for cells in order to produce “young” cardiac cells from them.
The focus was then on the purification of the cells directed like so in order to ensure that the final product was expunged of any remaining pluripotent cells which could be potentially tumorigenic.

Besides, as initial experience with muscular stem cells showed the limitations of administering cells by multiple injections, their transfer is now performed using a patch that the cells are incorporated into. This patch is then placed on the area of the infarction. To that end, after the purification stage, the cardiac cells are incorporated into a circular fibrin gel which is applied, during the surgical procedure, to the necrosed area with just a few sutures ensuring that it is anchored to the cardiac tissue.

“This type of surgery is aimed at serious heart failure which doesn’t respond to the usual medicinal treatments but is not at the stage of a complete heart transplant. This is a promising advance, which we hope will enrich the therapeutic arsenal available to treat heart failure today” explains Prof. Menasché. “We are continuing the trial, which authorises us to carry out four other transplants. It would seem already that the benefits of the cells are linked mainly to the substances that they secrete.  The direct administration of the substances, without going through a transplant of productive cells, is a path to explore”.

This project has been entirely financed by funds from public intstitutions and societies and was authorised by the French National Agency for the Safety of Medicines and Health Products (ANSM) after agreement with the Agency for Biomedicine for the importation and research on human embryonic cells.

Cell therapy: refers to cell transplants aiming to restore the function of tissue or an organ when it has been altered by an accident, illness or ageing. These therapies have benefited from recent scientific advances on stem cells and give millions of patients the hope of regenerative medicine.

Embryonic or pluripotent stem cells: they can renew indefinitely (self-renewal), multiply in a culture and be differentiated into more than 200 types of cell. In the course of development, they are destined to form all types of the body’s tissue.

Coronary bypass: a technique that enables the redirection of the bloodstream towards the cardiac muscle, by using a graft (coming from the saphenous vein or from a thoracic artery….) One end of the graft is connected to the aorta, the main artery supplying the coronary arteries; the other end is connected to the coronary artery, situated just behind the site of the obstruction. This creates a detour enabling the oxygenated blood to circulate towards the heart.

You just finished a good meal and are feeling full? Researchers from the CNRS, Inrae, University of Burgundy, Université de Paris, Inserm, and University of Luxembourg1 have just revealed the mechanisms in our brains that lead to this state. They involve a ...