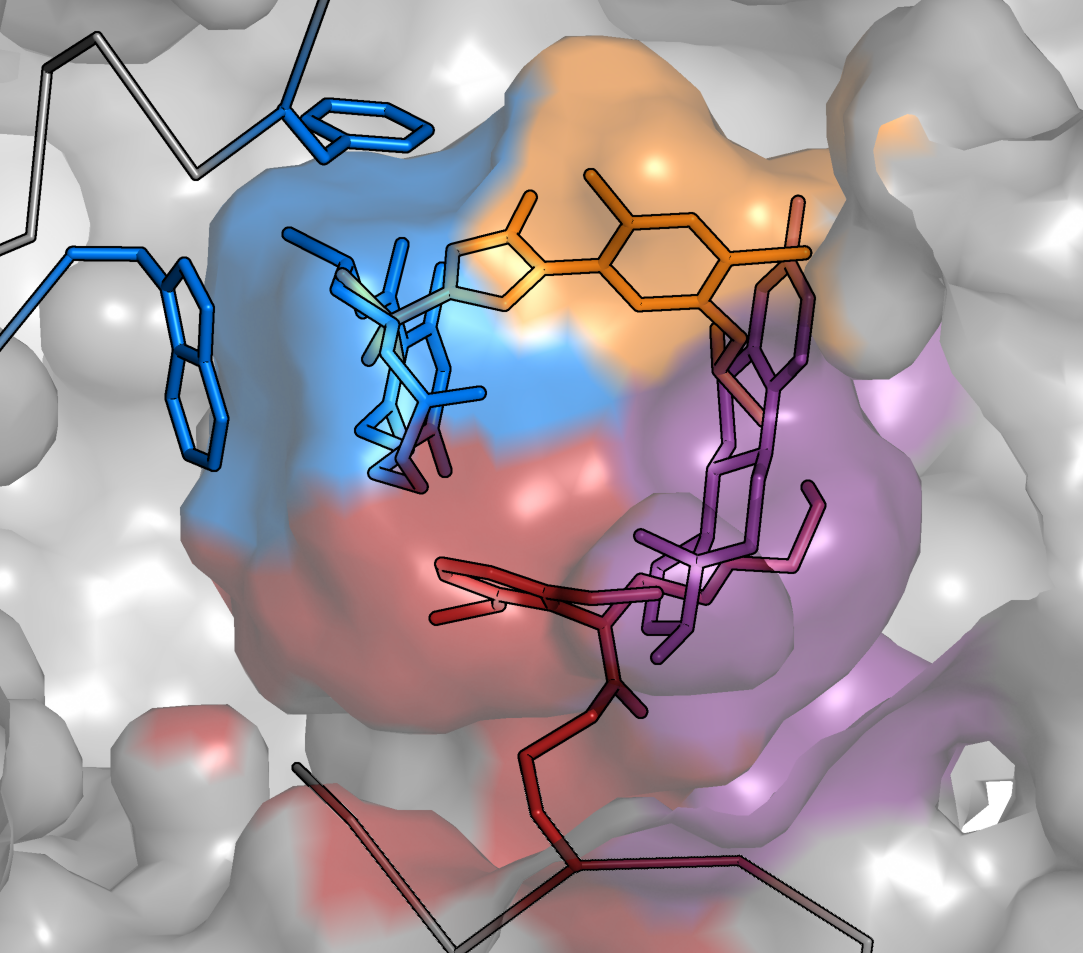 The PXR receptor has a large cavity made up of four pockets (shown in blue, orange, purple and red), which can accommodate several endocrine disruptors at once (their color corresponds to that of the pocket in which they bind). © Vanessa Delfosse

Endocrine disruptors can potentially become more harmful if mixed. Following on from research published in 2015, scientists from Inserm, Université de Montpellier and CNRS at the Structural Biology Center and Montpellier Cancer Research Institute continue to decipher the molecular mechanisms behind this phenomenon known as the “cocktail effect”. While their research provides a better understanding of the complex interactions between endocrine disruptors and the body, it is still in its infancy and must be continued in order to define the real impact of these combinations on human health. Their new study has been published in the journal PNAS.

Scientists continue to elucidate the health effects of environmental pollutants, such as pesticides, residues from medicines, or chemical compounds used in cosmetics and food products. Some of these substances are capable of binding to receptors that are present in or on human cells, in the place of endogenous molecules.

It is at this point that these compounds are referred to as “endocrine disruptors” and may present a risk if they lead to the disruption of certain physiological mechanisms.

The toxicity of several such compounds has already been documented – for example bisphenol A, the exposure to which is linked to an increased risk of certain cancers, metabolic disorders and reduced fertility, or phthalates, which can impair reproductive function.

Researchers are also studying the “cocktail effect”, which is the effect that a mixture of these different substances can have on health. An essential endeavor, given the permanent presence of hundreds of endocrine disruptors in the environment. They rarely act in isolation on human health, but add up and form combinations that can in some cases be harmful.

The scientists had previously shown that two of these compounds, namely 17α-ethinylestradiol (used in certain birth control pills) and TNC (a banned organochlorine pesticide that persists in soils), can bind simultaneously to the same receptor present in the cell nucleus. This receptor, called PXR, controls the expression of different genes involved in regulating various physiological functions.

By binding to this receptor, each of these two endocrine disruptors attracts the other, increasing the amount of product that is bound. An effect that is referred to as “synergistic”, meaning that the function of PXR is altered at much lower doses with this combination of substances than with the individual components, and with a potentially toxic effect.

New advances in the understanding of the molecular mechanism

In the new study published in PNAS[1], the researchers went further in understanding this phenomenon by using a method called “crystallography” which makes it possible to observe chemical bonds at the atomic scale, as well as cellular models and in vivo amphibian models. They studied the interactions between the PXR receptor and 13 endocrine disruptors, alone and then in pairs, selected for their affinity with the receptor, their chemical diversity, and their persistence in the environment. The researchers also looked at the impact of these interactions on PXR activity and on the expression of the genes it controls.

They discovered that the PXR receptor actually has four pockets with specific molecular and physico-chemical characteristics. This allows substances with very different structures to interact with and bind to it simultaneously. In addition, PXR exhibits a high level of plasticity, enabling the binding of various unexpected combinations of molecules. By studying the expression of the genes controlled by PXR for each pair of endocrine disruptors that can bind to it, the research teams found that only certain combinations have a strong synergistic effect.

In addition, the researchers also looked at another receptor, RXR, with which PXR combines in order to bind to DNA and regulate gene expression. Using a combination of three endocrine disruptors, they found that the activation of RXR by one of the compounds further reinforced the synergistic effect of the other two PXR-linked disruptors. This mechanism therefore further increases the toxicity of the mixtures.

“This research enabled us to deepen our understanding of the cocktail effect of endocrine disruptors: molecules with a highly variable structure can interact indirectly within the body to obtain mixtures that are toxic to health in both in vitro and animal models, explains William Bourget. And this is just the beginning: while we have discovered a mechanism that explains some of the synergies, these interactions remain complex and others probably exist. These findings do not at this stage make it possible to predict the real impact of these combinations on human health“, he warns.

Although this research focused on PXR, other receptors in cells resemble it and will be the subject of future research by the teams. Ultimately, they hope to elucidate the extent of the phenomenon and above all be able to predict the harmful cocktail effects of several endocrine disruptors. “We are tackling this by combining artificial intelligence with our algorithms. It works for some substances taken alone, but more research is needed into the cocktail effects, which are still very difficult to predict”, concludes Bourguet.