The ‘Constances’ cohort, a research network unique in France

Already, more than 65,000 volunteers have been included from the 200,000 expected and 41 research projects have begun.
Two years after its launch, the ‘Constances’ cohort is gathering health related data on more than 65,000 volunteers aged from 18 to 69 years who are affiliated to the general social security system and have been selected at random. Each volunteer gets a health check at a (National) Health Insurance Health Centre (CES) and fills in annual questionnaires. They accept that data relating to them, such as health care consumption, hospitalisation or their socio-professional status may be monitored by researchers from the Constances cohort. Eighteen CESs are involved in 17 French departments. Constances is jointly run by Inserm, the University of Versailles-Saint-Quentin-en-Yvelines, the (National) Health Insurance Scheme and the Pension Insurance Scheme, with the support of the General Directorate of Health.The Constances cohort will enable the gathering of data which can be used for research purposes and public health policy. Additionally, the very large number of people monitored will enable the study, on an unprecedented scale, of the long-term impact of different factors (pollution, eating habits, medicinal treatments, place of residence…) on the health of France’s living population.

“The true originality of Constances is to have been conceived from the outset as an epidemiology laboratory open to all research teams in a spirit of sharing. Substantial work has been carried out in order to respect the confidentiality of data, in accordance with the laws on data protection and freedom of information” points out Marie Zins, scientific leader of this cohort. 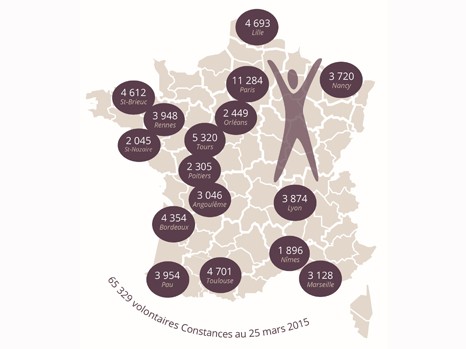 Distribution of volunteers of the Constances cohort as at 25 March 2015 (© Inserm/M. Nachtigal)

This French national cohort of adults is strongly supported by CNAMTS (French National Health Insurance Fund for Employees) and has the benefit of funding from the ‘Investing in the Future Programme’.

The size and function of the cohort are equivalent to other large cohorts being developed in Europe, particularly in Germany. In the long term, such European collaborations lead to research on a grand scale and unprecedented international comparisons.

The next selection of research projects by the Scientific Council will take place in July 2015.

Are you a volunteer? Do you wish to participate? Details and conditions can be obtained by writing to contact@constances.fr and on the website www.constances.fr

Even at Low Doses, Exposure to the Endocrine Disruptor DEHP Impairs Tooth Development

Some endocrine disruptors have already been associated with an impaired quality of tooth enamel. After demonstrating the harmful effects of bisphenol A on tooth development, a team of researchers from Inserm, Université Paris Cité and Sorbonne Université, at the Cordeliers Research Center ...