The French are overweight – confirmed by the Constances cohort

Nearly one in two French people over 30 years of age are overweight. This is what the first results from the Constances cohort has revealed. Now supported by Inserm and the French national social security organisation for salaries workers (Cnamts), Constances collates health data on more than 110,000 French people. With ultimately 200,000 people monitored, Constances will provide varied indicators of health in the population, such as the influence of various factors on the occurrence of disease or the impact of preventive measures.

These results are published in the Bulletin Epidémiologique Hebdomadaire (BEH ) from Santé Publique France.

The Constances cohort is a unique research project in France, launched in 2012 following a pilot phase in 2009. Constances now collates health data from more than 110,000 volunteers aged 18 to 69. The volunteers, members of the French general social security system, were selected at random. Every 5 years, they are invited to undergo a health examination in one of 22 health examination centres run by the social security system spread over 20 regions, completing a questionnaire every year. Involving the health examination centres in implementing the Constances cohort is consistent with their historical role among people falling outside the French healthcare system.

“Data from the cohort are used to analyse the state of health of the French population and to give a better understanding of what happen throughout life. After several years spent recruiting, we have been able to analyse the data and provide the first estimates, particularly about the prevalence of excess weight and obesity” explains Marie Zins, Inserm coordinator of the Constances cohort.

Regarding the prevalence of excess weight and obesity, data have been studied from nearly 29,000 participants aged 30 to 69 years old in 2013. Nearly one in two French people could be overweight and general obesity, defined as a BMI > 30 kg/m2, could be close to 16%, although abdominal obesity, defined as a waist measuring ≥ 94 cm for men and ≥ 80 cm for women, proves to be much more common (between 41.6% and 48.5%). 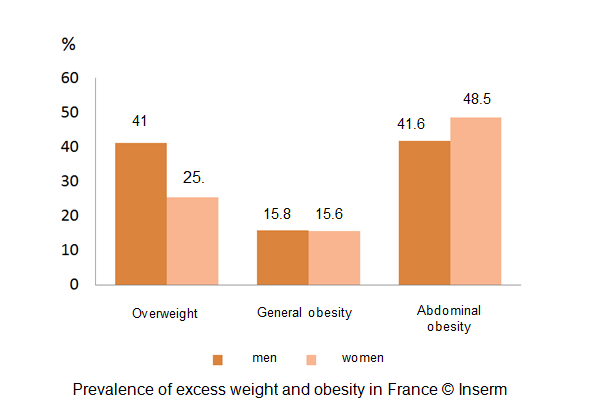 These data confirm the trends observed in the ObÉpi survey (2012) that collects data every three years on the prevalence of excess weight and obesity. In this survey, participants are asked by telephone about their waist measurement and their weight. In Constances, unlike the ObÉpi survey, the protocol for measuring BMI and waist is standardised in the health examination centres, where healthcare professionals take the measurements.

Details about age and income are also included in study and data to identify places/regions, among the areas analysed, where obesity is most prevalent. These are the Nord, where the prevalence of obesity reaches 25.6%, and Meurthe and Moselle (22.9%). Paris is least affected by obesity, with prevalence of 10.7%.

The French national adult cohort is funded by the ‘Investing in the Future’ Programme. Initially set up by Inserm, Cnamts and the University of Versailles-Saint-Quentin-en-Yvelines, the size and operation of the Constances cohort match other large cohorts being set up in Europe. European collaborations already enable very large scale research and unprecedented international comparisons.

Are you a volunteer? Do you want to take part?

Details and conditions can be obtained by writing to contact@constances.fr and on the website www.constances.fr

TO CITE THIS POST :
Press release – Inserm press room The French are overweight – confirmed by the Constances cohort Link : https://presse.inserm.fr/en/the-french-are-overweight-confirmed-by-the-constances-cohort/25515/