The new face of our adolescents

A large survey, coordinated by Inserm Unit 1178, “Mental Health and Public Health,” and the University Division of Fondation Vallée, describes the current situation regarding issues and challenges in adolescence. These data, collected by means of self-administered questionnaires, reflect the perceptions of 15,235 young people attending school, aged 13-18 years, regarding their own adolescence. The study addresses subjects as varied as their physical and mental health, consumption patterns, recreational activities and even sexuality. The results reaffirm the complex nature of these future adults, with marked differences between boys and girls, and an age-related gradient. They should help to improve our knowledge of adolescent behaviours, and help identify new indicators of problems that can be used in the introduction of preventive measures.

75% of adolescents recognise the need for boundaries.

Adolescence, the transition between childhood and adulthood, is a period of complex psychological and physiological upheaval that may cause certain problems and lead to risky behaviours. The “Portraits of Adolescents” survey, coordinated by Inserm Unit 1178, “Mental Health and Public Health,” and the University Division of Fondation Vallée, makes it possible to analyse the “profiles” of these 15,235 young school-goers from their third year of secondary school to the end of the senior cycle, using data collected via anonymous self-administered questionnaires.

Adolescents are far from stereotypicalThe current generation of adolescents is often portrayed as heedless, disenchanted, lazy and more reliant on things than on relationships. This study shows, however, that nearly half of adolescents (48.4%) are confident about the future (especially boys, 58.6%, compared with 38.9% of girls). 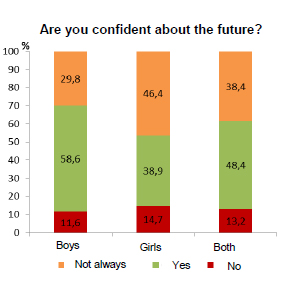 A large majority feel good about their relationships with their parents, and believe that their parents see them in a positive light. Furthermore, most of them judge that adults generally worry too much about adolescents (72.8%).

88% of these young people (90.3% of girls versus 85.5% of boys) believe that their intrinsic value does not depend on the number of things they own. They value themselves in relation to the image they convey to others, their academic results, and their creativity.

Risk taking is, moreover, generally described as an essential part of adolescence. For over a third of these young people (34.1%), to live a good life, “you have to take risks without counting the cost”. These data reflect the well-known ambivalence of adolescents.

Adolescents are aware that the period they are going through is not an easy one: they often question themselves (49.3%), especially girls (61.7% vs 35.7% of boys). Half of them question themselves about the people in their entourage, girls (57.8%) more than boys (49.6%). This period of profound evolution of identity, conducive to risky behaviours, accentuates the psychopathological vulnerability of these young people.

Attempted suicide seems to be more frequent than before: 7.8% of young people have already attempted suicide once, and 3.7%, more than once. Depression affects 16.8% of girls and 7% of boys. Furthermore, 38.9% of young people have already thought that “life wasn’t worth living.” Alarming figures, especially since a very large majority of adolescents (74.5% of girls and 57.6% of boys) prefer isolation as a “way of coping” when they are not feeling good. This makes it less likely that others will become aware of their unhappiness, since friends represent only the third resource, after listening to music (mostly girls) or playing video games (mostly boys). We can also be concerned about figures for young “subdepressives” or mild depressives: 33.6% of girls and 21.6% of boys, strongly increased compared with the last available data.Although the goal of this study was to better understand adolescents’ self-perception, this report contains many results, particularly with regard to:

-Their relationship with social networks:

88% of adolescents are on social networks. For 76.9% of them, this choice is justified by the presence of friends on the same network.

-Their use of psychoactive substances:

Generally, girls use mainly tobacco (9.2% of them claim to be “hooked,” compared with 7.8% of boys), while boys use mainly alcohol, with worrying figures for binge drinking in the month prior to the survey (37.6%). 7.1% of young people are regular users of cannabis.

10.7% of boys versus 4.2% of girls state that they had sexual relations before the age of 13 years, which remains a worrying figure.

The vast majority find school tiring, stressful and irritating, or even painful. Only a third of young people find it enjoyable, although they believe it to be essential.

Sport, music, friends, the Internet and computer games (especially boys) are the most popular pastimes among adolescents.

A study by Inserm and Dijon University Hospital based on French nationwide data on around 130,000 patients hospitalized for either COVID-19 or seasonal influenza shows that the mortality rate among those admitted for COVID is three times higher than that of seasonal ...