There is current over-treatment of prostate cancer in France

Research conducted by Cyrille Delpierre (INSERM Unit 1027 “Epidemiology and Public Health Analyses: Risks, Chronic Illness and Handicaps”) in collaboration with the French Cancer Registers Network assessed the proportion of patients potentially suffering from prostate cancer and currently over-diagnosed or over-treated in France. According to a study performed on 1840 patients, current over-treatment involves a considerable number of patients being treated for a cancerous tumour in what is known as Stage T1 (early tumours) and, to a lesser extent, patients suffering from tumours in stage T2 (more advanced tumours). These figures should be taken seriously because over-diagnosis or over-treatment can be associated with undesirable side effects such as impotence or incontinence.

This work has been published in the review Cancer Epidemiology. 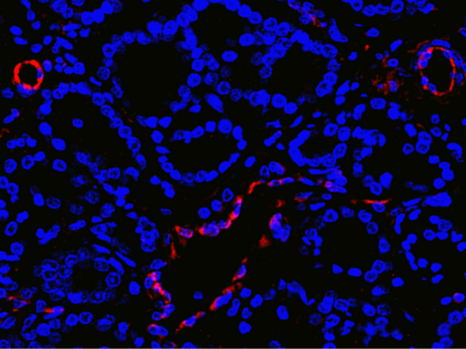 The generalised use of the PSA[1] test for prostate cancer treatment has led to earlier diagnosis of the condition. This development is an advance in itself, since the early stages are less serious and thus easier to cure. But not all prostate cancers are equally aggressive; like many diagnostic tests, the administration of PSA detects tumours more easily, including those that grow at a slower rate. Consequently, a considerable number of tumours diagnosed from a PSA test develop very slowly, thus exposing patients to the risks of over-diagnosis or over-treatment.

In the absence of markers that make it possible to identify tumours that are specifically aggressive, the main difficulty with prostate cancer diagnosis lies in assessing the benefits for the subject, taking account of the risks of over-diagnosis and over-treatment (which can vary between 30% and 50% according to the literature). It is therefore necessary to compare theoretical life expectancy, and thus to assess such cancers correctly. In practice, if the patient’s life expectancy exceeds 10 years, a period considered necessary for a cancer that has become clinically significant, the treatment is justified.

The purpose of the study conducted by Cyrille Delpierre was to assess the extent of the potential actual over-diagnosis and over-treatment for prostate cancer in France, by taking account of comorbidity rates liable to seriously affect theoretical life expectancy.

The sample consisted of 1840 patients diagnosed in 2001. The proportion of patients over-diagnosed and over-treated was assessed by comparing theoretical life expectancy (taking co-morbidity into account) to life expectancy for those living with the cancer.

It was possible to identify patients in a potential over-treatment situation, i.e. those whose theoretical life expectancy was less than their life expectancy when living with cancer, and among the latter group to discover whether they had actually been treated (either through surgery or through radiotherapy) and thus genuinely over-treated.

Two per cent of patients with stage T2 tumours had been over-treated, making 2% of patients who had had a prostate ablation and 4.9% who had received radiotherapy.

The presence of a co-morbidity considerably increases these proportions. Patients at stage T1 with more than two comorbidities were in a potential over-treatment situation in almost all cases and were actually over-treated in one third of all cases.

“One of the major limits in our study was working with patients diagnosed in 2001. The present situation is different. But the most recent data covering 2008 show inverse proportions of stages T1 and T2. T1 stages are now more frequent than T2. The proportion of minor stages during which a higher risk of over-treatment has been observed is now on the increase”, explains Cyrille Delpierre.

The research highlights that there is a significant proportion of actual over-treatment, mainly observed in patients with co-morbidity.

The main question for researchers around the debate as to the usefulness of PSA, and more generally surrounding all diagnoses, is there for not the test in itself but rather the choice of appropriate treatment.

Diagnosis is a process that starts with the offer of a PSA test, followed in the case of positive results by diagnostic examinations and suitable treatment if disease is detected. “In view of the over-treatment of prostate cancer that has been confirmed, treatment could be restricted, especially for patients with co-morbidities, to supervision that would make it possible to offer the treatment when it becomes appropriate”, proposes Cyrille Delpierre.

Over-diagnosis: the time between diagnosis and the emergence of clinical symptoms and/or death from cancer may be higher than life expectancy, since the cancer will not manifest itself or at least will not kill the person. This situation corresponds to the situation known as over-diagnosis.

Over-treatment: the decision to use an invasive treatment may be the origin of over-treatment when treating a cancer that has not been particularly intrusive during the life of an individual.  It is therefore not always in the patient’s interest to be diagnosed and treated for a tumour that is unlikely to develop much, by using treatment that have undesirable side effects.

TO CITE THIS POST :
Press release – Inserm press room There is current over-treatment of prostate cancer in France Link : https://presse.inserm.fr/en/there-is-current-over-treatment-of-prostate-cancer-in-france/8801/