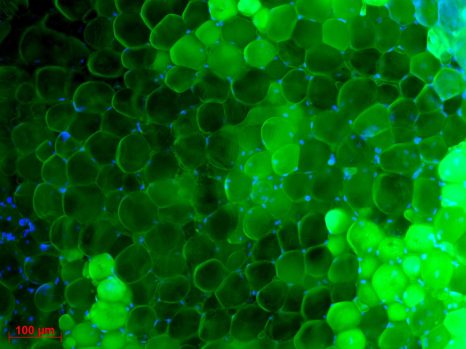 Type 2 diabetes is a major public health problem that affects millions of people worldwide. Developing new drugs to help better treat its underlying causes is therefore a research priority. In a new study coordinated by Inserm researcher Vincent Marion in collaboration with the University of Birmingham (UK), Monash University (Australia), and along with Alexander Fleming, former senior endocrinologist at the US Food and Drug Administration (FDA), the scientists have developed PATAS, a peptide that is part of a new class of antidiabetic drugs. PATAS can correct the metabolic abnormalities leading to type 2 diabetes and its associated comorbidities which include insulin resistance[1]. PATAS works by specifically targeting the adipocytes (fat cells)[2], restoring glucose entry and thus correcting and re-establishing the metabolic physiology of the adipose tissue. The teams hope to set up a clinical trial soon to test this new therapy. Their study has been published in the journal Diabetes.

Diabetes mellitus is a chronic condition that affects 537 million people worldwide, with the majority affected by type 2 diabetes. The prevalence of type 2 diabetes, which is characterized by high levels of glucose in the blood (see box), has been increasing for decades due to population aging, inactivity, and poor diet. The age of onset is also decreasing, and although the disease is considered to be an “adult disease”, it is now seen frequently in adolescents and children.

Available drugs treat the consequences of type 2 diabetes by focusing mainly on lowering blood glucose; they do not target the underlying biological mechanism that causes the disease.

Despite the urgency for developing new and more effective treatments, there have been no disruptive therapeutic innovations to reach market in over a decade.

And this is precisely the objective of the research led by Inserm researcher Vincent Marion and his team at the Medical Genetics Laboratory (Inserm/Université de Strasbourg). In a recent study in collaboration with the University of Birmingham and Monash University, the scientists have developed a product called PATAS in a new class of diabetes drugs called “Adipeutics” (for therapies that specifically target the adipocytes).

Their study, conducted on animal models, shows that this new therapy specifically restores glucose uptake in the adipocytes, resulting in the treatment of insulin resistance with beneficial effects on the whole body. This is made all the more promising by the fact that treating insulin resistance has the potential to address not only type 2 diabetes but a large array of serious medical conditions that result from this resistance.

Diabetes mellitus is characterized by excessive blood glucose levels over a prolonged period of time: this is known as hyperglycemia.

Hyperglycemia is caused by a reduced sensitivity of the cells, particularly those in the liver, muscle, and adipose tissue, to insulin. This is known as “insulin resistance.”

Insulin is a hormone produced by the pancreas whose role is to facilitate the entry of glucose into the body cells as their main source of energy. To meet the increased demand for insulin caused by the cells’ resistance to this hormone, the pancreas produces even more insulin, depleting the body requirements. Insulin production then becomes insufficient and the blood glucose levels rise as a result.

The role of adipocytes

This study follows on from years of rigorous, in depth work carried out in the lab. In previous research, published in Diabetes in 2020, the scientists had identified a new therapeutic target for type 2 diabetes when investigating at an ultra-rare monogenic disease known as Alström syndrome.

The scientists had shown that adipose tissue abnormalities caused by a dysfunctional protein called ALMS1 led to extremely severe insulin resistance associated with early-onset type 2 diabetes in people with Alström syndrome. In animal models, restoring the function of this protein within the adipocytes re-established blood glucose balance.

The teams then went on to focus more closely on ALMS1 and how it interacts with other proteins within the adipocytes. In particular, they have shown that in the absence of insulin, ALMS1 binds to another protein called PKC alpha. The activation of insulin in the adipocytes induces the separation of these two proteins ALMS1 and PKC alpha, resulting in glucose entry into cells. In people with diabetes, who are insulin-resistant, this link between the two proteins is maintained.

Drawing on this knowledge, the scientists have developed the peptide PATAS, which works by breaking the interaction between ALMS1 and PKC alpha – thus restoring insulin signaling in the adipocytes.

In mouse models of diabetes, PATAS has been able to re-establish the normal physiology of the adipocytes by restoring glucose uptake. “Thanks to PATAS, the adipocytes that could no longer access glucose were once again able to absorb it and then metabolize it in order to synthesize and secrete lipids which are beneficial to the entire body. These positive effects are visible in our animal models, with a marked improvement in insulin resistance. Other parameters and comorbidities are also improved, including better blood glucose control and decreased liver fibrosis and steatosis,” explains Vincent Marion.

These promising results in animals have paved the way for the researchers to organize a clinical trial as soon as possible, in order to test PATAS in humans. The successful development of a new class of antidiabetic drugs could have significant implications for public health, not only to treat type 2 diabetes but also many other cardio-metabolic disorders in which dysfunctional adipocytes and insulin resistance are very problematic.

In order to create value from these findings and facilitate the organization of such a trial, Vincent Marion has founded the start-up AdipoPharma SAS.

[1] Insulin resistance is when cells in your muscles, fat, and liver do not respond well to the hormone insulin and can’t use glucose from the blood as their energy source. Insulin resistance is the basis of high blood fats, heart and vascular disorders, metabolic syndrome and type 2 diabetes

[2] Adipose tissue is a set of cells known as adipocytes that store fats.

TO CITE THIS POST :
Press release – Inserm press room Towards a New Drug Class in the Treatment of Type 2 Diabetes Link : https://presse.inserm.fr/en/towards-a-new-drug-class-in-the-treatment-of-type-2-diabetes/45614/