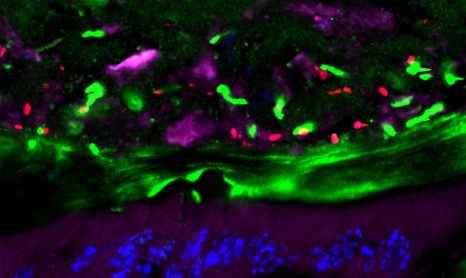 In animals, a vaccine modifying the composition and function of the gut microbiota provides protection against the onset of chronic inflammatory bowel diseases and certain metabolic disorders, such as diabetes and obesity. This research was conducted by the team of Benoît Chassaing, Inserm researcher at Institut Cochin (Inserm/CNRS/Université de Paris), whose initial findings have been published in Nature Communications.

Chronic inflammatory bowel diseases, such as Crohn’s and ulcerative colitis, are linked to abnormalities of the gut microbiota in humans and in animals. The subjects concerned generally present reduced bacterial diversity in their intestinal flora along with excessive levels of bacteria that express a protein called flagellin, which favors their mobility. This enables them to penetrate the layer of mucous that covers the intestinal wall and is usually sterile. The purpose of this layer is to form a bacteria-resistant wall between the internal digestive tract and the rest of the body, thereby protecting it from the risk of inflammation linked to the presence of the billions of bacteria of the intestinal flora.

Previous research had already shown that antibodies are naturally found within this mucous layer, some of which are directed against flagellin. This means that the body spontaneously develops immune protection against flagellin, making it possible to control the presence of the bacteria that express it. With the aim of reducing the risk of chronic inflammation, Inserm researcher Benoit Chassaing and his colleagues had the idea of stimulating this anti-flagellin antibody production in order to reduce the presence of the bacteria that express flagellin in the gut microbiota.

As described in their study published in Nature Communications, the researchers administered flagellin to mice intraperitoneally, thereby inducing a marked increase in the anti-flagellin antibodies, particularly in the intestinal mucosa. The researchers then applied a protocol in order to induce chronic intestinal inflammation, whereupon they observed that immunizing against flagellin gave the animals significant protection from intestinal inflammation. In addition, detailed analysis of their microbiota and intestines revealed not just a reduction in the levels of bacteria that strongly express flagellin but also their absence in the intestinal mucosa, as opposed to the unvaccinated group.

“This vaccine strategy can be envisaged in humans, because such abnormalities of the microbiota have been observed in patients with inflammatory and metabolic diseases. With this in mind, we are currently working on a means of locally administering flagellin to the intestinal mucosa“, explains Chassaing. The researchers are considering, for example, the possibility of developing ingestible flagellin-filled nanoparticles. Finally, in addition to the preventive aspect, they now wish to test this vaccination in curative mode, in animals already presenting chronic inflammatory disease or metabolic disorders.

COVID-19: Together, Remdesivir and Diltiazem Open up New Therapeutic Avenues

As the COVID-19 pandemic continues, finding a treatment to effectively combat the disease remains a major research challenge. Researchers from Inserm, CNRS, Université Claude Bernard Lyon 1 and ENS Lyon at the International Research Center for Infectious Diseases have developed a unique ...