An Edible Mushroom With Potential to Fight Human Genetic Diseases 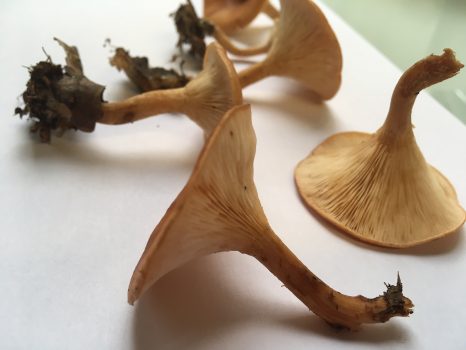 Could a common mushroom help fight certain genetic diseases? Although surprising, this is indeed the new discovery made by French scientists from Inserm, the French National Museum of Natural History, the CNRS, Université de Lille, and the Institut Pasteur de Lille[1]. By examining numerous extracts, the scientists thus evidenced that the mushroom, Lepista inversa, acted significantly on three isolated cell lines taken from patients with cystic fibrosis. This research was published in .Plos One

Approximately 10% of patients with rare genetic diseases such as cystic fibrosis or Duchenne muscular dystrophy (or more common genetic diseases, such as certain types of cancer) have a nonsense mutation, i.e. of a change in DNA sequence. This mutation is evidenced by the presence of a “stop codon” which does not code for a known amino acid and prematurely stops the synthesis of proteins from mutated genes. As a result, the proteins obtained are truncated and do not function properly. Unable to fulfill their role in the body, they have familiar harmful consequences: bronchial obstruction and inability to breathe in cystic fibrosis, and muscular degeneration in muscular dystrophy.

Several strategies are now being developed to correct the consequences of a nonsense mutation. One of the most promising avenues is translational readthrough. This involves the cellular machinery continuing protein synthesis despite the presence of a “stop codon” in the DNA. For this purpose, when the RNA is transformed into protein, “decoy” molecules located in the environment very close to the cellular machinery may catch it unawares and enable a complete protein to be produced, as if there was nothing amiss. Nevertheless, the molecules capable of playing this role and identified to date display very limited efficacy and/or considerable toxicity.

mRNA degradation by the NMD pathway

Figure 1. Therapeutic strategy in stop codon diseases. A nonsense mutation in a gene (DNA) causes the appearance of a premature stop codon on the mRNA which is translated by the ribosome. This triggers the synthesis of a truncated protein and possibly the degradation of this mRNA by the NMD pathway (nonsense mediated mRNA decay), which specifically recognises mRNAs containing a premature stop codon. Certain compounds, by inducing passage through the premature stop codon (an event known as “readthrough”), enable the synthesis of a full-length protein, which could bring therapeutic benefit to patients with a nonsense mutation.

By combining their expertise and using a screening system on the chemical-extract libraries at the French National Museum of Natural History, two teams of scientists[1] succeeded in demonstrating that the extract of a mushroom, Lepista inversa or Clitocybe inversa, is capable of very effectively restoring the expression of human genes presenting nonsense mutations on cells in culture.

Thanks to the partnership between the two research laboratories, the CHU de Lille, Hospices Civils de Lyon, Cochin Hospital, and the charity Vaincre la Mucoviscidose, researchers were also able to evidence significant activity on cells from patients with cystic fibrosis[2].

“Given that only 5% of functional proteins need to be restored in cystic fibrosis to have an impact on the consequences of the disease, this research is extremely encouraging,” according to the authors who point out that this strategy also has the advantage of not affecting the patients’ genetic inheritance.

“This discovery brings hope as this mushroom is edible, although it is not particularly prized for its taste; it is also very common – it grows in the Ile-de-France region, and in various regions of France and Europe,” explains Fabrice Lejeune, Inserm researcher and the last author of this research. “There is still a long way to go before we can develop a genuine therapeutic strategy,” he adds. “We still need to find a way to purify the molecules of interest present in this extract, and then carry out in vivo tests to verify their long-term efficacy and the absence of toxicity.”

This multidisciplinary study also demonstrates the value of the extract collection kept in the extract bank at the museum for teams of biologists and chemists working in the health field.