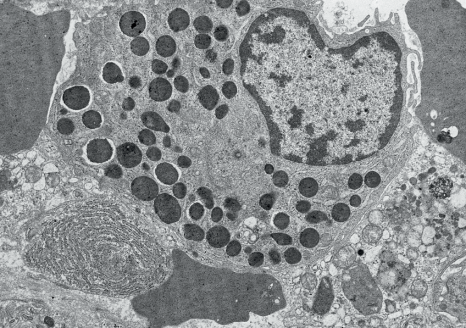 Although the response of various immune cells to SARS-CoV-2 infection has been relatively well studied, that of basophils (a category of white blood cells) had not been characterized yet – mainly because of their rarity in that they represent around 0.5% of the body’s white blood cells. In a new study, researchers from Inserm, Sorbonne Université, Université de Paris, CNRS, Institut Pasteur and Efrei describe how basophils respond to SARS-CoV-2 infection. They show that exposure to the virus activates them, leading to the production of certain cytokines and helping to reduce inflammation and promote the secretion of antibodies. The findings of this study were published in Frontiers in Immunology on February 24, 2022.

Basophils are leukocytes (white blood cells) that play a key role in immune response. They are produced in the bone marrow and make up around 0.5% of all leukocytes. In addition to their role in protecting against parasitic infections, basophils are involved in the response to various allergic inflammatory diseases of the respiratory tract (allergic rhinitis, asthma), gastrointestinal tract (food allergies), and the skin (atopic dermatitis).

– neutrophils, eosinophils, and basophils – in the immune response to SARS-CoV-2 infection. These findings had revealed a smaller number of basophils during the acute and severe phases of COVID-19, followed by an increase in their number up to the disease recovery phase, four months after discharge from hospital. These same basophils were also “activated”: they produced cytokines, molecules enabling communication between immune cells and capable of adapting the immune response to the nature of the infectious agent.

Through in vitro studies of the reaction of healthy basophils exposed to SARS-CoV-2, a team of researchers from Inserm, Sorbonne Université and Université de Paris at the Cordeliers Research Center, from CNRS and Institut Pasteur at the Evolutionary genomics, modeling and health laboratory, and from Efrei wished to describe the cytokine response of basophils more precisely. It observed that the activation of basophils resulted in the production of specific cytokines, known as interleukins IL-4 and IL-13.

These interleukins allow basophils to interact with the other immune cells, especially the T and B cells, and to establish a link between innate and adaptive immunity (see box). For example, IL-4 directs B cells towards the production of antibodies.

Basophils such as neutrophils and eosinophils are innate immune cells, whereas B and T cells are adaptive immune cells.

Innate immunity is an immediate response that occurs in any individual in the absence of prior immunization. It is the first barrier of defense against various pathogens and mainly brings into play pre-formed (natural) antibodies and lymphocytes that do not present receptors specific to the antigen.

Furthermore, the scientists have also shown that when basophils are stimulated by interleukin IL-3, itself produced by the T cells, they produce more IL-4 and IL-13.

These data highlight the potentially beneficial role of IL-3 in COVID-19 patients. Other research findings had already shown that low IL-3 levels in the plasma of patients infected with SARS-CoV-2 were associated with greater severity of the disease.

“More generally, these findings deepen the little scientific knowledge we had until now on the key role played by basophils in immune response and in the context of viral infections. The mechanism by which SARS-CoV-2 induces basophil activation is now the subject of new research,” explains Camille Chauvin, Inserm researcher and co-author of the study.

“Whereas other studies have shown the pathological role of innate cells such as neutrophils, monocytes and macrophages activated by SARS-CoV-2, we found potential beneficial effects of the activation of basophils by the virus. Being able to modulate basophil activation, via IL-3 for example, could potentially allow us to regulate the protective antibody response to a viral infection such as SARS-CoV-2,” concludes Jagadeesh Bayry, Inserm Research Director and last author of the study.

Teams from AP-HP, Sorbonne University and Inserm at the Pierre Louis Institute of Epidemiology and Public Health, coordinated by Dr Youri Yordanov and Prof. Agnès Dechartres, assessed the clinical characteristics, fate and factors associated with hospitalization or death of ambulatory patients followed ...