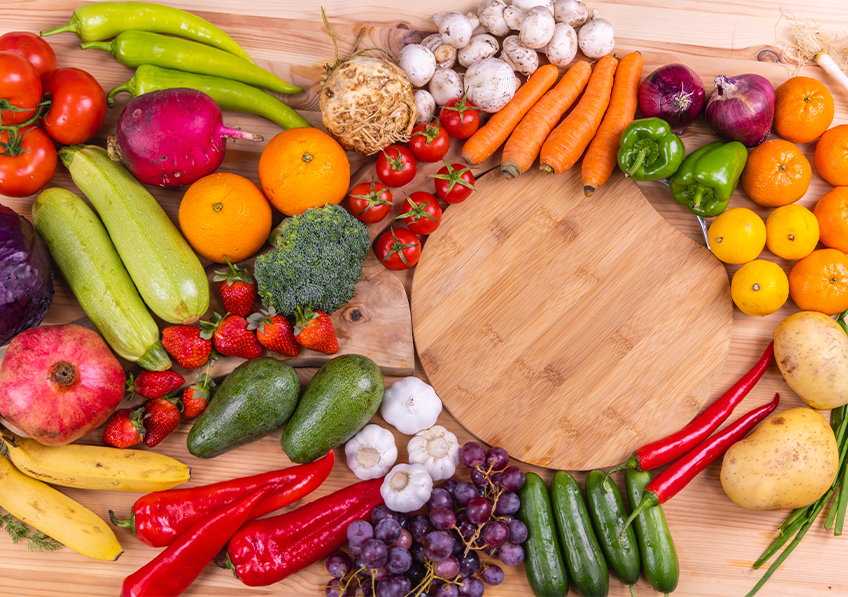 Fruit and vegetables, some of which contain carotenoids © Engin Akyurt/Unsplash photos

A Mediterranean diet – high in fruit, vegetables, legumes, whole grains, olive oil and oily fish – may prevent the development of age-related macular degeneration (AMD), which is the leading cause of visual impairment in people over the age of 50. A new study published by researchers from Inserm and University of Bordeaux at the Bordeaux Population Health Research Center reveals in an unprecedented way a link between circulating carotenoids – plant pigments that protect the retina – and the reduced risk of developing advanced AMD. Based on the follow-up of 609 people over an eight-year period, this research constitutes the first longitudinal study to identify this link and has been published in the journal Nutrients.

Age-related macular degeneration (AMD) is the leading cause of vision loss in industrialized countries. This degenerative disease affects the central part of the retina, which is crucial for daily living tasks (reading, driving, recognition of faces, etc.). At an advanced stage, it takes two forms: the neovascular “wet” form which is treated with anti-VEGF[1] injected directly into the eye, and the atrophic “dry” form for which there is no treatment at present.

Although there is no cure, it is possible to prevent or slow the progression of the disease. We are already familiar with the risk factors for AMD, which are linked to age and genetic background – factors which we cannot do anything about.

For the past twenty years, researchers have studied the link between nutrition and AMD. We now know that many foods make it possible to slow the degeneration: fatty acid (omega 3), antioxidants (vitamin C, zinc, etc.). These protect the macula, the area of the eye affected by the disease and which is located in the center of the retina.

Through a prospective study based on the eight-year follow-up period of the ALIENOR cohort, the researchers’ objective was to study the link between the presence of lutein and zeaxanthin in plasma and the development of AMD.

Lutein and zeaxanthin belong to the large carotenoids family and are notably found in yellowy-orange fruit such as citrus and tomatoes, as well as in leafy green vegetables such as spinach, cabbage, and chard. Highly concentrated in the macula, these pigments play a very specific role for the eyes. Our bodies do not synthesize them, which is why we have to get them from our diet.

Unlike previous studies, based only on information given by participants about their diet, the team of Inserm researcher and study author Bénédicte Merle analyzed blood samples and demonstrated an objective link between circulating levels of lutein and zeaxanthin and a reduction in the risk of AMD.

This research reveals that higher plasma levels of carotenoids, particularly lutein and zeaxanthin, reduce the risk of developing advanced AMD by 37%.

This result remains similar, whether the form is atrophic or neovascular. However, apart from lutein and zeaxanthin, no other carotenoids have been associated with such a reduction in risk.

Lutein and zeaxanthin provide real protection to the retina. They absorb blue light, which is known to damage it over the long term, and act as antioxidants to protect it from oxidative stress[2] – which is a factor of AMD.

ALIENOR is a population-based study aiming at assessing the associations of age-related eye diseases with nutritional factors. For this research, 609 participants with an average age of 73 years were recruited between 2006 and 2008. At enrollment they had a blood test to measure their plasma levels of lutein and zeaxanthin. They then saw an ophthalmologist in order to diagnose AMD. Among them, 54 developed AMD during the eight-year follow-up period.

What to eat to prevent or slow the progression of AMD

For sufficient plasma levels of lutein and zeaxanthin, yellowy-orange fruits and vegetables should be preferred (tomatoes, carrots, citrus fruits), and leafy green vegetables (cabbage, spinach). “In addition to this, the most beneficial diet for preventing AMD is a Mediterranean diet high in fruit and vegetables and enough omega 3 from oily fish,” emphasizes Merle.

Beyond the nutritional recommendations, the discovery of the role of these carotenoids opens up avenues for identifying the population groups most at risk of developing AMD based on their diet. This study therefore offers strategies for prevention but also for the identification of risk factors that will be useful for the future of research.

[1] Anti-VEGFs are novel therapies that act on the cell membrane and are often used to prevent tumor survival.

[2] Oxidative stress refers to the various aggressions of our body’s cells caused by molecules derived from oxygen. The most well-known of these harmful substances are free radicals.