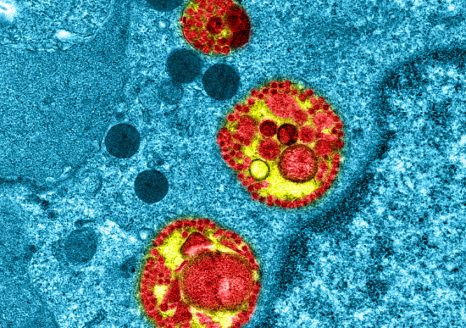 What are the molecular and genetic characteristics that distinguish patients with critical forms of COVID-19 – and particularly acute respiratory distress syndrome (ARDS)? To answer this question, researchers from Inserm and Université de Strasbourg at Unit U1109 Molecular Immunology and Rheumatology, in collaboration with clinician-researchers at the Strasbourg University Hospitals, have investigated the biological and genomic data of a targeted cohort of young patients. Patients hospitalized in intensive care with ARDS were compared with COVID-19 patients hospitalized in a non-critical care ward.

As part of a Franco-US collaboration with researchers from the company Genuity Science in Boston and the University of Southern California in Los Angeles and using the most advanced artificial intelligence techniques to interpret these data, the scientists have succeeded in identifying a gene signature that differentiates these critical patients from their non-critical counterparts. Some of the genes included in this signature could ultimately become therapeutic targets for severe forms of COVID-19 or ARDS. The findings from this research have been published in Science Translational Medicine.

COVID-19 varies broadly from one patient to another. While some are asymptomatic, others develop flu-like symptoms. Then there are others who progress towards severe forms of the disease, in some cases developing acute respiratory distress syndrome (ARDS) that requires mechanical ventilation in an intensive care unit. Although this group of patients accounts for only a small proportion of those infected with the virus, its mortality rate is high – reaching around 25%.

While age and comorbidities such as diabetes and cardiovascular diseases are the main risk factors for developing these severe, potentially fatal, forms of COVID-19, scientists do not yet know why some younger and previously healthy patients also develop these forms. In molecular and genetic terms, what is it that distinguishes these patients with severe respiratory symptoms from the others?

There has been research into the subject since the start of the pandemic and some avenues have been identified, but so far each study addressed the question from a single methodological angle, generally focusing only on one aspect – genetic and metabolic factors, immune response parameters, etc.

Young patients with no comorbidities

The scientists from Inserm and Université de Strasbourg, in conjunction with the Strasbourg University Hospitals, were in this case interested in a patient cohort with restrictive and strict inclusion criteria. The patients had been hospitalized during the first wave of the pandemic, were under 50 years of age and had no major comorbidities. A total of 72 patients were recruited into two groups, one consisting of intensive care patients with ARDS and the other of less severe COVID-19 patients hospitalized in a non-critical ward. A “control” group of 22 healthy individuals was also studied.

“We chose to focus on a restricted but very well-defined patient cohort, excluding confounding factors such as age and certain diseases so that we could really study the molecular and genetic mechanisms directly associated with the severe forms, which are exclusively linked to viral infection and not to other pre-existing risk factors,” emphasizes Seiamak Bahram [1], last author of the study.

The scientists collected various samples in order to perform a multi-omics analysis –that is say retrieve and analyze the various genomic, proteomic, transcriptomic (investigation of all messenger RNA) data and other virological, immunological, and serological data from these patients. This allowed them to confirm that ARDS is associated with a major inflammatory state and an immune system surge (the so-called “cytokine storm”).

However, given the considerable mass of data generated as part of this multi-omics analysis, it was impossible to take the interpretation further without the help of artificial intelligence (AI). Thus, in collaboration with the AI Research Institute of Genuity Science [2] , a biotech in Boston (USA), the team was able to identify a network of 600 genes involved in the progression towards the critical forms of COVID-19, thanks to the cross-application of several AI algorithms (including one having run on the quantum computer made available by the University of Southern California in Los Angeles).

As part of this transatlantic collaboration, these large quantities of data were modelled and analyzed with the help of AI, making it possible to more accurately identify five genes that are overexpressed in these patients.

One of them, ADAM9, is a particularly interesting “driver gene,” with previous studies having shown that it interacts with SARS-CoV-2 proteins. The findings obtained here are consistent with that, suggesting that ADAM9 overexpression would “drive” some patients towards severe forms of COVID-19 and ARDS.

The researchers then conducted in vitro experiments which showed that blocking ADAM9 in cell lines is associated with a reduction in the quantities of SARS-CoV-2 in these cells, as well as reduced replication of the virus, thereby confirming not just its importance in critical disease but also its potential as a therapeutic target.

Of course, further studies will have to be carried out to confirm this last point, but the scientists believe that these findings have opened up an interesting therapeutic avenue, especially given the current clinical trials in oncology that are testing monoclonal antibodies which inhibit ADAM9. Therapeutic repurposing strategies could therefore be considered in the longer term.

[1] Professor Seiamak Bahram, a university professor and hospital practitioner, is the director of Inserm Unit 1109, head of the Strasbourg Precision Medicine Interdisciplinary Thematic Institute, and head of the Biological Immunology Department at Strasbourg University Hospitals.

[2] It has since become the company HiberCell

Covid-19 booster doses: start of inclusions in the COVIBOOST trial

The French health authorities recommend that all adults over 18 years of age perform a booster injection with a MRNA to ensure maximum and prolonged vaccine protection. The COVIBOOST trial is designed to study the immune response of the two candidates based ...