Eating well to grow well: discovery of a missing link

Rénald Delanoue, Inserm Researcher, and his colleagues at the Institute of Biology Valrose in Nice (Inserm-CNRS-Université Côte d’Azur) have identified the missing links in the process that regulates the size of an organism based on the richness of its diet. Their research was conducted on Drosophila, an insect that seems very distant from humans, but the study of which has nonetheless enabled many advances in biomedical research. This work is published in the 30 September 2016 issue of the journal Science.

The size of an organism depends on its nutrient intake during development. In the event of a nutrient deficiency during this period, animals modify their growth and become adults of small size, while retaining the correct proportions. This coupling between nutrition and growth involves hormones from the insulin family and IGFs (insulin growth factors); however, the molecular mechanisms that govern this regulation are still not well understood.

Work done by Inserm researchers at the Institute of Biology Valrose (Inserm-CNRS-UCA) has enabled the identification of the substances on which this coupling is based at molecular level in the fruit fly (Drosophila melanogaster). Despite 700 million years of evolutionary divergence, this insect is a relevant model for biomedical research, because it possesses the same physiological processes as mammals.

For example, it is interesting to know that the fat body in Drosophila fulfils the same roles as the liver and adipose tissues in humans. The neurosecretory insulin producing cells (IPCs) are located in the larval brain of the insect, and correspond functionally to the pancreatic β-cells in humans.

Using the Drosophila model, these researchers have already shown that the coupling of nutrition and growth requires communication between these two organs (ndlr fat body and IPCs). Depending on the quantity of amino acids available in the diet, the fat body sends different signals to the brain. The IPCs are able to interpret these, and to secrete the appropriate amount of insulin. A low level of amino acids induces a reduction in insulin secretion and a slowing in growth, and vice versa.

It remained necessary to identify the nature of these remotely acting signals, and the IPC molecule capable of interpreting them to determine the quantity of insulin to be secreted. To do this, the researchers inhibited, one by one, the known receptors on IPCs, and identified the Methuselah receptor, inhibition of which blocks insulin secretion.

The Stunted protein, which binds to this receptor, was known, but had not been linked to the regulation of insulin secretion. And for a reason! This protein is usually found mainly inside the cells, and plays a role in ATP synthesis. It was therefore surprising to find it freely circulating in the haemolymph of the insect (the equivalent of the bloodstream). The researchers showed that the level of circulating Stunted varies with the quantity of amino acids present in the diet. Its suppression disrupts insulin secretion, and gives rise to adults of small size. Finally, they also demonstrated that this “signalling” function of Stunted in communication between two organs is a novel one, and independent of its function in ATP synthesis.

These results, although very fundamental, could nonetheless guide the study of the molecular circuits of certain diseases such as diabetes, obesity or some forms of cancer that depend on hormones and receptors from the same family as those described in Drosophila. Stunted proteins, which have been found on the surface of many cell types, could also play a signalling role in humans. 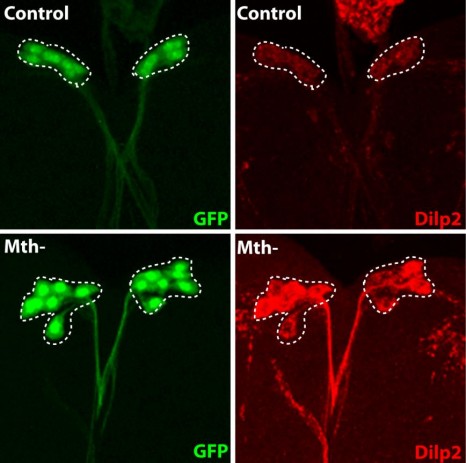 The fluorescent protein GFP (green) is expressed in insulin producing neurons, IPCs (dotted white lines). Secretion of Drosophila insulins (Dilp2, in red) is regulated in these specialised neurons by the presence of the Methuselah receptor. The absence of this membrane protein in Mth- IPCs leads to blocking of insulin (Dilp2) secretion and its accumulation in IPCs (bottom row), compared with the control (top row).